Rectification of Trademark in India: Procedures 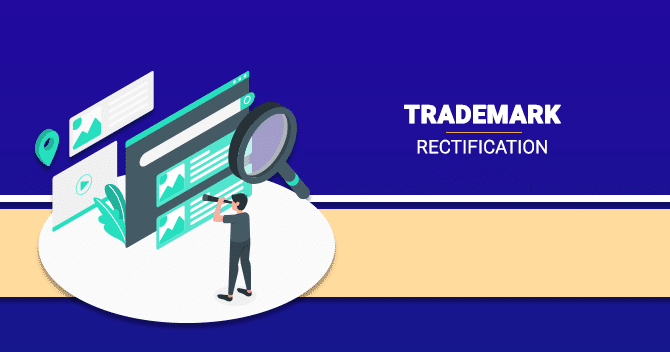 What is Trademark Rectification?

What are the Grounds for Filing of Trademark Rectification?

Various grounds have been set up by the office of the Registrar of Trademarks for rectification, which has is mentioned below: To alter the details of the applicant either be his address or any other information.

Who Can File Petition for Rectification of Trademark?

Any aggrieved party who is affected by such entry may file for trademark rectification on the grounds provided by the Act. A petition for the rectification of trademark cannot be filed anonymously because it has the onus to prove the following facts:

Note-‘Aggrieved person’ means any person whose trading interests get affected by the presence of the registration on the register.

Our Recommendation: Do you want to know the theory of Infringement and Passing off Trademark?

Where to File for Rectification of Trademark?

What are the Documents Required for the Rectification of Trademark?

Procedure for Rectification of Trademark

The application for trademark rectification must be filed with the Zonal Registrar of Trade Marks or with the Intellectual Property Appellate Board (IPAB). The procedure for the rectification of trademark involves the following compulsory requirements:

What are the Precautions needed for the Rectification of the Trademark?

The precautions to be undertaken to prevent the rectification or removal of the trademark from the register is mentioned below:

In this suit for infringement of the plaintiff’s registered trademark ‘COUNTRY INN filed in 2008’, the defendant a registered proprietor of ‘the trademark COUNTRY INN & SUITES BY CARLSON’ filed a written statement in 2009 pleading invalidity of the registration of the plaintiff’s trademark. In 2017, it filed for rectification or cancellation of proceedings in respect of the plaintiff’s logo before the Intellectual Property Appellate Board. Subsequently, it filed another application before the High Court seeking permission to proceed with them and stay of further trial in the infringement and passing off suit until their disposal. The court, however, relying upon the Supreme Court’s judgment in Patel Field Marshal Agencies case, dismissed the application with a cost of Rs. 2 lakhs, considering it to be frivolous, ‘mala fide and an ‘abuse of process of law’. The court held that the defendant is deemed to have abandoned its claim for filing rectification proceedings in view of the fact that these proceedings were filed after a delay of seven years from the date of framing of issues.

Also, Read: What Is Trademark Litigation in India?

How to File an Application Patent R...

The patent is one of the very common modes through which scientific inventions having the poten...

What is Trademark Litigation?

Trademark Litigation is the legal procedure for the perfect resolution of Trademark infringemen...