SEBI introduces a scheme for nomination for MF Unit Holders 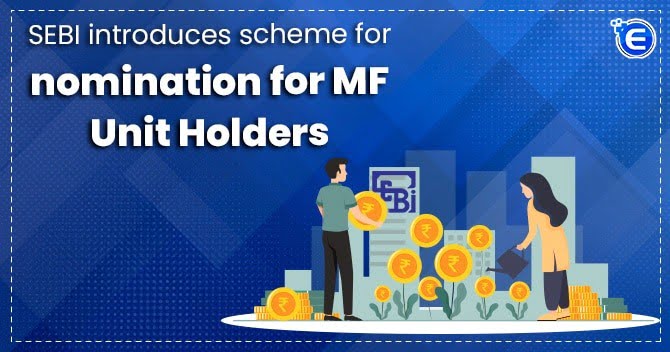 On 15th June 2022, vide circular number SEBI/HO/IMD/IMD-II DOF3/P/CIR/2022/82, a Circular was issued by the Securities and Exchange Board of India (SEBI) wherein SEBI introduced a scheme for nomination for MF Unit Holders. The Circular states that all those investors/unit holders who will be subscribing to mutual funds[1] units from 1st August 2022 onwards will be provided with a choice of providing nomination or opting out of the nomination. For the said purposes, the market regulator has issued a format of the nomination form and opting out of nomination through a ‘declaration form’.

Who are the players to whom the circular on nomination for MF Unit Holders is applicable?

The Circular titled “Nomination for MF Unit Holders” is applicable to the following entities:

What is nomination in Mutual Funds?

The process of nomination is a facility that allows a unit holder in a Mutual Fund to nominate or select a person who can claim the units held by the investor/ unit holder or redemption proceeds in case of death of the unit holder. In case, where the units are jointly held by two persons, then all the joint unit holders are required to nominate a person/ nominee together.

Highlights of the Circular on nomination for MF Unit Holders

With a view to bring uniformity in the practices followed across all constituents in the securities market, the following has been decided in case of nomination for MF Unit Holders:

How is nomination done in Mutual Funds?

Once the nomination has been done, it can be changed at any time and any number of times.

Is it compulsory to nominate anyone?

Earlier, it was compulsory by rule to have at least one nominee in mutual fund investments. However, after this Circular came on 15th June, this compulsion was done away with, and the mutual fund investors have been allowed to invest without specifying a nominee. Investors have now the option to provide nomination or to opt-out of nomination through a signed declaration form.

Eligibility of a nominee

The investor has been given the option to choose any person who can be a friend, family, unknown or even a minor as a nominee. Where the nominee is a minor, the name and address of the guardian of the minor are also supposed to be provided. A Non- resident Indian (NRI) can also become a nominee subject to the exchange control rules from time to time. The facility of nomination can also be extended in favour of the Central Government, State Government, a local authority or a charitable or religious trust.

Who is not permitted to nominate in Mutual Funds?

A guardian who is investing in a mutual fund on behalf of a minor cannot nominate for such units. Further, according to SEBI, the guardian also cannot be a nominee in the same account because it is the sole discretion of the minor when he/she attains majority.

Deadline for complying with the mandate of the Circular

The Circular mandates all the Asset Management Companies to set the deadline as 31st March 2023 for nomination or opting out of nomination for all the existing individual unit holders holding MF units either individually or jointly as mentioned above. Those AMCs who fail to abide by the particulars of this Circular will have all its folios frozen for debits.

This Circular on nomination for MF Unit Holders has been issued by SEBI after exercising the powers conferred on SEBI under section 11(1) of the SEBI Act, 1992, read with the provision of Reg. 77 of SEBI (Mutual Funds) Regulations, 1996 with a view to protect the interests of the investors in the securities and also to promote the development and regulate the securities market.

Read our Article: Procedure for Mutual Funds Registration in India

SEBI’s Restrictions on usage of I...

Recently in the year 2021, many start-ups went public by launching their Initial Public Offerin...

Recently the Securities Exchange Board of India notified of sweeping changes in order to streng...

This article gives the reflection of SEBI relaxation and analysis of SEBI Relaxations to proced...