Scheme of Arrangement for Corporate Debtor going into Liquidation 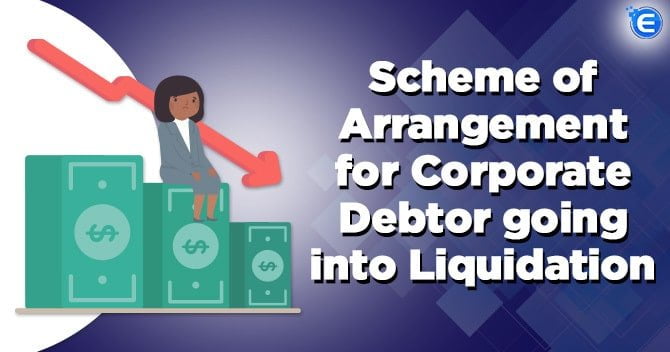 The conundrum as whether section 29A of Insolvency and Bankruptcy Code, 2016 will apply to scheme of arrangement under section 230 of the Companies Act, 2013 has been laid to rest, for time being by the recent ruling of the (NCLAT) National Company Law Appellate Tribunal.

The relevant case is of “ Jindal Steel and Power Limited vs. Arun Kumar Jagatramka & Gujarat NRE Coke Limited (Company Appeal No. 221 of 2018)”.

In this matter NCLAT held that the scheme of arrangement is maintainable under section 230 for the companies in liquidation under IBC. But the same is not maintainable for a person ineligible under section 29A of IBC. The NCLAT has relied upon the observation of Hon’ble Supreme Court in Swiss Ribbons Pvt. Ltd. & Anr. vs. Union of India & Ors. WP No. 99 of 2018, here the primary focus of the legislation was ensuring of revival and continuation of a corporate debtor by protecting a corporate debtor from its management and from a corporate death by the liquidation.

Permissibility of scheme of arrangement in liquidation under the Code has already been upheld in a string of rulings as well as dealt with under the Liquidation Regulations. However, the main concern that arises here is – taking into account the impact of section 29A on the scheme of arrangement.  It is relevant that in Y. Shivram Prasad v. S. Dhanapal & Ors. Company Appeal (Insolvency) No. 224 of 2018, NCLAT explicitly observed that “As the liquidation so taken up under the Insolvency Bankruptcy Code, the arrangement of scheme should be in consonance with the statement and object of the Insolvency Bankruptcy Code, 2016″.

Who all can or who cannot be a proposer?

As prescribed in section 230 of the Companies Act, it is clear that the company or a creditor or member or in case of the company being wound up, the liquidator of a company can start for liquidation process.

In Rasiklal Mardia vs. Amar Dye Chemical Ltd., Company Appeal No.337 of 2018, NCLAT –It was held that liquidator is only an additional person and not an exclusive person who can move the application forward.  Hence, in general, even when the company is under liquidation process under the Code, a creditor, a member or the liquidator can propose a scheme of arrangement under section 230.

However, in the recent ruling of Gujarat NRE, NCLAT, regarding the  position of the creditor is that the creditor and member who is otherwise ineligible under section 29A is also not qualified to be a proposer in the scheme of arrangement. As such, scheme of arrangement under section 230 cannot be said to surrogate route for defaulting promoters to acquire a corporate debtor after the failed resolution.

The rationale is explained according to the design of the Code and the intent of section 29A which the Supreme Court dealt elaborately in Swiss Ribbons matter. Section 29A is directed to the former management from taking control of a falling entity which they could not prosper. When it allows the person to take recourse to scheme of arrangement it defeats its objective.

It is interesting to note that the Insolvency and Bankruptcy Board of India, on Corporate Liquidation Process along with Draft Regulations, discussed the interplay between both section 230 and section 29A. However, there was no conclusive and explicit provision in amended liquidation regulation.

A member or creditor can directly make an application to NCLT as held in Y. Shivram matter. The NCLAT directed that if the members or creditors or a class of them approaches the company through the liquidator for compromise or arrangement by making proposal of payment to all the creditors, then the liquidator on behalf of the company will move an application under the Section 230 to NCLT.

In case there is a proposed scheme of arrangement to envisages a one-time settlement by an outsider, such an outsider will infuse loan into the company to pay-off its existing lenders, without any substantial change in existing shareholding or management structure of the company.

Retention of the existing management or promoters may not be directly hit by section 29A. However, the question arises regarding its tenability needs to be examined. It must be emphasised that an objective of the Code is not to oust the management, but to revive the company, and promote entrepreneurship. While in general, in an incoming resolution the applicant or the scheme proposer would induct fresh equity and managerial resource in the company, there might be cases where the resolution applicant or proposer of scheme of arrangement requires continued presence of existing management for the latter’s expertise, which is necessary for revival of the business. Further, section 29A or any other provisions of the Code does not debar continuation of existing management and promoters. Hence, each case shall be assessed separately.

Who can participate and vote in meetings?

The question is whether a person who is ineligible as per section 29A still can participate and vote in the class meetings. And also if such persons would be entitled to notice of meetings and a copy of scheme?

A consequential concern is whether the number of shareholding of such persons will be included in the numerator or in denominator for the purpose of determining the supermajority requirement. If in case, by referring to section 29A a person is not allowed to vote, then the answer to this question would be a straight ‘no’, for ‘present and voting’ rule.

Section 230 of Companies Act requires that a notice of the meeting must be sent to all creditors and members enclosing therewith a statement containing details of the scheme of arrangement and the effect of the scheme on promoters, creditors, non-promoter members, etc. Further, there is no ban on participation and in voting rights for any member or a creditor. There is no such discrimination as to related/unrelated members, or eligible/ineligible members. If the person is a member or creditor, he will be entitled to vote.

When we look at the corresponding provisions for approval of a resolution plan, then there is no question of directors or members voting if also they are not members of COC, they still are entitled to have a notice of the meeting as mentioned under section 24A and participate for the same. Furthermore, the Supreme Court in Vijay Kumar Jain v. Standard Chartered Bank and Ors., Civil Appeal No. 8430 of 2018, held that those directors, who are interested in resolution plans may be discussed at meetings of the committee of creditors, the copy of such plans must be given as part of documents. The documents need to be furnished along with a notice of such meetings. Moreover, since the directors have given guarantees and they will be bounded by the resolution plans.

The powers vested with NCLT are also to address the objections, if any, to the scheme of arrangement, as also noted by NCLAT in Y. Shriram matter. NCLAT observed in the matter that during proceeding under section 230, if any objection is raised, then it is upto the NCLT to pass the order under section 230 and also to overrule the objections to make the scheme of arrangement beneficial for revival of a corporate debtor. While passing the orders, the NCLT has to play dual role, one as an Adjudicating Authority at the time of liquidation under the Code and other as the Tribunal for passing order under section 230 of Companies Act 2013. Therefore, it is necessary to be open for any member of a corporate debtor, whether he is covered or not covered by section 29A, to invoke the remedy before NCLT.

The issue of applicability of section 29A on section 230 schemes has reached to finality. There are few critical issues such as participation and consent, voting thresholds, etc. that needs further clarification in the framework during the liquidation proceedings. However, it can be said that a section 230 scheme of arrangement does not, in any manner, takes a corporate debtor back to pre-insolvency. The scheme of arrangement will be impacted by the insolvency proceedings which a corporate debtor has been subjected to, so far.

See Our Recommendation: Applicability of CSR Under Companies Act 2013.