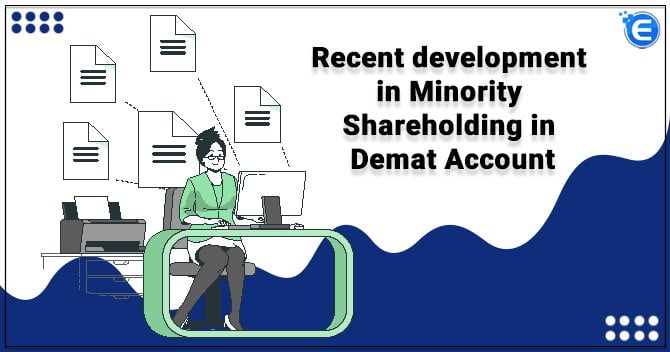 To ensure the smooth implementation of the acquisition of the minority shareholding, the Act of 2013 empowers the company to issue new shares in place of the undelivered shares within the specified time.

In the article, we will look into the process of holding minority shareholders in Demat form.

What are the MCA new rules on the purchase of minority shareholding in Demat form?

MCA, via the notification on 17th December 2020, introduced Rule 26A in the CAA Rules, 2016 to provide for purchasing minority shareholding in Demat form.

The step by step process in relation to the purchase of minority shareholding in Demat form are:

The company needs to verify the details of minority shareholdings in Demat form within 2 weeks of receiving the amount equal to the acquirer’s price of shares.

The cut–off date must not be earlier than one month after sending the said notice. In case of a holiday, then the following date must deemed to be a cut – off date.

The notice served to the minority shareholdings must be published in two newspapers (one in English & one in the regional language) in the district where the company’s registered office is situated & must also be uploaded on the company’s website (if any).

After the publication of the notice in the newspaper & the company’s website (if any), then the company must inform the depository about the cut – off date &submit the following declarations that:

The depository must transfer the minority shareholdings to the designated demat account of the company on the cut – off date except for the shares already credited in the acquirer’s demat account. The said transfer must be intimated to the company.

There is a specific order of Court or Tribunal or any statutory authority, restraining such share transfer & transfer of dividend as per the Depositories Act, 1996; the depository will not transfer the minority shareholdings the designated company’s account.

After the payment for the minority shareholdings is disbursed successfully, then the company has to inform the depository to transfer the shares from the demat account of the company to the acquirer’s demat account.

When the disbursement of the payment is not made within the specified time, then the transfer of shares to the demat account must be done after such disbursement.

Read our article: SEBI’s Proposal for “Recalibration of Threshold for Minimum Public Shareholding Norms on Relisting”

How will the budget affect InvITS a...

The article discusses the new regime of INVITS and REITS. The terminology INVITS stands for - I...

What is the Procedure for Shares Is...

For capitalizing the Profit, A Company may if its article provides issue fully Paid-Bonus share...

This article gives the reflection of SEBI relaxation and analysis of SEBI Relaxations to proced...