RBI issues Directions for Appointment of Internal Ombudsman by NBFCs 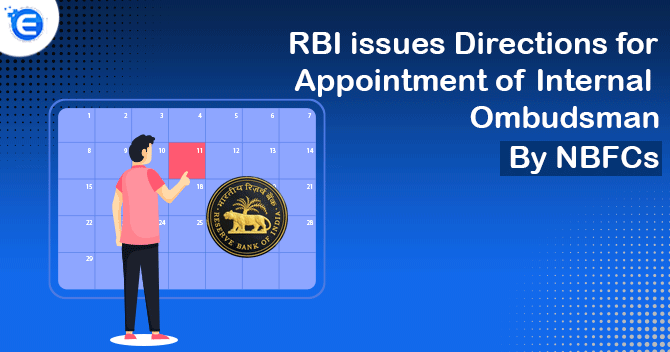 The Reserve Bank of India recently issued a detailed guideline on appointment of an internal ombudsman by NBFCs (Non-Banking Financial Companies). The RBI had announced about the move of introducing an internal ombudsman mechanism for NBFCs in its Statement on Development and Regulatory Policies. In this article, we shall discuss some of the major highlights of the directions notified by the RBI in this regard.

Who is an Internal Ombudsman?

An Internal Ombudsman for NBFCs is one of the measures adopted by the RBI to strengthen the redressal mechanisms within the financial institutions. The internal ombudsman will examine customer complaints related to the deficiency in service that is partly or wholly rejected by the NBFCs.

Appointment of Internal Ombudsman by NBFCs

As per the RBI directions, the following NBFCs need to appoint the Internal Ombudsman:

Further, the RBI also notified certain NBFCs that will be excluded from the applicability of this direction. They are as follows:

Eligibility Requirement for Appointment as an Internal Ombudsman by NBFCs

The following eligibility criteria must be fulfilled by a person to be appointed as an Internal Ombudsman (IO):

You must note that the NBFC can appoint more than one IO as per the number of complaints obtained. Further, the principal nodal officer or the nodal officer liaising with the RBI ombudsman offices or any other official of the NBFC cannot act as the IO or vice versa.

Tenure of the Internal Ombudsman-

The IO tenure will be for a fixed period of not less than 3 years and not more than 5 years. The IO will not be eligible for reappointment or for any extension of his/her tenure in the same NBFC.

The NBFC need to undertake fresh appointment in advance to fill up the vacancy before the tenure of the incumbent IO expires, and the post of the IO should not remain vacant.

The IO should not be removed without the explicit approval of the RBI. If the vacancy arises due to the reasons that are beyond the control of NBFC, then the NBFC should appoint new IO within three months from the date of vacancy arising.

What will be the roles and responsibilities of the Internal Ombudsman?

The IO shall not handle:

The RBI further stated in its notification that NBFCs must formulate a SOP approved by its board and form a system of auto-escalation to the IO for taking final call of all complaints that the NBFCs internal grievance redress mechanism has rejected, partly or wholly.

The NBFC should establish a periodic reporting system of information to the Reserve Bank of India[1]. The IO will be required to furnish periodic reports to the NBFC board, preferably a quarterly intervals but not less than bi-annually. The internal audit system of NBFCs shall monitor the implementation of this direction.

The Reserve Bank issued the notification on appointment of internal ombudsman by NBFCs on 15th November 2021 which covers the qualification and tenure of the IO, its roles and responsibilities, procedural guidelines for NBFCs regarding the complaints referred to the ombudsman, audit and oversight mechanism for IO. The appointment of internal ombudsman by NBFCs will act as a check on their decision. Moreover, it can improve customer experience, including grievance redress practices. IO will be an addition to the present grievance redressal mechanism of an NBFC.

The reserve bank of India on 18 November released the monthly bulletin for November 2022. The R...