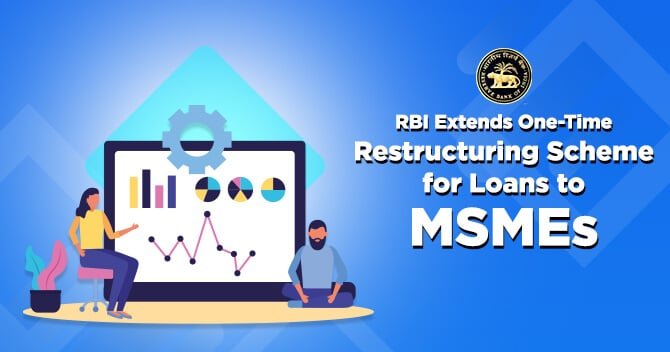 The Reserve Bank of India (RBI) has decided to extend the deadline for a one-time restructuring scheme for loans to micro small and medium enterprises (MSME) by December 31, 2020. This extension of the deadline came as a relief to MSMEs which couldn’t be restructured under the provisions of the circular passed last year, as it gives them a breather of 9 months. The restructuring scheme which was announced last year in January was to expire on March 31, 2020.

This notification from RBI came after the FM laid importance on the MSME sector in her budget speech. The Union Finance Minister in her budget speech said that the government had asked the Reserve Bank of India (RBI) to consider extending the deadline of a one-time restructuring scheme for MSME loans.

MSMEs play an important part in the growth of the Indian economy, contributing over 28% of the GDP and moreover, creating employment for about 11 crore people. To create a positive environment for the MSME sector, RBI permitted a one-time restructuring of MSME Loans for enterprises that were in default but ‘standard’ as on January 1, 2019, without an asset classification downgrade. The deadline to implement the restructuring of the borrower account was set at March 31, 2020, which now has been extended to December 31, 2020.

The one-time restructuring scheme of MSME loans has provided relief to a large number of MSMEs. RBI stated; “As the process of formalization of the MSME sector had a positive effect on financial balance and this process is still in progress, it has been decided to expand the benefit of one-time restructuring scheme of MSME advances without an asset classification downgrade to standard accounts of GST registered MSMEs that were in default as on January 1, 2020.”

In the notification released by RBI, it reemphasized the fact that this process of restructuring MSME loans is a one-time dispensation. As per RBI, the borrowing entity should be GST registered on the date of execution of recast. However, this condition shall not apply to MSMEs, which are exempted from GST registration. Placing the GST condition will reduce the pool of accounts eligible for restructuring, without applying the GST condition the pool would have been much larger.

Applying conditions to the restructuring scheme RBI in its notification stated that all sources of exposure which include non-fund based facilities, of banks and NBFCs to the borrower should not exceed Rs 25 crore as on January 1, 2020.” This restructuring as per RBI will be applicable if the account of the borrower was in default but was a ‘standard asset’ as on January 1 and continues to be classified as ‘standard asset’ up to the date of implementation of the restructuring. However, loans that have already been restructured as per last year’s provision will not be eligible for restructuring under the current circular.

RBIs decision of extending the MSME loan restructuring scheme shows a gradual shift away from RBI’s prior efforts to enhance the quality and transparency of asset classification by banks. The decision came as a relief to MSMEs which were not restructured under the provisions of the circular that was passed by RBI in January last year.

Legal Background of Buyback of Shar...

The term Buyback of Shares means the purchase of own shares by the Company. Buy Back of shares...