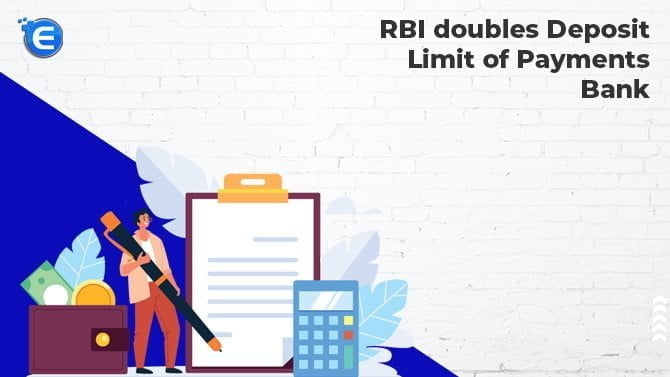 Objective behind doubling the limit of payments bank

The RBI governor Shaktikanta Das stated that with a view to further financial inclusion and to expand the payments banks ability to cater to the growing needs of their customers, this limit has been increased.

The extant guidelines for licensing of payments bank issued on 27th November 2014 permits payments banks to have a maximum balance of 1 lakh rupees per individual customer. Upon reviewing the performance of the payments banks and to encourage their efforts for furthering financial inclusion and to expand its ability to cater to the needs of customers, including the Micro, Small, and Medium Enterprises, small traders, and merchants, it was decided to increase the limit of maximum balance at the end of day from 1 lakh rupees to 2 lakh rupees per individual customer.

From the above, it’s quite apparent that the Reserve bank introduced payments banks in the country to bring about financial inclusion. The main aim is to provide small savings accounts, payments, and remittance services to the migrant labour workforce, and low income households, small business, and other unorganized sector entities.

What are Payments Banks?

Payments banks are differentiated banks when compared with commercial banks. RBI had issued guidelines for setting up of such banks in the country. It operates on a smaller or restricted scale. It can carry out various banking operations but can’t advance loans or issue credit cards.

The objective of setting up such bank is to bring about financial inclusion by providing small savings account and payments/remittance services to low income households, migrant labour workforce, etc.

In 2015, month of August, the Reserve bank had given in-principle approval to 11 entities to start payments bank. Airtel Payments bank was the first to follow suit in the country. India Post Payments Bank started operations at two pilot branches in the month of January 2017. Some of the other popular banks include Paytm Payments Bank and Fino Payments Bank.

Potential impact of doubling the limit of payments bank

This could be a step in the right direction by the RBI[1] after a long battle with payments banks. Although the limits were expected more than from what it is now, but 100% increase could well help in boosting the access of such banks to greater client network and also improve the digital transactions across the country.

We would also see customers park more money in the savings account as the enhanced limit aligns with customers requirements. Rishi Gupta, The managing Director and CEO of Fino Payments Bank, stated that their existing sweep account mechanism helps to save funds of more than 2 lakh rupees and that the raise in limit enhances the cause of financial inclusion and could well benefit its model with incremental revenue expected from enhanced deposit base.

Will it helps customers?

Earlier interest rate on customer deposits were higher, but now these rates have come down terrifically to as low as 2.5% per annum on savings account deposits. According to the report published in Mint, for deposits, these banks are considered safe as the money is below the 5 lakh rupees guarantee provided by the Deposit Insurance and Credit Guarantee Corporation.

So even now, it doesn’t really change. The individual deposit of 2 lakh rupees would still be covered under the Deposit Insurance and Credit Guarantee Corporation insurance scheme that offers an insurance limit up to 5 lakh rupees.

Soon after the above-mentioned guidelines were issued by RBI, the Airtel Payment bank became first such bank in the country to enable 2 lakh rupees day-end balance account limit.

The MD and CEO of the Airtel Payments banks made a statement that the Reserve bank’s decision to enhance the balance limit endorses the role of such banks in furthering financial and digital inclusion in India. He further stated that higher balance limits can enhance the consumer usage of such banks and also enable large sections of informal India to access formal banking quite easily.

It may be noted that Airtel PB has 5.5 crore engaged users and serves them through technology and a retail based distribution network.

The increase in the maximum balance limit of payments bank has been made after gauging the performance of the Payments banks. The RBI noted that the decision of enhancements was made after taking into consideration the progress made by the PBs in furthering financial inclusion and also to provide more flexibility to such banks.

The Reserve Bank of India issued a notification on 23rd March 2020 regarding the Priority Secto...

Investment by Non Residents in Gove...

The Finance Minister, Mrs. Nirmala Sitharaman, with the announcement of the Union Budget on 01...

The article features the key features of the RBI Governor Statement issued on 5th February 2021...