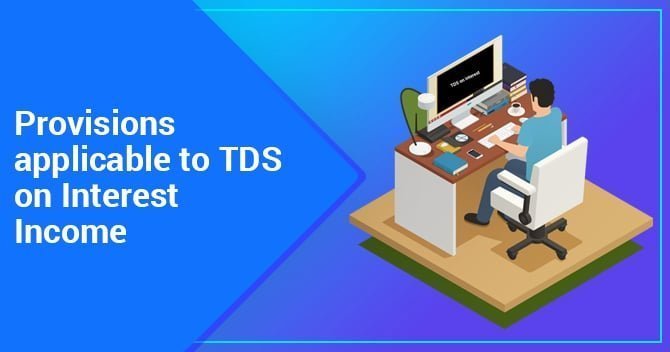 The Income Tax Act provides for a system of tax deduction at the time of generation of income by an assessee. Such tax is deducted by the payer at the time of origination of income in the hands of the payee, and is remitted by the payer to the Central Government on behalf of the payee. Tax deducted at source (or TDS) is levied at a predetermined rate. This article strives to put across TDS mechanism in respect of two major payments, namely TDS on interest on securities and TDS on interest other than securities.

TDS on interest on securities – Section 193

TDS on interest on securities under Section 193 is deducted @ 10% where payee furnishes his PAN details. Otherwise, TDS is levied @ 20%. This 10% rate is applicable both in the case of domestic companies and resident non-corporate assessees.

Some cases where TDS will not be deducted under this section are:

For interest on debentures issued by a company, TDS under Section 193 is not deducted if payment is within the threshold limit as follows:

For example, a partnership firm (Fixe Enterprises) pays interest @10% on loan of Rs. 4,20,000 taken from a resident individual in India. While paying Rs. 42,000 interest on such loan for the financial year 2019-20, Fixe Enterprises has to deduct TDS under Section 194A.

Such TDS is to be deducted by every payer (other than an individual or HUF) who is responsible for paying interest other than on securities to a resident. However, individuals or HUF will also be liable to deduct TDS if their accounts were required to be audited under Section 44AB in the previous FY.

No TDS is to be deducted if the amount of interest payment to the payee during a financial year does not exceed the following limits:

Suppose Twinkle Enterprises, a partnership firm obtains a loan of Rs. 9,500 from an individual residing in Mumbai (friend of one of its partners). The interest on loan for the FY 2019-20 amounts to Rs. 950. In this case, since the annual interest is below the threshold limit of Rs. 5,000, the firm is not liable to deduct TDS while paying interest of Rs. 950. Had the loan amount been Rs. 95,000, then the firm would have deducted TDS on the entire interest amount of Rs. 9,500 (being higher than Rs. 5,000).

To illustrate with another example, suppose Mr. Ganesh earns an annual interest of Rs. 36,000 on a fixed deposit with ABC Bank. The bank will not deduct TDS from the interest to be paid to Mr. Ganesh as it is below Rs. 40,000.

Some cases where TDS will not be deducted under this section are:

TDS under Section 194A is deducted @ 10% where payee furnishes his PAN details. Otherwise, TDS is levied @ 20%.

For example, a partnership firm obtains a loan from Mr. Pankaj residing in Gujarat. The annual interest on such loan amounts to Rs. 65,200 and Mr. Pankaj fails to provide his PAN. In this case, the firm deducts TDS from interest paid to Mr. Pankaj @ 20%, which amounts to Rs. 13040.

The Central Government has designated TDS to be employed as a tool to tax the income (partially or wholly) at the time when it is generated rather than at a later date. This indeed aids in minimization of tax evasion. TDS on interest on securities and TDS on other kinds of interest income are levied @10% by virtue of Sections 193 and 194A of the Income Tax Act.

ITR Refund: Know about the Easiest...

Whenever the gross annual income exceeds the threshold of basic exemption limit of Rs 2.5 lakh,...