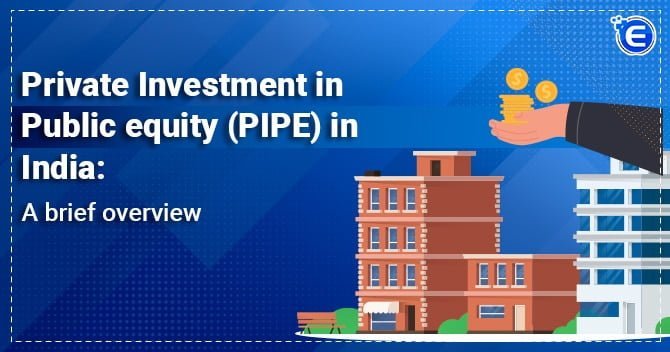 Indian economy has been showing great results and it is counted in among the top performing economies of the world. The economy has also shown strong fundamentals with average GDP for the past five years floating around at the rate of more than 8 percent. Other factors such as big English speaking market, democratic governments, skilled populations, culture of savings and investment combined together have caught the attention of the PE firms and they are keen to make to make investments in the Indian companies. One of the modes of their entry into the Indian market is through Private Investment in Public equity also referred to as PIPE deals.

This piece of writing deals with the meaning of PIPE transactions, the advantages and disadvantages of the PIPE deals and the challenges and solutions to increase PIPE deals in India.

What is Private Investment in public equity (PIPE)?

Sale of securities not through public offering of shares but through a private offering to a select and small group of investors in a publicly traded company is called as Private investment in public equity (PIPE). PIPE is kind of a private placement only. Private investment in public equity can take place in a variety of securities such as common stock or preferred stock, warrants and promissory notes, bonds etc. Such sales are not executed through stock exchanges.

Advantages and Disadvantages of Private Investment in Public Equity

PIPE transactions are not as convoluted and time-consuming affair as a fresh public issue of shares is for a company. In a PIPE deal, a company is able to sell newly issued shares at an agreed price or debt which may be converted into shares in future by the investor. PIPE deals offer a fast, inexpensive and a fast mode of getting into transactions. Certain factors such as difficulty in exit have forced PE firms to look towards publicly traded companies for better returns.

Some of the advantages that PIPE deals bring along with them are as follows:

Opportunities for India in PIPE

India is attracting PE investment because of its strong market fundamentals. Another reason for making India an attractive market for PE investments is the lack of PE opportunities in the North American market and Europe where the deal activity is sluggish couple with tight credit conditions.

A great opportunity has arrived for the emerging small and Medium Enterprises (SMEs) segment of India who are looking to raise funds. This is the place where PE investments can establish themselves as an alternate and viable source of financing the SMEs not only because of their financial capabilities but also because of their ability to offer a global platform to the SME sector. The PE firms can deploy their members as Board of Directors in their investee companies and take proactive part in their governance and operations. Such a step will improve accountability, transparency and corporate governance of the investee company.  On the other hand, the SMEs will also get to benefit from PE investments in terms of alignment of global best practices in their company such as in terms of operations, global human resource management, financial planning and reporting and investor relations.

Because of influx of PE investment, a fillip in growth has been given to the sectors such as back-end-retail, infrastructure, logistics, power, renewable energy, transportation, hospitality and telecommunications. The most neglected sector of the Indian economy i.e. Research and Development sector has also gained momentum from the investment point of view. There was always a concern of lack of investment in Research and Development sector which was a big reason for holding back corporate India. This issue has been addressed by the PE investment where PE backed investments have been found to be twice that of non-PE backed counterparts.

Some other sectors have also gained momentum from the PE backed investments such as education and agriculture where big PE firms have made investments in India such as Kaizen and Robobank. According to some of the reports, around 80 percent of the fund managers are looking forward to invest in the education technology start-ups of India. Separate funds have been established for the purpose of investments in education business only. Similarly, Robobank Group has launched Agri Business Fund which is the first PE fund that is focussed towards investing in agribusinesses in India. A $100 million fund has been established with the vision to boost the growth of agriculture sector by making equity based investments with a focus on the small and medium enterprises and companies in rural areas of India. Attention is also being directed towards the sectors such as microfinance, clean energy and other similar emerging areas.

This does not mean that there are no challenges. In order to attract and develop a robust PE investment ecosystem, both the regulators and Indian businesses need to work towards removing legal, cultural and attitudinal barriers that continue to block the PE investments reach their optimal level.

Challenges to PIPE deals in India

A number of challenges exist which need to be overcome in order to facilitate more PIPE deals in India and take it to their optimum level.

On the other hand, these PE firms would be more inclined towards investing and resurrecting those companies where they have already invested if they wish to achieve windfall gains typical of PE investment.

The concept of Private Investment in public equity is not an old one compared to the countries like USA, the UK, and Israel etc. where such concept has been prevalent for many decades which led to the businesses flourish in these countries. The Indian landscape is only in the nascent stages to attract Private Equity Investmentst. The primary reason why India did not match the growth offered by Private Equity is the regulatory framework which has not been friendly towards the development of Private Equity in India. There exist significant differences between the regulatory framework applicable to PIPE transactions in USA, UK etc. and that of in India which makes it difficult for the investors in the west to make investments through PIPE deals in India. In order to ensure that the legal and regulatory framework does not make the investors wary from investing in India, it is necessary for the Indian regulatory bodies and government to come out with an accommodating and attractive framework for India to become an attractive destinations for PIPE deals to take place.

Read Our Article: The Ease of Fund Raising Via Private Placement of Shares

The concepts of financial planning and wealth management are used interchangeably in financial...

21 Online Business Ideas with Low I...

Online Business Ideas Independent people are always taught to be unique and special. They are b...