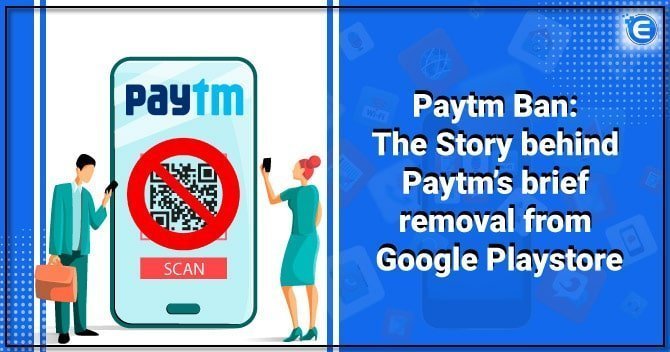 India’s most preferred and popular financial services app- Paytm was briefly taken down from the Google Playstore. However, few hours after being taken down it was restored. In this article we shall take a look at the entire episode of brief “Paytm Ban”.

Paytm Ban: The reason for its removal

Google stated that they neither permit online casinos nor support unregulated gambling apps that facilitate sports betting. It further said that if an app leads customers to an external website that permits them to participate in paid tournaments to win real money or cash prizes, that it violates their policies.

As per industry sources, Google without naming Paytm directly may be hinting at Paytm First Games, a fantasy gaming platform like Dream 11 and many others. However, Vijay Shekhar Sharma, founder of Paytm, in a conversation with one of the news media stated that the problem was surrounding cricket stickers provided by it as a form of cashback.

Google prohibits online casinos and unregulated gambling apps on Google Play store. Fantasy sports platforms such as Dream 11 are also kept out. If an app leads customers to an external site that makes them to participate in paid tournaments to get real money, it is in violation of Google’s Play store policies.

Google Vice President, Product, Security and Privacy, stated that these polices protects users from potential harm. When an app is in violation of these policies, they notify the developer of the violation and take out the app from the play store until the developer brings it back into compliance with its polices.

Authority of Google over Indian App

We have not witnessed this instance of app removal from the Playstore by Google for the first time. Recently another app, Mobikwik was also removed from the Google Playstore. However, it was reinstated into the Google Play store eventually. Paytm founder stressed on the fact that how the ecosystem of Indian applications is dependent and is almost at the mercy of Google. He said that many entrepreneurs faced similar issues in the past.

Paytm defended itself by saying that Google did not provide it an opportunity to explain its cashback sticker feature. It stated that on Friday morning it had received an e-mail from Google play support informing that its app has been delisted as it does not comply with the Google policy around Gambling.

Paytm in its defence stated that its cashback campaign was well within the guidelines and within the laws of the land. It said that it had not broken any rules and ruled out any form of violation and that it is not related to gambling in any way.

In its response to the allegations, Paytm accepted in its blog that Google Play support had contacted the company thrice, i.e. on 20th August, 28th August, and 1st September, with concerns over a separate matter of Paytm First Games’ promotion via Paytm app. However, Paytm stated that it complied with Google’s ask on the matter, despite disagreeing with the policy in general.

Restoration of Paytm on Google Playstore

Hours after being removed from the Google Play store, Paytm founder tweeted that the app is back, live on play store. The app was back on the play store after the Paytm removed the feature of cashback from the recently launched game on the application.

After effects of Paytm Ban: What is the future of online gaming apps?

The fact that Google has taken tough measures on a giant like Paytm, goes on to signify that Google is very serious when it comes to promotion of online gaming and betting through its platform. If Google goes on to apply the same standard, we may see more apps being taken down from the play store.

Industry insiders have stated that fantasy gaming is not out-and-out illegal in the country. In fact one of the pioneers of the fantasy gaming, Dream 11, is the title sponsor of the Indian Premier League[1] (IPL).

The entire “Paytm Ban” saga has brought the focus on the legality of the fantasy gaming in the nation. With the IPL being played currently, a number of fantasy gaming apps would be under the radar of Google and if it doesn’t comply with the policies of Google, then it is just a matter of time before the hammer of law falls on these apps.

Read our article:How You can Also Make Your Wallet Like Paytm?

Owing to the face-off between the Indian and Chinese army over the disputed LAC, the Government...

Legal Analysis of Donation to Polit...

Individual who donate money to an electoral trust and recognized political parties can claim fu...