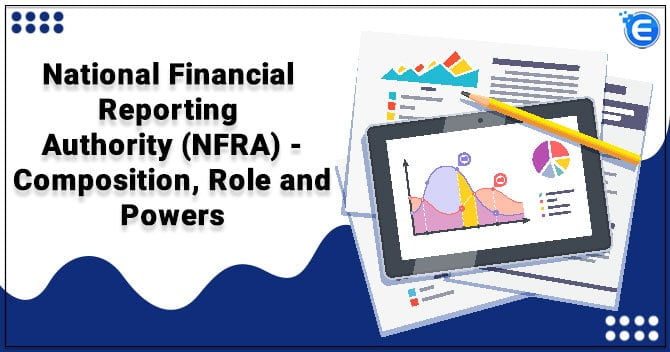 National Financial Reporting Authority is constituted under the provisions of Section 132 of the Companies Act, 2013. The constitution of the authority is effective from October 1, 2018. The need for this authority arose after various scams like PNB and various financial scams. In this article, we shall look at its composition, powers and jurisdiction.

The main objective behind its constitution includes:

What is the Composition of this Authority (NFRA)?

As per the Companies Act, NFRA should have a chairperson who is appointed by the Central Government and a maximum of 15 members. This appointment is subject to the following qualifications:

The draft NFRA rules provides for the following composition of this authority:

It is worth mentioning here that the chairman can invite any other person to the meeting to provide their expert opinion.

This authority has the following responsibilities:

What are the powers of National Financial Reporting Authority (NFRA)?

After discussing its role, now let’s discuss its powers. It has the following powers:

In case a person is not satisfied with the order of the National Financial Reporting Authority, such person can make an appeal to the Appellate Authority.

What are the potential benefits of NFRA?

Jurisdiction of National Financial Reporting Authority for Investigation of CA and their firms under Section 132 would extend to the listed companies and large unlisted public companies. The Central Government may also refer such other entities to investigate where the public interest is involved.

The inherent regulatory role of the ICAI[1] in the Chartered Accountant Act shall continue in respect of its members in general and with respect to audits relating to private limited companies and public unlisted companies below the threshold limit.

The quality review board shall continue quality audit in respect of private limited companies, public unlisted companies lower than the threshold prescribed and also with respect to the audit of companies that may be delegated to the quality review board by the NFRA. Additionally, ICAI shall continue with its advisory role with respect to accounting and auditing standards and policies by giving its recommendations to the NFRA.

ICAI shall continue to have its regulatory powers in specified terms, and the quality review board shall also continue its service. The National Financial Reporting Authority will assist in framing and enforcing legislation relating to accounting and auditing. However, ICAI had some reservations against NFRA as the constitution of NFRA would create two regulatory bodies governing the same audit profession. This may cause duplication of efforts and added huge costs.

Read our article: An In-depth study of Legal Compliance Reporting

An Overview of Forensic Technology...

No matter what business structure is in place, it is critical to have a productive accounts rec...