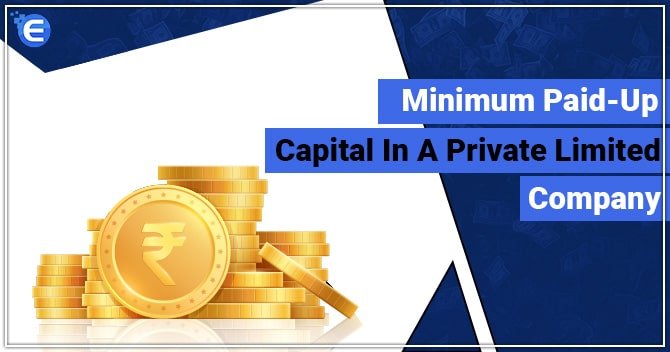 Significance of Paid up capital for Private Limited Company

Classification of capital in a company

The company’s capital may be divided into three types:-

The maximum no. of shares that the Company can issue to its shareholders is known as authorised capital or authorised shares. During the incorporation, the company must specify it’s allowed capital and the importance of AOA in its MOA.

Paid up capital for private limited company, on the contrary, is the portion of authorised capital that specifies the number of shares the company has issued to its shareholders. For instance, the company’s authorised capital (the maximum amount obtained by issuing shares) at the time of incorporation was Rs. 10 lakh, but it has only raised Rs. 7 lakh through its shares so far. As a result, it has a paid up capital of Rs. 7 lakh.

Various sources of Paid up capital for Private Limited Company

The following are the two different sources of paid up capital funding:-

Any Private Limited Company’s primary source of paid up capital is Par value of the shares. The company’s stocks or shares are issued at par value in this scenario. The par value is the stock’s set basic value as stated in the company’s guidelines to changing the MOA after incorporation. The share’s “Nominal value” or “Face value” is another name for it.

In most cases, corporations issue shares at a discount when they are short on cash and need to raise funds quickly. They also issue at a reduced price when a firm is operating at a loss. Companies, on the other hand, issue at a premium value when they are generating profits and there is a huge demand for a limited number of shares.

The minimum paid up capital for Private Limited Company

As a result, we may infer that our notion of massive investments in creating Private Limited is completely false. The government is assisting businesses in developing the economy of the country by waiving large capital requirements. Forming a business as a Private Limited Company allows the company to expand faster and further with the aid of the government.

Read our article:What is Corporate Identification Number (CIN) of a Company?

How to Incorporate Company in the U...

The Act that governs the Principal Corporate Legislation is Companies Act 1985 (amended), and t...

Provisions for Oppression and Misma...

The concept of Oppression and mismanagement helps corporate democracy find its roots. The term...

Our country's economy is agriculturally based, where close to 60 % of people depend on agricult...