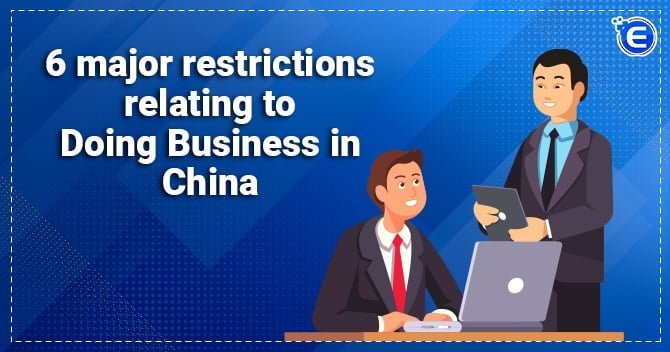 Most of the businesses who wish to get their product manufactured and want to gain access to a greater market, look forward to china because of its manufacturing prowess and population size of $1.4 billion people. This makes it China a very attractive destination for expansion of their business. However, the ease of doing business in China is not a cakewalk, it offers a significant number of restrictions in doing business in China’s domestic market.

This piece of writing gives an overview of the 6 major restrictions faced by foreign investors and promoters in doing business in China.

What are the restrictions related to doing business in China?

Following are the 6 major restrictions in doing business in China:

Counterfeiting is considered as a menace by the foreign companies. Some organisations confirm that global corporations have suffered a loss equivalent to 20 of the global revenue due to the malpractices of counterfeiting and this is as high as in software companies to the tune of 90 percent.

Because of such a weak regulatory framework, China has been put among one of the countries on US Trade Office watch list which targets those countries which do not have adequate intellectual property protection and enforcement and do not offer adequate market access on grounds of IP protection.

Additionally, the law related Intellectual property China recognises the rule of ‘First to file’[1] unlike other jurisdictions where the rule is ‘First to Use’ when it comes to registration of intellectual property rights in China. Therefore, it is recommended that any foreign national company who is contemplating the thought of doing business in China must register their IP rights as early as possible in China before someone else does in China.

Another associated factor restricting doing of business in China is the lack transparency in the government working and the corruption by the state in the quest of the doing business in China.

The practice of protectionism is also very much prevalent in China where their goal is to build their own, domestic, home grown business giants and for this they have restricted access of the global giants from accessing the domestic Chinese market. Global players like Visa, Mastercard, American Express have been barred from entering the Chinese market and instead government and political support has been provided to their domestic giants such as Alipay, Wechat etc. showing signs of protectionism and restrictions from foreign players gaining access to the 1.4 billion strong Chinese market.

China, while offering a business environment in its territory, works with the objective of putting restrictions on doing business in China when the Chinese domestic sector has developed enough capabilities in certain specific areas and makes the business environment favourable in those sectors where it lacks the requisite know-how. By offering attractive business ecosystem, china attracts investment in areas its domestic sector lacks expertise and infrastructure and slowly builds its capabilities in that sector. Once, the Chinese domestic sector has developed the requisite capabilities, it again makes it unfavourable for the foreign investors to make investment in that sector.

Read Our Article: Company Registration Process in China: A Step by Step Guide

Business succession planning and management is a strategy to pass on the leadership roles, whic...

Fundraising – What is the Rig...

As per Microsoft Ventures, Zinnov, NASSCOM Start-up India Report 2015, India is amongst the top...