Liquidator Not To Get Influenced By the Findings of MERC: NCLT 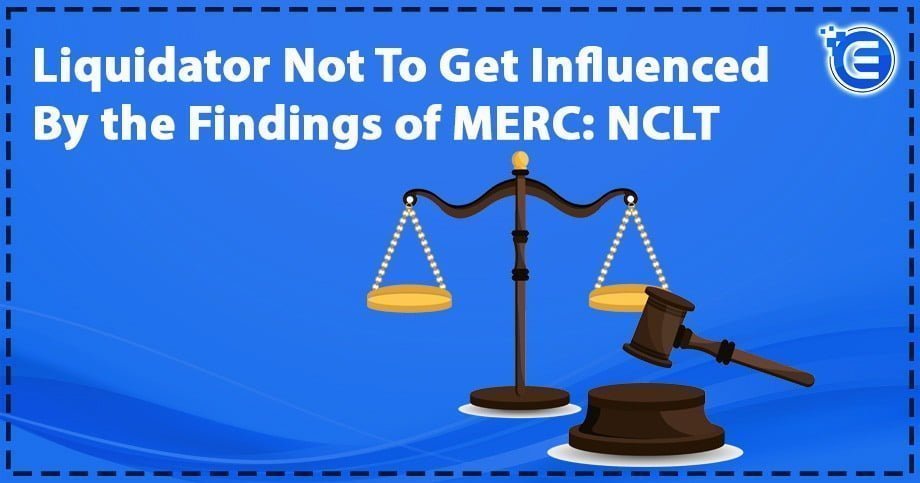 The NCLT Hyderabad Bench in the case of Punjab National Bank v. Lanco Vidarbha Thermal Power Ltd (2022) has rejected the findings of the liquidator while stating that the relevant provisions of the Insolvency & Bankruptcy Code are not properly discussed at the time of rejecting the contentions of the applicant. It was also ordered to the liquidator not to get influenced by the findings of MERC or Maharashtra Electricity Regulatory Commission which is prohibited expressly under the order of adjudicating authority. The present article will discuss in detail the facts of the case, the grounds and submission of both the parties and the decision thereon.

The facts of the case are:

1. The applicant is a MERC or Maharashtra Government Company & a deemed distribution licensee in the State of Maharashtra under Section 13 r/w Section 14 of the Electricity Act 2003[1].

3. As per the agreement, the corporate debtor failed to provide the Fuel Supply Agreements and Environmental Clearance to the applicant in time and also failed to submit the additional bank guarantee.

4. Failure in fulfilling the obligations led the applicant to encash the bank guarantee of Rs 51 Crores and consequently, a claim was made through a letter for compensating the liquidated damages caused to the applicant.

6. Being aggrieved by the non-fulfilment of obligations and non-payment of damages, the applicant filed the case before the MERC, which was held against the applicant.

9. In response to the liquidation order, the respondent called upon the corporate debtor’s creditors to submit their claims. Subsequently, the applicant filed its claim as an operational creditor for the amount of Rs 752.28 crores including interest which was rejected by the liquidator by placing reliance on the order of the MERC.

10. Being aggrieved by the rejection of the liquidator the applicant file an application before the adjudicating authority which has ordered the liquidator not to get influenced by the findings of MERC while deciding the claim.

12. Being aggrieved by the rejection of the claim by the liquidator, the applicant filed the present case before the NCLT Hyderabad.

Submissions of the Appellant

The submissions of the appellant are:

1. The order passed by the respondent is preconceived & pre-determined and is misconceived in law and fact.

2. It is the order of the adjudicating authority for the liquidator not to get influenced by the findings of the MERC. Moreover, wherever the independent analysis of the applicant claim is made, there is a reflection of the arguments purported by the corporate debtor before the MERC. Therefore, the order shall be set aside and the claim of the applicant shall be admitted as a contingent claim which is pending the outcome of the appellate proceedings before the APTEL.

3. The respondent has given an order which is beyond his scope of jurisdiction and overrides the jurisdiction of the APTEL in deciding the case of the applicant on merits.

4. There is no bar in admitting the claim as a contingent claim in the liquidation process of the corporate debtor. It is averred that contingent claims are allowed and have a separate category of claims under CIRP, irrespective of the express provision for the same. Henceforth, the admission and recognition of such a claim cannot be disputed by the respondent merely on the pretext that there are no express provisions under the IBC 2016.

5. The respondent has also accepted the contingent claim of one of the creditors; therefore, this fact cannot be denied by the liquidator.

Submissions of the Respondent

The submission of the respondent is as follows:

1. It is averred that due to pre-occupation, the liquidator is not able to comply with the order of the adjudicating authority and sought an extension of time for verification & determination of the claim submitted by the appellant.

2. It is averred that the appellant’s claim has not been crystallised by any court or tribunal as the claim against the corporate debtor is still pending before adjudicating authority. Therefore, it is not under the liquidator’s powers to adjudicate such claims, which require detailed fact-finding, evidence, and the application of judicial mind.

3. It is contended that the liquidated damages cannot form part of the contingent claim under Section 3(6) of the IBC.

4. It is averred that the respondent has followed the provisions of the code and the liquidation regulations while passing the order.

5. It is denied that the respondent has overstepped his jurisdiction and override the jurisdiction of the APTEL.

6. The order of the adjudicating authority that the liquidator not to get influenced again by the findings of the MERC is not in accordance with the law.

Issue of the case

Whether the order of the liquidator rejecting the claim of the assessee aligns with the directions of the adjudicating authority?

Observations of the Tribunal

It is also further observed by the tribunal that the contentions of the liquidator that “it would not be proper for it to sit over an order passed by the judicial authority “is not only wrong but also contemptuous as the liquidator chose to do an act “liquidator not to get influenced by the findings of the MERC” which is expressly prohibited by the authority under the order.

Decision of the Tribunal


Read Our Article: Voluntary Liquidation of a Company under IBC

The general public still remains unaware of the labour laws that prevail in order to make the w...

Divorce Provisions under Hindu Laws in India The marriages solemnized may suffer a breakdown an...