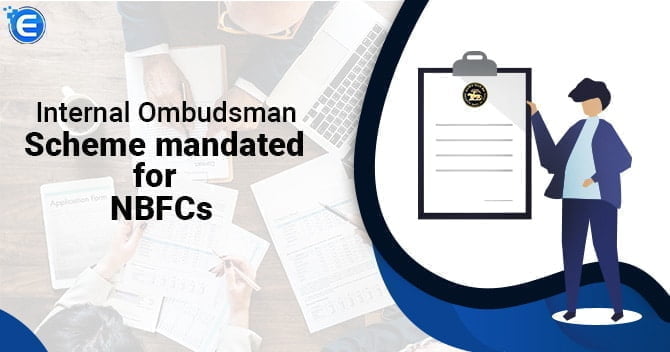 Who is an Ombudsman?

An ombudsman refers to the representative of the people who address their complaints, conduct an investigation and solve disputes through recommendations or through mediations. Ombudsman is derived from the Swedish word ‘ombud’, which means an officer or commissioner.

What is Internal Ombudsman Scheme?

With a view to ensure transparency and consumer friendliness, the RBI introduced this scheme in 2018 for scheduled commercial banks[1]. The ombudsman scheme is complemented by the IO grievance redressal mechanisms that permit the regulated entities with increased freedom to take up consumer grievances on an individual level and fast track dispute resolution process.

Under this scheme, the complaints of the consumers are forwarded to the internal ombudsman, thereby reduces the issue for consumers to file complaint directly. The ombudsman takes up the complaints on the grounds allowed by the RBI and extends resolution through mediation or award. The internal audit mechanism oversees the functioning of the IO with the RBI regulatory framework.

The need for an Internal Ombudsman Scheme

NBFCs role in providing finance to sectors such as MSME, microfinance, housing, vehicle finance has been a crucial one and has effectively complemented the efforts of the banks through the last mile financial intermediation. The Central Bank further observed that various NBFCs have successfully adopted digital modes to support delivery of financial products and services to wide customer base.

The RBI said that the need for Internal Ombudsman Scheme arose considering the increased significance, strength and reach of NBFCs in the country. Therefore there was a need to have better customer experience, including grievance redressal practices.

In the last few years, the Reserve Bank has introduced various measures towards consumer protection and grievance redressal of customers of NBFCs which includes requiring from NBFCs to appoint Nodal officers for grievance redressal and the launch of the 2018 Ombudsman scheme for NBFCs.

The RBI stated that the Internal Ombudsman scheme for NBFCs will be on the lines of IOS for banks and non-bank payments system participants. It will require from some NBFCs to appoint an Internal Ombudsman at the top of their internal grievance redress mechanism to examine complaints from the customers that are in the nature of deficiency in service and is either partly or wholly rejected by the Non-Banking Financial Companies.

If we refer to the Clause 8 of the Ombudsman Scheme for NBFCs 2018, the NBFC ombudsman receives and considers the following types of complaints:

So, to sum up, the RBI will introduce the Internal Ombudsman Scheme for NBFCs with higher customer interface. The RBI further said in a statement that detailed instructions in this regard will be issued separately.

The Opening of Current Accounts by...

The system of Current Account opening in India has been under the ambit of the Reserve Bank of...

RBI guidelines for Amalgamation of...

The Reserve Bank released a notification on May 24, 2021, stating that it would consider amalga...

The Reserve Bank made an announcement recently on a nationwide framework for implementation of...