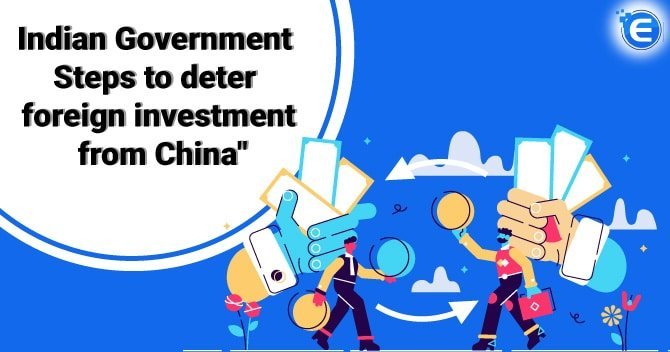 Amidst the Covid-19 pandemic, the Government of India has brought out different forms of measures to deter foreign investment from China. One such move by the Indian government to deter foreign investment from China is the introduction of a major amendment (Press Note 3(2020) Series) on April 17, 2020. This press note states the amendment of the foreign investment policy by neighbouring countries that share land borders with the Indian Subcontinent. This press note was brought out by the Department for Promotion of Industrial and Internal Trade (DPIIT) and the Government of India.

Some of the significant changes which will be caused pursuant to the introduction of the amendment are:

The liberalisation of Reforms 1991

Until the year 1990, there were stringent policies and laws which regulated companies present in India.  Due to the financial crisis, the government took immediate action to create a scenario of liberalisation. This was under the leadership of PV Narasimha Rao and the Finance Minister Manmohan Singh in 1990.

The following effects were brought out as a result of economic liberalisation in the country:

Efforts taken by the Government to amend FDI in 2011

Under the leadership of the UPA Congress, the Indian market was suited to attract more investment in the retail sector. As a result of this initiative, the government changed the regulation and allowed Foreign Direct Investment in the retail sector. This investment was classified as FDI under the automatic route. Due to pressure from the opposition, this move was not allowed. However, in 2012 this move was approved.

Why Deter Foreign Investment from China?

Research indicates that there is a direct correlation between the amount of FDI earned by a country and the Gross Domestic Product (GDP). Due to this, the government has to consider initiatives to improve the amount of foreign direct investment in the country. However, the government in the post-COVID-19 environment has brought out such amendments to deter foreign investments. What is the reason behind this move?

Before going in detail, it is important to understand the difference between the terms Automatic Approval and Government Approval under the foreign direct investment regime.

What are the measures taken by the Government of India to Deter Foreign Investment from China?

The following measures have been taken by the government of India to deter foreign investment from China:

1) Sharing Land Borders? What does it mean as per amendment?

The following countries were affected:

What was the reaction for this FDI amendment to deter foreign investment?

Entities which were set up in countries that share land borders with India would be affected.  However, as the press note was introduced without any form of clarity, there were a lot of doubts in the minds of investors, investees, and another form of companies. Western economies have also taken such steps to deter foreign investment from China.

Investors were confused regarding what investment would be allowed and which would not be allowed as a result of this amendment. When introducing the amendment in April 2020, there was no form of clarifications which were provided by the government of India regarding the same.

Investment in the form of securities would not be affected as a result of this amendment. However, what would happen to investments which have already been gone for Approval? What would be the situation for contracts and agreements between different forms of parties? There are a lot of unintended consequences of such an amendment.

In the eyes of the law, there has been meaning provided for beneficial ownership under the Companies Act, 2013. Under section 90(1) of the Companies Act, 2013, a beneficial owner is understood as an entity or an individual who owns some form of a major stake in the company. The percentage of ownership is significant.  It can be understood as every individual or any other individual who acts on behalf of others who ahs the following:

The meaning of a beneficial owner has also been depicted under the Companies (Significant beneficial Owners) Rules, 2018. Under the definition of the beneficial owner, any form of entity which includes the partnership concern and a company is included.

Though the government has taken steps to deter foreign investment from China, these questions are left unanswered. However, as per the Indian legislation, normally entities and companies that consider the meaning of beneficial owner have 10% to 25% vested interest for the entity or the individual to be called a beneficial owner.

Hence, the definition of a beneficial owner helps us understand and interpret the amendment carried out by the government of India.  Even though this has been interpreted what would happen to companies that are operating in the private equity space? What would happen to Chinese Listed entities that already have some form of interest in an Indian company? What would happen to the thriving start-up sector which has different form of investments from China? All these questions are left unanswered until further clarity is provided.

What is the reaction for beneficial ownership?

There has been a mixed reaction by different form of individuals as well as stakeholders related to the principle of beneficial ownership. Affected individuals include a variety of law firms, consulting companies, investors, and investees in China and India. Until certainty is provided regarding the meaning of beneficial ownership, stakeholder’s doubts will be left unsolved.

Present investments that have already gone through will not be affected. However, if a country sharing land borders with India has some form of present or future change in beneficial ownership, then government approval would be required. This would mean to say if a Chinese company has an investment in an Indian entity and if they become a beneficial owner, will they have to take Approval from the government? The government of India to deter foreign investments from China must have provided clarity on the same issue.

What would happen if an investor is present in Hong Kong and invests indirectly through China? Will such an investment be allowed?

To understand this, we have to consider the amendment. The amendment would only apply to countries that share land borders with India. Hong Kong is a Special Administrative Region and is a territory which is different from China. Being one of the largest financial centres in the world, if an investment comes from Hong Kong but is sourced through China, then such investment would require some form of government approval.

Going by the above, it can be said that the government has taken steps to successfully deter foreign investment from China. However, it will also cause regulatory issues for other countries which share borders with India. Countries that have proper relationships with India, such as Bhutan would also be affected by this regulation.

Due to the recent disturbances in the Line of Actual Control (LAC), the Government of India has taken steps to ban certain Chinese applications, including big names such as Tik Tok. Till now more than 224 applications have been banned in India.

This ban is caused due to several reasons; however, the MeitY[1] has quote cybersecurity and other forms of threats as one of the main reasons to ban such applications. Data theft and the breach is one of the main reasons why these applications are banned.  Data of users have been taken without their permission and transmitted outside India. Quoting this as a security concern for more than 200 million Indians, the government of India has taken this drastic step of banning such applications.

Through these measures, the government of India has successfully taken proactive steps to deter foreign investment from China. Though this action taken by the Indian government has affected other countries still, FDI inflow would not be affected drastically.

As per current statistics, the amount of FDI inflow in the year is as follows:

From the above statistics, the influx of FDI in India has indeed reduced due to the devastating effects of the Covid-19 pandemic. However, USD 22 billion has come in 2020 only through the automatic route. Hence even if the government of India has taken steps to deter foreign investment from China, it would not have affected the Indian economy to such an extent. India is a diverse country and can depend on self-regulation and development.

Read our article:Banning Chinese Applications: A National Move by the Indian Government

An Overseas Direct Investment relates with respect to the investments made in the Joint Venture...

Issuance of Convertible Notes in In...

The Government of India had announced the Consolidated FDI Policy during FY 2017-18. The main m...

What are the types of Foreign Direc...

FDI or Foreign Direct Investments is one of the most vital sources of direct investments in cou...