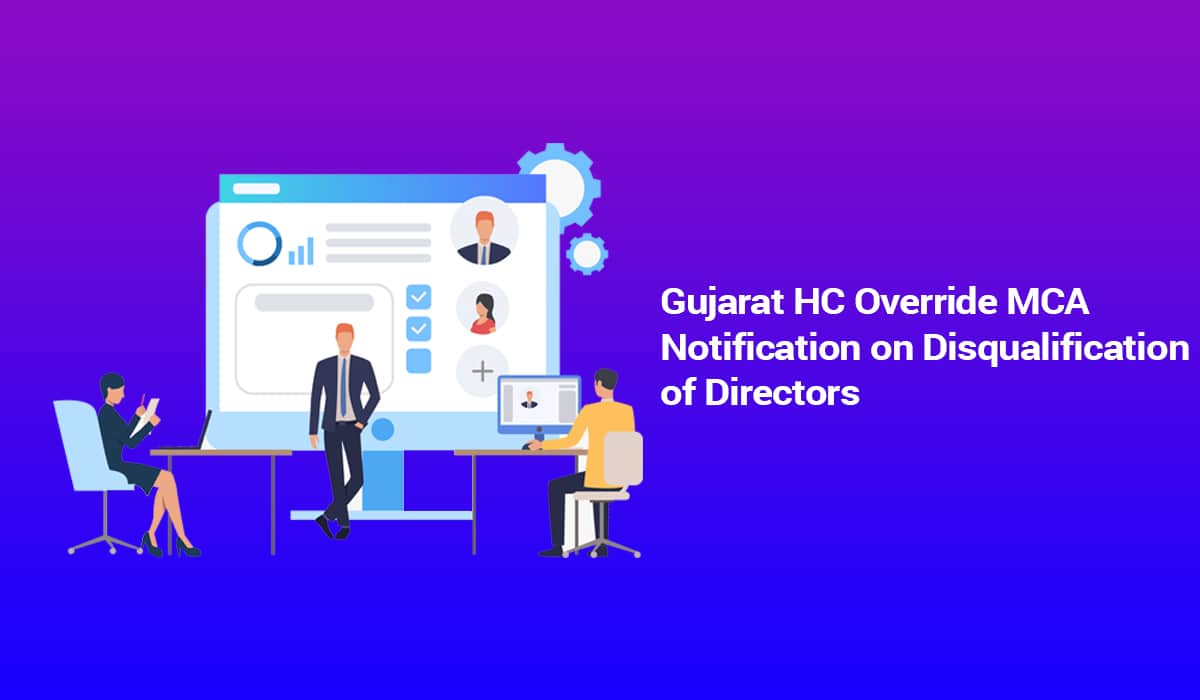 MCA has come up with various notifications in the month of September 2017, that disqualification of directors was wrong and amounted to give retrospective effect to the provisions of Section 164(2) of the Companies Act 2013. Further MCA has struck off companies by naming them as ‘Shell Companies’ and as a result disqualified their directors, which extended to private companies as well.

Ruling of Gujarat High Court on Disqualification of Directors

In case of “Gaurang Balvant Lal Shah vs Union of India” the Gujarat High Court observed that “Section 164(2) of the Companies Act of 2013, which had come into force from 1.1.2014 would have the prospective effect, not retrospective.

In the respective case, more than 20 applications were clubbed together, as the court opined that the basic challenge was similar in all the application. All petitioners were disqualified by the MCA for being associated with the struck off companies and their DINs were deactivated. (CODS) Condonation of Delay Scheme 2018 were introduced to such defaulting companies except struck off companies under section 248(2) for a period of 3 months subject to the NCLT order under section 252 on the applications seeking.

Types of Disqualification of Director

Disqualification of Director can be-

The director will be disqualified for the respective period; this also results in a vacation of Office under section 167.

All directors holding the position of directors will be disqualified for 5 years and results in a vacation of office under section 167.

Provisions Regarding Disqualification of Directors

Section 164 deals with disqualification for the appointment of director. A person shall not be eligible to appoint as a director if he is –

In case of Private Company – In addition to the above, if the article of association provides, a person can be disqualified as director. On the other hand if its Article does not provide then grounds mentioned under section 164 shall be applied for disqualification of the director.

The DIN of the directors was deactivated; the judge further points out that striking off a company shall not lead to instant deactivation of DIN. Further, Rule 11 Of Companies (Appointment of Directors) Rules, 2014 – states the circumstances under which DIN may be deactivated. The reasons for the deactivation of DIN are as follows –

Vacation of Office of Director – Section 167

Section 167 co-relates itself with the criteria of disqualification of directors provided under section 164(2) of the Act, 2013. As per the Companies (Amendment) Act, 2017 one of the criteria is incurring disqualification under Section 164(2), except the defaulting company a vacation of office of the director must be made from all other companies. It complies with the condition where the office of the directors become vacant. i.e.

Section 92 provision provides that a copy of the annual return in e-Form MGT-7. Within a time period of 60 days from the date of the Annual General Meeting or the date when it should have been held, should be filed with the Registrar of Companies

Section 137 deals in filing a financial statement in e-form-AOC-4 within a time period of 30 days from the date of AGM or the date when the AGM should have been held, should be filed with the Registrar of Companies.

Fee for filing under section 92 and 137- Additional fee for filing the return and financial payment beyond the time prescribed is required to be filed.

Where the company commits any default in filing the return and financial statement to registrar of the companies, the company and its directors who are responsible for such default will be held liable for the penalty or punishment for such failure.

Fee for filing under section 92 and 137-Additional fee for filing the return and financial payment beyond the time prescribed is required to be filed.

Dharampal Sathyapal Limited V. Deputy Commissioner Of Central Excise And Other And Maneka Gandhi V. Union Of India – In the given case the Supreme Court is of the view that disqualifying the directors without even providing them an opportunity of being heard is absolute unreasonable and the principle of natural justice should be followed.

Bhagwan Das Dhananjaya Das against Union of India and RoC, Tamilnadu Govind Das V. Income Tax Officer and Others – In the given case the Supreme Court is of the view that disqualifying the directors without even providing them an opportunity of being heard is absolute unreasonable and the principle of natural justice should be followed.

As per the judgment of Gujarat High Court it was not legally tenable deactivating the DIN of the petitioner (Directors). The court has considered that section 164(2) would have prospective effect and not retrospective. The ruling was made to provide relief to the directors who have been disqualified by the MCA. Based on the MCA notification by the Gujarat High Court, companies are free to appoint the individual, if they can restore their DIN.

We often witnessed these policies in our day to day routines like whenever we install any app o...

A website can be understood as a collection of publicly available information which is present...