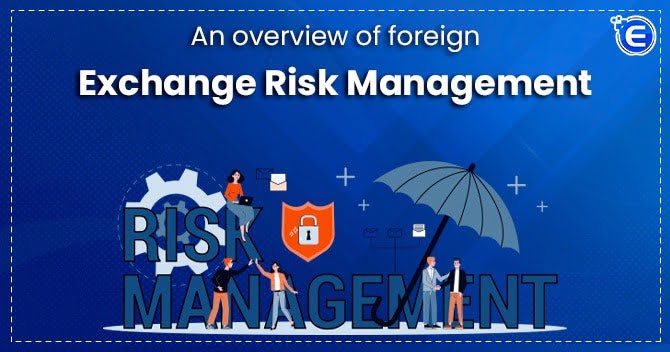 What Is Meant By Foreign Exchange Risk Management Strategy?

Foreign Exchange Risk Management is the strategy or a programme listing down a set of procedures to be employed by a company to achieve its goals of managing currency risk. The strategy or programme is dependent on the business specifics of the company, its pricing parameters, and the location of its competitors and the weightage of foreign exchange in the company’s business. Certain other factors included in the strategy are the sources of information, degree of cash flow visibility, IT infrastructure and decisions taken by the key managerial personnel of the company.

What Are The Different Techniques Of Foreign Exchange Risk Management?

Following are some of the most commonly used foreign exchange risk management techniques by the companies:

Another similar technique employed for foreign exchange risk management is the technique of Netting where the inter-affiliate indebtedness among the group companies is set-off while trading with each other. In other words, the inflows and outflows among different entities of a same group is set-off using the same foreign currency. It is further sub-divided into bilateral netting where a pair of entities are involved and another technique of multi-lateral netting where more than two entities are involved of the same group of companies.

In this technique, payments in forex are made either earlier or delayed to the trading partners or foreign subsidiaries in such foreign currencies whose values are expected to appreciate or depreciate. This type of delayed or accelerated payments is made within the confines of the terms of the trading contracts or in accordance with the prevalent trading practices and also in consonance with the existing applicable regulations.

Leading means making the payment in advance of the due date and lagging means delay in the making of payments beyond the due date. Leading lagging refers to the credit terms and payments between the associate companies of a same group of companies. Such an arrangement is decided in order to benefit from the expected rise and fall in the exchange rates.

For example: Company A is a subsidiary of company B located in India. Company A needs to make payment to another subsidiary of company C situated in USA for the amount company A owes to company C. The payment is due within 3 months’ time and it is expected that the value of Indian rupee is set to rise by 20%. Then in such a case the company A will choose to make payment in Rupees and delay the payment as then it will have help in saving more units of Indian Rupees. Converse case is with leading. However, it is advised that before adopting this technique, other factors such as relative interest rates, expected currency fluctuations, tax implications are taken into account in order to avoid potential loss.

The type of technique involves a dilemma faced by both the exporters and importers in deciding a particular currency in which the payments will be made. The seller always wants to make the payments in his domestic currency or that currency in which he incurs cost. The reason is the seller wants to avoid foreign currency exposure. However, in case of a buyer’s market, the seller does not have much of a choice of his desired currency. In such situations, the seller must choose only major currencies in which the foreign markets are pretty active. Conversely, payment in those currencies must be avoided that are of limited convertibility and have a weak forward market.

In this technique, the selling prices of the products are increased in order to counter the exchange rate fluctuations. The question then arises is whether the company has the capacity to increase its prices in tandem with the fluctuations in the exchange rates. A company can achieve such a feat if that company is a market leader. For example, in the case of South American countries, the only option left with South American companies is to increase the prices as a means of foreign exchange risk management.

A tactic usually employed by the companies is that of transfer pricing among the subsidiaries of the same company as a means of foreign exchange risk management tool. Such companies must be aware to maintain the arm’s length price or else the company can come under the radar of taxation and customs authorities. Nevertheless, this is a practice that has been adopted by the multinational companies across the globe to make the maximum out of the tax group cash flows by transfer pricing in order to minimize tax liability and move funds around the world.

Management of Assets and Liabilities

In this technique of foreign exchange risk management, the companies try to manage their income statement, balance sheet or cash flow exposures by shifting the cash inflows into currencies expected to be strong or increase exposed cash outflows denominated in weak currencies. The modus operandi in such cases is that companies try to increase their exposure under debts, cash flows and receivables in strong currencies and increase borrowings in currencies that are weak. At the same time, such companies reduce exposed borrowings and trade creditors in strong currencies.

A company can adopt a more conservative approach of matching the cash inflows and cash outflows according to the currency denomination irrespective of the fact whether such currencies are strong or weak.

Under forward contracts, one party is obligated to buy the underlying at a fixed price at a particular time in the future and counter party is obligated to sell the underlying at that fixed price in the future. This is one of the most commonly used tactics in the forex market. For example, an exporter in India wants to export a consignment worth $1 million and expects to receive the payment within six months. The existing price of the dollar is for example INR 75. If the price of the dollar falls by about 10 percent by the end of six months, then the exporter will suffer a loss of around 75 lakhs. In order to protect itself, the exporter can sell dollars forward and locks in the current forward rate of INR 75 per dollar. This way the exporter has fully protected itself or hedged itself i.e. he has taken a financial position to reduce the exposure from fluctuation in exchange rates[1].

Under futures contract, there is an agreement to buy and sell a standard quantity of a specific financial instrument at a future date and at a price that is agreed between the parties at a financial futures exchange. It trades on the future exchange and is subject to a daily settlement procedure to guarantee each party that claims against the other party will be paid.

The technique of hedging through Options is different from that of hedging through forwards and futures contracts. Here in hedging through options, the buyer participates in the good side of the risk and insures itself from the bad side of the risk. There is only a right sans any obligation to perform. Therefore, an importer who has purchased a call option will have a right to buy the underlying, even if the current spot price is par above the price under option. In another situation, where spot price is less than the option price, then the option holder has the right to ignore the option and acquire dollars from the spot market.

Options are useful especially in cases of uncertain cash flows. For example an Indian company makes a bid for a tender in a foreign country. The forex flows of the company will materialise if the company is able to secure a bid for itself. Similarly, if an Indian investor makes a invests in a foreign stock market thinking that due to falling dollar price his portfolio value may also decline. In all such cases where cash flows are contingent upon happening of a particular event, it is advisable that all such events be hedged through options.

In this technique, there is a contract to exchange cash flows over the life of the contract. It is a transaction where two parties decide for an exchange of payment over a period of time i.e. till the life of the contract. Currency swaps are usually marked by the exchange of principal amount which can be either actual or notional in nature. In such an agreement, the counter-parties exchange the principal amount in different currencies at an exchange rate which is usually the existing spot rate and then reverse the exchange at a later date usually at the same exchange rate.

It must be noted that such swaps may involve currencies or exchange rates also. It allows the corporate treasurer to manage his portfolio of liabilities. It also allows arbitrage on market imperfections and help in raising finance at lower rates than market rates.

The technique of money market hedging becomes beneficial in cases where companies want to raise medium term loan in foreign currency. Such companies can consider the option of reducing currency risk by raising the loans in currencies which the companies have medium term exposure in terms of receivables and assets in these currencies. Such companies need to have access to the international money markets or European money markets for short term borrowings or investments where the forward premiums and interest rates are very low. For example, an Indian exporter is having a receivable which is due for payment in the next three months. If that Indian customer has access to the International market, then he can take a loan in dollars against such a receivable amount and convert the same into INR at the current spot rate. The loan taken can be used to for making domestic payments or for lending in the domestic market. Subsequently, the amount due under the export bill can be used to pay off the European loan. This kind of arrangement can be beneficial particularly at a time when the differences in the interest rates or the forward premiums or high.

A number of techniques have been listed in the above discussion. It is not necessary for a company to follow a single technique or all the techniques. The company can chose a set of techniques depending on the nature of its business and accordingly develop a foreign exchange risk management strategy.

Read Our Article: The Significance of Foreign Exchange Market

Everything You Need to Know About B...

In spite of the relative stability in the global economy, Businesses are facing a series of sub...

Rise in Payment Frauds: Is there a...

There has been a definite shift in the way people bank and transact. Especially since the Covid...

An Insight Into Value Chain Managem...