Dues of MSMEs: Ministry of MSME takes efforts to realize these payments 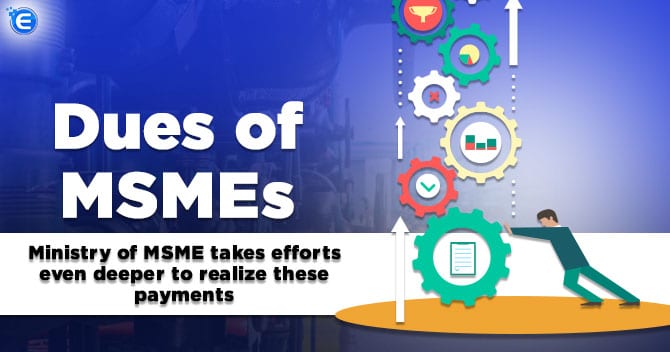 The online system of reporting by the Ministry of MSME

When the Atmanirbhar Bharat package was announced, it was desired that MSME receivables and dues should be paid in 45 days time. Accordingly, the ministry of MSME took the matter aggressively with Central ministries and their departments and Central Public Sector Enterprises[1].

In addition to writing and following up with them, the ministry has devised the online system for reporting purposes. Hundreds of Central Public Sector Enterprises have been reporting on this system about the monthly dues and payments for the last four months. Around 10000 crore rupees have been reported to have been paid by the ministries and Central Public Sector Enterprises. Similarly, the ministry has taken up the issue with states and motivated them to monitor and see that such payments are made expeditiously.

Efforts by the Ministry of MSME

Taking the efforts to the next level, the Ministry has taken up the issue directly with top 500 corporate groups of the country. The Ministry has also written e-letters to the owners, CMDs, or top executives of these 500 corporates. In conveying its support and solidarity in these tough times, the ministry has taken up the issue strongly of pending payments of Micro, Small, and Medium Enterprises.

It has stated that many MSMEs are doing business with big corporate groups. However, the payments are not coming from the buyers and users of their goods and services.

The Ministry has said that the direct and indirect dependence of households, professionals, and workers on the MSME sector is all-pervasive. The ministry further added that a lot remains to be done while thanking those who made Payments in recent months.

Suggestions given by the Ministry

In order to tackle the situation, the Ministry has given three specific suggestions to the corporate world. These suggestions include the following:

In appealing to corporate India for their good gesture towards smaller units, the Ministry of MSME has reminded them of the legal provisions under the MSME Development Act of 2006, which mandates that the payment of the MSME receivables is made within 45 days. The Ministry has also stated that this would be a significant contribution to the economy of the nation. The Ministry also feels these payments would bring smile on millions of faces whose source of livelihood is the enterprises in the MSME sector.

The Ministry of MSME has also indicated that it will be taking up the matter with other corporates going forward through social media outreach as well.

Loan Restructuring – Due to C...

The Reserve Bank of India announced, in its statement on developmental and regulatory policies,...

In the year 2018, to give a boost to the Small and Medium Enterprise (MSMEs), the Indian govern...

Steps to protect MSMEs from getting...

Micro, small and medium enterprises have a special place in the Indian economy as it is the key...