Definition of Factory under Factories Act 1948 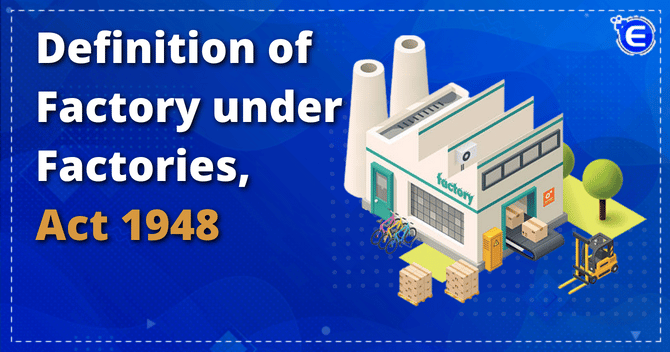 Every individual or entity engaged in the manufacturing process must set up a factory to carry out such process together with adhering to the Factory Compliance prescribed by the Factories Act 1948 to avoid any penalties in respect of the same. Most industries suffer from punitive actions consequential to non-compliance under the concerned legislations due to the lack of clarity about their establishment falling under the ambit of “factory” under the said Act. This article discusses the Definition of a Factory under Factories Act 1948[1]  to provide clarity about the essential elements of a factory as per the statute and help to avoid any confusion in this regard.

What is the definition of Factories under the Factories Act?

As per section 2(m) of the Factories Act 1948, a factory can be defined as premises or precincts-

(i) Plantation of fruits, flowers or vegetables in a shed-net house or greenhouse

Exclusions from the definition of Factory under Factories Act 1948

The following are not included in the definition of Factory

Special Provisions regarding the Definition of Factory under Factories Act 1948

The section states that the State Government has the power to declare through a notification in the official gazette about the provisions of this Act being applicable to any premises where the manufacturing process is being carried out, provided that:

After such declaration, the said premises will be deemed as a factory, its owner as the occupier and any person working therein as a worker.

According to this section, “Owner” shall include a mortgagee or lesser having possession of the premises.

The Apex Court held that the word “premises” is a generic term that means an open land or any land with buildings or buildings alone. The expression “premises including precincts” doesn’t necessarily mean that premises must always have precincts. Even buildings need not give any precincts. The word ‘including’; is not restricted to the word “premises” but enlarges its scope. The use of the word including does not indicate that the worked “premises” must be restricted to the main building and not be taken to cover open land. However, some provisions of the Act do not apply to salt works that include the conversion of seawater into salt in the open. Nothing in the Act makes it uniformly compulsory for every factory occupier to comply with every requirement of the Act. An occupier must comply with such provisions of the Act, which apply to the Factory he is working in. Therefore, salt works fall within the meaning of the word “premises” used in the definition in Section 2(m). Salt works thus are covered under the ambit of word Premises

This case discussed the conditions that must be fulfilled for premises to be considered a factory under Factories Act 1948. The conditions for the same are-

(b) The establishment where the manufacturing process is being carried on with the aid of power, a minimum of 10 workers must work in such establishment. If the process is being carried on without the aid of power, then the no. of workers should be at least 20. Only the use of power on the premises is insufficient, but power must also be used to aid the manufacturing process.

Another essential pre-requirement for any premises to be considered a ‘factory’ is that a “manufacturing process” should be conducted within the premises.

Section 2(k) of the Factories Act, 1948, defines the manufacturing process as the process to

(i) Make, alter, repair, oil, wash, clean, ornament, finish, pack, break up, or otherwise treat or adapt any article or substance with regards to the use, sale, transport, delivery or disposal, or

(ii) Pump oil, water, sewage or any other substance

(iv) Compose types for printing the letterpress, lithography, photogravure, or other similar process or book binding

(vi) Preserve or store any articles in cold storage

India is a country possessing an immense capacity for businesses and individuals to prosper. Therefore, aspiring business owners must understand the terminology and essential definitions that may affect their business. As an entrepreneur, it is important to know the right definition of a factory in order to ensure that all the mandated norms are met, and the business follows compliance set by the authorities concerned.

Read our Article: All about the Factories Act, 1948 in India

Duties of Occupier under Factories...

The Factories Act 1948 was enforced on 1st April 1949 with the objective of regulating the work...

Duties of Safety Officer under Fact...

The safety of the workers of the factory is one of the most crucial aspects of the Factories Ac...