Can A Government Company be Subjected to Insolvency under IBC? 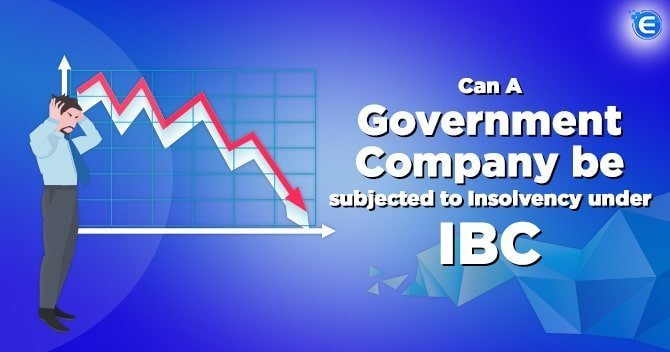 In the recent (landmark) judgment delivered by NCLT Mumbai in the case of Harsh Pinge Vs Hindustan Antibiotics Limited, the main question which arose was whether a Government Company is subject to insolvency under IBC. Firstly, the main issue which arose before NCLT was whether Corporate Insolvency Resolution Process (CIRP) can be initiated against Govt. Companies which indeed is nothing but a government instrument under Article 12 of the Constitution of India. Secondly, if IBC is the ultimate solution for the petitioners or if any written admission from the side of the petitioner is capable of serving any purpose of IBC? Thirdly, Whether the preamble of the Constitution of India which includes the word “socialistic” has any bearing on this petition and lastly if the admission of a petition defeats the public purpose.

In coming to the conclusion on points (i) and (ii), the learned Bench opined as follows:

In view of the findings, it was considered that the CIRP process could not be initiated against an instrumentality of the state. There was an attempt made to lift the corporate veil of the Corporate Debtor to see who is behind the same and it was found that it is none other than Government of India, in the name of President. Initiating CIRP process against the Corporate Debtor equally amounts to initiating CIRP process against the government, which is not permissible under the Constitutional Law. The lawmakers, while enacting the IBC this situation was not envisaged; otherwise, it would have exempted government company from the CIRP process. The application of the Code on the Government Companies defeats the intent for which IBC is taken into existence. However, there is also another way to look at it and that is, there is no reason even to expressly exempt the Government company because it is an instrumentality of the state and has the corporate character and independent entity. Rather it can be said that there an alter ego of the state itself and the result of same is that the IBC cannot interfere with the state-owned undertakings.”

Through the above judgment thoroughly, we might come across certain salient features which are as follows:

In respect to issues (iii) and (iv), the conclusions are as below:

By above context it can be said that irrespective of any circumstances or fact whether a government company is earning profits or not and has the capability to pay its debts or not, the survival of the government company cannot be put in harm. Here is a case where merely because an employee who served the company for several years, who gave a lot to this company and had grown from the bottom to the top level will not winding up his long association with the Company. The question arises is there any Debt and Default if made by the company then can CIRP be initiated against a Government Company? The answer has to be no. The reason for the same was that the Government Company though incorporated as a corporate entity but is not wholly created for the intent of making money or to earn profits by creating huge facilities. The real object of these companies is to serve the public purpose even at the cost of incurring losses. The Government Company is under the control of the Indian government which takes an appropriate call at the time when it requires and would make all the possible efforts to revive the Company, rectify all its losses and previous dues and pay dues to all its employees. Therefore, the admission of petition would defeat the provisions of the Constitution of India. The Constitution of India and its preamble overshadows and prevail over the provisions of IBC and thus the Petition thoroughly fails on the above-said ground.

In view of the above, point no. (iii) and (iv) are against the Petitioner and in favour of the Respondent as it is a Government Undertaking. The initiating of the insolvency process against it would be against public interest and also against the provisions of Law. Another important point is observed from another angle of several important Government Companies such as Bharat dynamics Limited, Hindustan Aeronautics Limited, Bharat Heavy Electricals Limited, and Bharat Electronics Limited. It was noted that if at all in any circumstances a petition under IBC is allowed to be maintained against any of these government Companies, then there might be chances that very sensitive data or information would be leaked out and the same would create chaos. This would defeat the very confidentiality of the company. Therefore, we can draw the conclusion that the constitutional law doesn’t permit any Insolvency Petition being maintained against a Government Undertaking.”

After going through the NCLT’s order we can clearly say that its order very gracefully covered all the major issues. The Government Company is under the state and therefore technically the same cannot go under the IBC process. The state will not interfere with the state-owned undertakings or Government Company. In view of the above, the point is answered against the Petitioner as the Petitioner can have an alternate effective remedy in a civil court or also by way of proceedings made under Article 32 or 226 of the Constitution of India in an appropriate forum if so required.

We shall look into Section 2 IBC the, provisions where this act is applicable. The provisions of the code are applicable to Companies act, 2013 or any other company which is governed by any special act. Or any limited liability partnership incorporated under the Limited Liability Partnership Act, 2008 or such other body incorporated under any other law for the time being in force.

Other important provisions of IBC:

Section 3(7) defines “corporate person” means a company which is defined in clause (20) of section 2 of the Companies Act, 2013, or

Limited liability partnership, which is defined in clause (n) of sub-section (1) of section 2 of the Limited Liability Partnership Act, 2008 or

Any other person incorporated with limited liability under any law for the time being in force but must not include any financial service provider.

Section 3(8) Corporate Debtor- It talks about any corporate person who owes a debt to any person.

Section 2(20) defines Company which means any company incorporated under the Act or any other previous company Law.

Analyze whether Government Company is an instrumentality of State?

The Concept of State is given according to Article 12 of the Constitution of India. It is a body politic, or society when united together for the purpose of promoting their mutual safety and advantage, by their joint efforts of their combined strength. Individuals need constitutional protection from the various acts of the state. Fundamental rights are a kind of protection available against the state only as ordinary laws which are sufficient enough to protect infringement of rights by the individuals. Along with great powers comes a greater risk of abuse further in order to safeguard rights and freedom of the individuals.

In this Part unless the context otherwise require State includes:

In Virendra Kumar Srivastava v. U.P. Rajya Karmachari Kalyan Nigam and Anr. AIR 2005 SC 411, Supreme Court held that in context to examine whether an authority is a State or not within the meaning of Article 12 of the Constitution, the court has to carry out in depth examination of who has administrative, financial and functional control of such a company, and then analyze whether the State in such a case is only a regulatory authority, or if it has deep control over such a company. Also examine whether such company is being receiving full financial support from the government or whether administrative control over it, has been retained by State and the authorities. It is also checked whether it is supervised, controlled and watched over by various authorities of the State, even with respect to its day-today functioning. Then only such company and corporation can be held to be an instrumentality of the State under Article 12 of the Constitution

There are three main aspects of Article 12 which require to be particularly noticed. These aspects are as following

(iii) Further, it is inserted in the Constitution for the reasons of Parts III and IV thereof and no other purpose whatsoever.

The State, on certain occasions, has either tried treating Financially Sick Companies bringing them to a stable situation aiding them financially or made sure that dues of all its Creditors are duly paid with no dues either to its employees or other creditors. In a State like India, allowing Insolvency proceedings against any Government Agencies of the State is like proceedings against the state itself and it will be set out a wrong precedent in the Indian Scenario and won’t set a good example for other functional Government sectors. Under the above pretext, it is stated that CIRP cannot be initiated against the Government undertakings.

Sale of Going Concern under IBC...

The sale of going concern means selling on “as is where is basis” wherein the liquidator se...

Insolvency and Bankruptcy Law and i...

The insolvency and bankruptcy law is essential to an economy. These laws help in reorganization...