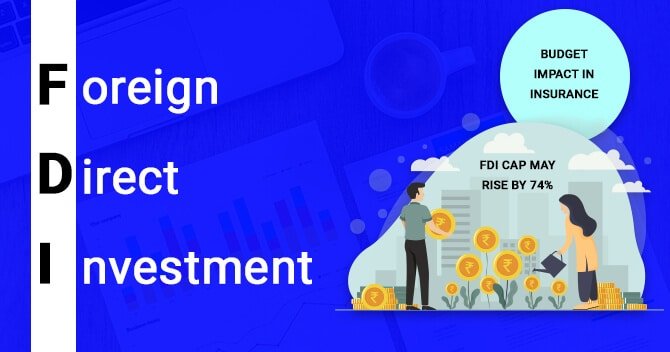 In the Budget 2019-20 Finance Minister Niramala Sitharaman had announced that the government would “examine suggestions of further opening up of FDI” in a number of sectors, including insurance, along with 100% FDI in insurance intermediaries. At present, the stake of FDI is 49 Percent. The proposal by the Finance Ministry was to raise the cap to 100 percent. The finance ministry along with the Insurance Regulatory and Development Authority of India (IRDAI) agreed with the proposal of 74 percent. Views of stakeholders on this matter in a letter on 2nd December has called for suggestions on raising Foreign Direct Investment Limit (FDI) by 74%. In July budget, Finance Minister Niramala Sitharaman announced that the Government will examine suggestions from various stakeholders to further open up FDI in Insurance Sector.

“The move will bring in cost-effective capital for several insurers who are investing in technology and digital solutions, and who are wanting to expand the network to grow and make multi-fold impact towards building a long term and sustainable insurance sector,” said Ashish Vohra, ED & CEO, Reliance Nippon Life Insurance.

‘It is a progressive move as currently the burden of crop insurance is largely on GIC. With this move, niche players with a good understanding of the market and international players looking to purchase diversified global pools may enter the market which will lead to better risk-based price discoveries,” said Ashwin Parekh managing partner at Ashwin Parekh Advisory Services.

The government is seriously contemplating opening up the sector as it wants long-term stable money to be invested in the country. IRDAI is seeking inputs from industry people on government instructions and a report is expected to be submitted soon,” said a person involved in the discussions. “If all goes well, the government is planning to introduce this as part of the budget announcement and take a shortcut so that it gets Parliament’s nod as part of the Finance Bill.”

“The experience with foreign banks has been very mediocre as they have unwound business in India after their global operations took a hit,” said one of the persons cited above. “And, since insurance, especially life, is a long-term liability and the government will have little power over foreign-owned entities, it has to be very careful before taking such a call.”

How It Will Be Implemented?

To enable the increased investment rate:

Foreign Direct Investments in any sector needs a check. In the Insurance sector, it needs to be stricter as a common man’s money will be at stake. Before implementation of this CAP all the policies regarding ownership and control should be checked by the Regulatory Authority. Once foreign investors come in the market the Government will have no control over it. Implementation of this rule will bring strong completion in the market. The common man can benefit from this competition.

The Introduction of Alternate Minim...

Tax is the primary source of revenue for the Government of India. The Indian government has giv...

What are the Different Methods for...

F&A outsourcing is chosen by a lot of business because it can bring about a lot of cost sav...

Invoices are important for all businesses whether they provide products or services.  Invoice...