Major Highlights of the Union Budget 2021-22 (Part-2): Pillars to Energise the Economy 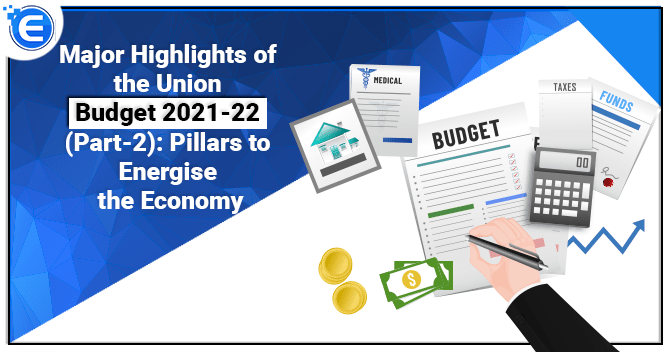 This Finance Minister Nirmala Sitharaman unveiled the Union Budget 2021-22 on the first day of February 2021. With a tablet computer, the finance minister delivered the first-ever paperless budget address. The budget has a much greater significance considering the pandemic that caused economic distress. In this article, we shall cover the six pillars of budget proposals, and it may be noted that this article is in continuation to the Part 1 of the Union Budget 2021-22.

The Union budget 2021-22 focuses on six pillars for reviving the economy:

Now let’s take a look at each one of them in detail.

Health and Well Being

Further, the finance minister announced the initiation of a new centrally sponsored scheme named PM Swasth Bharat Yojana. This will be launched with an outlay of about 64, 180 crore rupees over six years.

It is expected to meet the following goals:

Some of the main interventions of the scheme are as follows:

Provision of 35,000 crore rupees has been made for the Covid-19 vaccine by the government and committed to provide more if required.

Physical and Financial Capital and Infrastructure

A bill to set up Development financial institution[1] will be introduced. The government has provided a sum of 20,000 crore rupees to capitalize this institution.

With respect to Petroleum and Natural Gas, the following initiatives have been announced:

In a critical announcement, the finance minister stated that in the Atmanirbhar package there shall be a policy of strategic disinvestment of PSUs, and she further asserted that the government has approved the same.

The finance minister claimed that the government is committed to the welfare of farmers. To provide adequate credit to farmers, the government has raised the agricultural credit target to 16.5 lakh crore rupees in FY 22. In a critical announcement to boost the value addition in agriculture and their exports, the scope of Operation Green Scheme will be enlarged.

With a view to facilitate credit flow under the Stand up India scheme for SCs, STs, and women, the government proposed to reduce the margin money requirement to 15%, and in this budget 2021-22, the government has provided 15,700 crore to this sector.

An initiative is underway to benchmark skill qualifications, assessment, and certification in partnership with the UAE. The government also has a collaborative training inter training programme between India and Japan.

Government is all set to undertake all new initiative called the National Language Translation Mission, which will enable the wealth of governance related knowledge to be made available in major Indian languages.

The New Space India Limited a PSU under the Space Department will execute the PSLV-CS51 launch carrying the Amazonia Satellite from Brazil.

As part of the Gaganyaan mission, four Indian astronauts are trained on Generic Space Flight aspects in Russia. The first unmanned launch is slated for later this year.

Steps will be taken for the reformation of the tribunals for delivering speedy justice. The national commission for allied health care professional bill has been introduced, and National Nursing and Midwifery Commission bill will be introduced to bring transparency and efficiency.

Further, the finance minister has also proposed to provide 1000 crore rupees for tea workers welfare in Assam and West Bengal.  A special scheme will be devised for it.

The Finance Minister also announced that the government plans to continue the path of fiscal consolidation and desire to reach a fiscal deficit level below 4.5% of GDP by the year 2025-26. For information on direct and indirect tax proposal of Budget 2021-22, kindly refer to the first part of the article.

To curb abrupt resignation of auditors, new SEBI norms made it mandatory for auditors of listed...

Legal Analysis of Donation to Polit...

Individual who donate money to an electoral trust and recognized political parties can claim fu...