An Overview of Insider Dealing Regulations 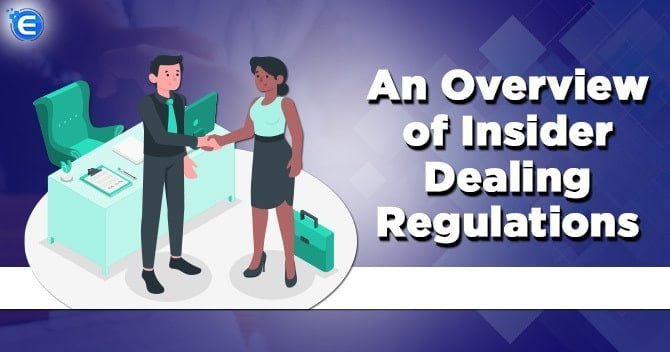 What is Insider Dealing?

The term insider dealing is also known as insider trading in India. Insider dealing or insider trading has been present since the twentieth century. Insider trading is understood as taking undue advantage of unpublished price sensitive information related to stocks, shares, and securities. Information is exploited by developing a friendly or privileged relationship with the individual or institution dealing with securities. This privileged agreement is called as insider dealing as the individual would have an unfair advantage when selling the securities in comparison to the public. The price of securities is altered due to the fact of the disclosure of information.

Insider Trading in the USA and the UK

The main regulatory authority dealing with insider dealing in the USA is the Securities Exchange Commission (SEC). USA was the first country to enact the law for insider trading. The Securities and Exchange Act, 1934 was enacted to regulate insider trading in the country. Strict penalties are enforced for insider dealing in the USA. During the 2001 global crisis, Enron one of the largest energy companies in the USA filed a bankruptcy petition for misleading investor’s money.

One of the issues which led to the downfall of the energy giant is insider dealing. Insider dealing was not only present between the employees, but also present in the senior management. The Securities Exchange Commission looked into this problem and imposed a heavy penalty. Due to this the Sarbanes Oxley Act, 2002 was enacted to have a framework for corporate governance and insider dealing.

Scenario in the UK

The main regulation dealing with insider trading in the UK is the Financial Services and Markets Act 2000 (FSMA 2000) which regulates financial transactions in the country. Apart from this, the Criminal Justice Act, 1993 provides the legal framework for insider dealing in the UK. None of the acts provide a specific definition of insider trading.

The FSMA helps in preventing market abuse related to insider dealing of securities. The main regulatory authority for the securities market in the UK is the Financial Services Authority (FSA). The FSMA defined market abuse as committing any of the seven activities as per the act.

The following activities would come under the meaning of market abuse:

The above activities would be considered as market abuse. Therefore, if any of the above activities are conducted which leads to disclosure of information, then it would be considered as insider trading in the UK. USA and the UK have specific regulations dealing with insider trading.  Non Compliance with the above regulations would attract strict penalties.

The following is included in the section:

Contravention of the above provision would lead to imprisonment for a term which may extend to five years. Apart from this, the authority can impose a fine of Rs 5 lakh rupees. This may extend to Rs 25 Crore or three times the amount of money secured from insider trading. The authority has the right to impose either one of the penalties or both.

Under the SEBI Act, the SEBI (Prohibition of Insider Trading) Regulations[1], 1992 (‘1992 Regulations’) have been brought out by the SEBI. This has been amended in the year 2015 with few amendments in 2019. However, the 2015 regulation is the current law that deals with insider dealing. There is a strict penalty for non-compliance with these provisions.

What are the features of the 2015 regulation?

The 2015 regulations have brought about many changes in the working of the act.

The following are the changes related to insider trading:

The information which is price sensitive must not be communicated to any other individual in the company. There is an exception to this. If the communication is made in furtherance of the business or made for a legitimate purpose, then such communication is allowed.

The regulations also state that no individual shall collect such information from an insider of the company. Such information will include any security that is proposed to be listed in a stock exchange or any other form of revelation regarding the security.

The following are the exceptions under the 2015 Regulations:

The following are the defences that can be used in insider dealing:

The trading plan will have the following:

Securities Exchange Board of India (SEBI) extended the deadline for the submission of financial...

Procedure for Shares issue through...

Where the Company having a paid-up share capital at any time, proposes to increase the subscrib...