A Complete Guide on Auditing Standards Issued by ICSI: Applicable from 1st April 2020 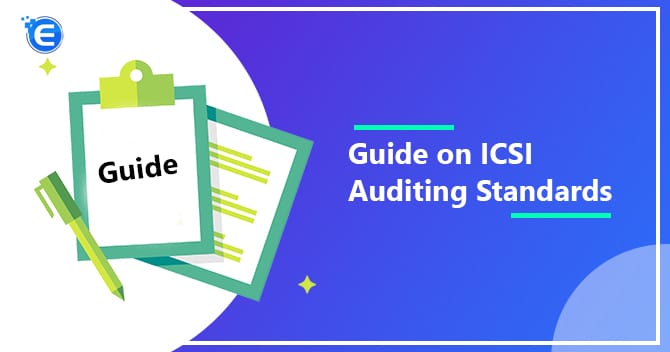 What is the Aim behind Reconstructing the Auditing Standard Issued by ICSI?

The basic aim behind reconstructing the auditing standards by ICSI is as follows:

The auditing standard issued by ICSI has been divided into four parts, as shown below:

This Auditing Standard applies to the Auditor undertaking audit engagement under any statute. The auditing standard on Audit engagement deals with the auditor’s role and responsibilities relating to an audit engagement and also the process of entering into an understanding or an agreement with the appointing authority for auditing purpose. The Auditing Standard on Audit Engagement (CSAS-1) applies to the practising Company Secretaries or PCS as defined in the Company Secretaries Act, 1980, who commences the audit assignment as per:

The fundamental objective of the auditing standard is to lay down for the auditor basic principles and procedures which must be followed while accepting or continuing with the Audit Engagement by agreeing to the terms of engagement with the Appointing Authority or any changes therein and matters related thereto.

This auditing Standard issued by ICSI is applicable to the Auditors in the following situations:

Read, More: Why Secretarial Audit is Mandatory for Companies?.

In case there is any change in terms of audit management in the middle of the ongoing audit, the auditor shall follow the standard and also initiate a revised engagement letter following the terms of the standard prescribed.

Note: Audit Engagement means all the detailed terms of reference of appointment, which will include the scope of audit, remuneration and also the limiting conditions if any.

Note: Predecessor or Previous Auditor here is referred to an Auditor who has conducted the most recent audit assignment of the auditee and also has submitted a report thereon prior to the current auditor or was engaged as an auditor, but he could not complete the audit assignment due to resignation, termination or any other case1

What are the steps to be taken by the auditor with respect to Audit Engagement?

The auditor shall follow the following steps with regard to the Audit Engagement:

The audit engagement letter shall include the following points:

Communication to the Predecessor or Previous Auditor

Communication shall be done by the auditor to the previous auditor if any before accepting the audit engagement.

The auditor shall accept the audit engagement within the limit of a number of audits.

This section covers specific protocols prescribed for the auditors to follow the audit process and documentation. The basic aim of this standard is to prescribe principles to an auditor:

Note: Audit Documents here is referred to the working papers which is prepared or the reports obtained by the auditor in connection with the audit.

Note:Audit Evidence mentioned above means the relevant information and documents which is gathered while conducting audit for arriving at a conclusion on which the auditor concludes his opinion.

What are the Steps to Conduct Proper Audit Process and Documentation?

The proper steps to conduct an appropriate audit process and documentation have been listed below:

An audit plan must be prepared by the auditor for conducting audit as per the terms of audit engagement. Audit planning means to establish and develop an overall audit process, including but:

The auditee shall check the risk assessment with respect to the audit engagement considering the following factors:

Information about the Auditee

The auditor must obtain sufficient information regarding the auditee which will be relevant for conducting of audit and forming an opinion and its expression.

The auditor shall use systematic and comprehensive checklists for auditing and also to verify the compliance requirements.

Collection and Verification of Audit Evidence

The auditor shall get confirmations from third parties, wherever it is required, with respect to information which is related to such party.

The auditor shall check the Audit Evidence before getting into any conclusion.

CSAS-3: Auditing Standard Issued by ICSI on Forming of Opinion

This auditing standard issued by ICSI applies to the auditor undertaking audit under any statute. This standard deals with the manner for forming auditor’s opinion on subject matter of the audit. The basic objective of the auditor here is to prescribe the basis and manner for evaluation of conclusions drawn from the audit evidence and also to obtain and express the opinion through a written report.

What does the Auditor Cover through this Reporting Standard?

This Auditing Standard issued by ICSI applies to the auditor undertaking Secretarial Audit, which is prescribed under Section 204 of the Companies Act, 2013 and SEBI (Listing Obligations and Disclosure Requirements), 2015. The Standard deals with the basis and manner to carry out the Secretarial Audit.

The significant objective of this Standard is to set the principles for evaluation of statutory compliances and also for corporate conduct of auditing.

This standard covers the following:

Auditing standards issued by ICSI are introduced with an aim to regularize the audit conducts and also to have a single protocol for the auditors all over the nation. These accounting standards will be applicable with effect from 1st April 2020. The Company Secretaries will check the applicability of the mentioned auditing standards by ICSI, in every audit as they have expertise in auditing methods, tools and techniques. This will make the audit errorless, professional, uniform and also fast.

Also, Read: An Internal Auditor: Why are they important in a Company?.

In the "Financial Stability and Development Council" meeting held on 20th June 2019, the highli...