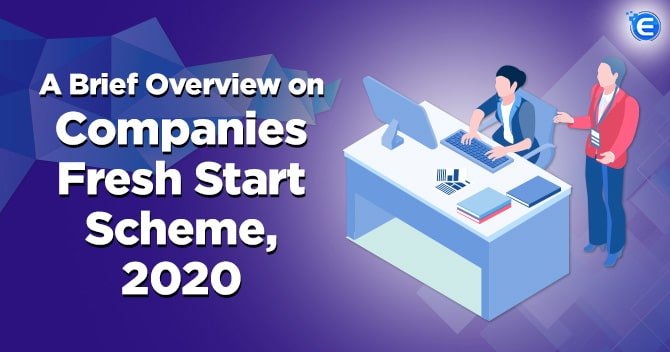 The Ministry of Corporate Affairs introduced the Companies Fresh Start Scheme, 2020 on 30th March 2020 vide it’s general Circular 12/2020. This scheme provides an opportunity for all defaulted companies to make a fresh start. As the name itself suggests, Companies Fresh Start Scheme (CFSS), provides the platform to all the companies who are under default to file all the documents afresh without any additional fees. The Ministry of Corporate Affairs (MCA) had earlier introduced various such schemes on the request of various stakeholders. The Ministry had introduced schemes like company law settlement scheme 2014 and cods scheme 2018 earlier. The CFSS 2020 scheme shall be for initial period of six months. It will come into force from 1st April 2020 and shall be effective till 30th September 2020. In this article, we shall have a brief overview of this new scheme introduced by the government.

The Ministry of Corporate Affairs has taken quite strict measures in the last two years. It has struck off a large number of companies on its own motion and has disqualified the directors of those companies from being a director for five years. This is because of the fact that the companies have not filed due to statutory annual returns for the last three consecutive financial years. These large companies have a sound business track, and compliant background is also stuck because of the same Director of anyone disqualified director in those large companies and due to this their compliances are also at stake.

The cost of compliances of the above-mentioned companies is also much costlier than normal companies due to huge additional fees applicable under section 403 of the Companies Act, 2013. As a result, there is a need to come up with a detailed scheme by providing an extra chance of making their default good therefore the various stakeholders have requested to the government for grant of an opportunity to file all the requisite belated documents or returns.

The CFSS, 2020 has been introduced to facilitate the companies registered in India to have a fresh start. The ministry has taken various steps to help out the companies which are under default and especially to the small and inactive companies. The government, considering the representation and the request of the stakeholders, has come up with this novel scheme.

A company that has made a default in filing the documents, statement, return etc. including the annual statutory documents on the MCA-21 registry in due time is known as a Defaulting company under the Companies Act, 2013.

Applicability of the scheme

The above mentioned two exceptions are as follows-

It is critical to note that immunity from prosecution proceedings will be provided to the extent that such prosecution or proceedings for imposing a penalty under the companies act relating to any delay in filing of the belated documents. Any other consequential proceedings involving any proceedings related to the interests of any shareholder or any other person of the company, its directors, key managerial personnel (KMP) shall not be covered under such immunity.

The Companies Fresh Start Scheme shall not be applicable to the following companies:-

Procedure to be followed by Defaulting Companies

The defaulting company must file their documents/returns/other statements, statutory annual filing documents such as financial statements and annual returns in prescribed respective e-forms by paying the normal statutory filing fee without any additional fee payable under section 403 of the Act read with Companies registration offices and fee rules, 2014 within due immunity period.

The defaulting companies shall file the form CFSB after making all default good and after all filed documents are taken on the file, on record or approved by the designated authority as the case may be and after the closure of the scheme but it must not be after the expiry of six months period from the date of closure of the scheme. There shall be no filing fees of form CFSB-2020.

The scheme for Inactive Companies

The companies can simultaneously apply and get themselves declared as Dormant Company under section 455 of the Companies Act, 2013. Under this scheme, the companies should file e-form MSC-1 at a normal fee on the said form to be declared as dormant companies.

The company can apply for striking off the name of the company by filing e-form STK-2 by paying off the fee payable for form STK-2.

The designated authority after the end of the scheme shall take necessary steps against the companies that haven’t availed this scheme and who have defaulted in filing the required documents in a timely manner.

The Companies Fresh Start Scheme has been a great relief to companies considering that the MCA has been in strict action mode for the last two years or so. The CFSS, 2020 scheme significantly reduces the financial burden on the corporates. One of the notable features of this scheme is the one-time waiver of the additional fees for delayed filings during the enforcement period of this scheme. The scheme is also welcomed by the corporates for its provision of giving immunity from penal proceedings. However, it must be noted that the immunity provided under this scheme is only against delayed filings and not against substantive violation of the law.

Role of NCLT in Promoting Interest...

In order to decide upon all the matters related to companies, banks, and financial institutions...