Fraud and Misconduct Investigation- An Overview

In the global corporate landscape, frauds have been occurring ever since the 1800’s. With the beginning of the 19th century there were lot of frauds which escalated in the USA and the UK. Some of these frauds caused the bubble burst throughout the world.

Taking the US perspective, some frauds have severely affected several stock markets, alarming the securities regulator the Securities Exchange Commission (SEC). Such frauds which brought about the Great Depression in 1930’s and the 2001 financial crises have affected the economy.

For example, the Enron scandal shook stock and securities markets throughout the world. Due to this the SEC brought out the Sarbanes Oxley Act (SOX Act), which would look into companies that have their securities listed in stock exchanges.

The main motive of bringing this act is to ensure that entities follow the ‘comply and explain principle’. Apart from this, the SOX act also gave hope to companies that get their statements audited by accounting firms.

In early 1990’s there have been several scandals which rattled the Indian ecosystem such as the Harshad Mehta Securities scandal. Apart from this the Satyam Scandal, brought the importance of the compliance requirement for companies. However, it can be stated that the Companies Act, 2013 was brought out to handle issues such as this.

Hence companies must place importance in having specific procedures related to Fraud and Misconduct Investigation. There has to be a system in place to identify and assess the amount of risk present in a particular company or firm.

Benefits of Fraud and Misconduct Investigation

The following benefits are present when a firm carries out fraud and misconduct investigation: 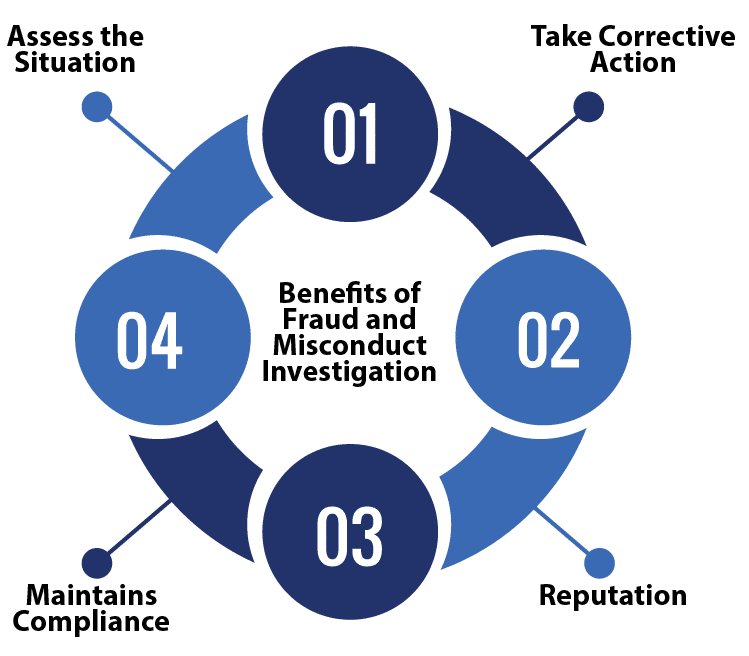 Checklist for Fraud and Misconduct Investigation

The following checklist has to be considered for fraud and misconduct investigation in an organisation:

First and foremost the organisation would make a formal decision to investigate. The following would be considered under this:

Here it would be useful for the company to develop a plan for investigation. Regular follow ups must be carried out for the protocol within the organisation. The following steps would be considered under investigation plan and protocol:

In the next step, the records have to be reviewed by the executives and the company. The following would be included in the process of review and documentation:

This step will include reviewing the particulars related to the evidence. The following has to be conducted during this step of reviewing evidence:

How to reach Enterslice for Fraud and Misconduct Investigation

Fraud and misconduct investigation is the formal process where an organisation presents its findings based on a detailed investigation.

Though both the terms, fraud and misconduct may have a similar meaning, there is still some difference in these terms. Fraud can occur at any organisation. However fraud can also occur when an individual embezzles money from another or from a form of specific fund. Misconduct would be the situation which is carried out by a professional or a group of professional. Usually the term misconduct would be utilised to identify professionals.

The term fraud response management is used to determine the efficiency in which an organisation or department reacts to a potential fraud.

The literal term or meaning of mitigation would include to reduce damage or to reduce effect of something. Hence mitigation in fraud and misconduct would usually involve reducing the amount of frauds and misconducts from happening in a particular organisation.