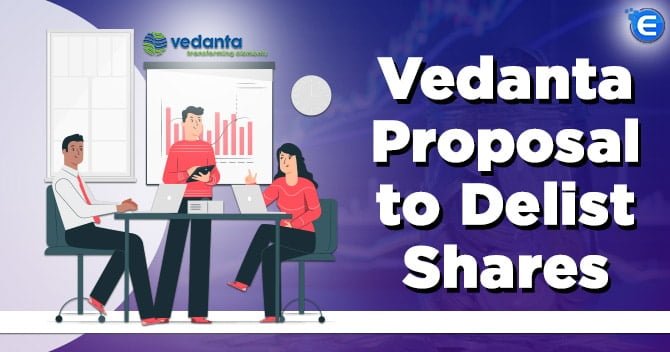 Vedanta Limited (“Vedanta” or “the Company”), listed on BSE and NSE, is promoted by billionaire Anil Agarwal. Vedanta is a diversified natural resources company undertaking mining, producing and exporting base metals. The Company distributes metals such as zinc, iron ore, copper, silver and aluminium. Vedanta also operates powers plants and active in oil and gas sector. Vedanta is a leader in mining industry in India and accordingly forms part of several indices on both BSE and NSE (Nifty 50, MCX-SX 40, Nifty 100, S&P BSE 50, S&P BSE 100 etc). The market cap of the company at 26 May 2020 was c. INR 33 thousand crores. Shareholding pattern of the company (source; Business Insider):

Delisting is the removal of listed shares from a stock exchange. Delisting may be voluntary or forced, results shares unavailable for trading on the stock exchange. SEBI (delisting of equity shares) regulations 2009, require approval of board and shareholders. The shareholders’ approval will be accepted if votes cast by public shareholders in favour of the proposal amount to at least two times of votes cast by public shareholders against it. The voluntary delisting will be considered successful if the shareholding of the promoter together with the shares accepted through at the final price reaches 90% of the total share capital of the company.  The promoter is not allowed to participate in the process and the floor price is derived based on the reverse book building process.

During May 2020, the board of Vedanta has approved delisting of shares voluntarily from both BSE and NSE and offered to buy back c. 49% stake held by public shareholders. Out of nine directors in board, four are independent directors. Independent directors have fiduciary responsibility to protect all shareholders’ interest.  The board set a floor price of buy-back at INR 87.25 per sharere presenting 10% premium over closing price as on 11 May 2020 on BSE. Estimated consideration for the buy-back of shares at proposed floor price works out to c. INR 16 thousand crores (or c.US$ 2.1 billion). However, the final price of the buy-back will be determined in accordance with the reverse book building mechanism as set out in delisting regulations by SEBI.

The Group believes that delist of Vedanta would simplify its processes and will provide the Group with enhanced operational and financial flexibility in a capital intensive business. Further, the proposed delist will align the Group’s capital and operational structures, streamline servicing of the Group’s financing obligations and support in acceleration of reduction of debt in the medium term.

The Company is in the process of obtaining approval to delist shares and buy back floor price from shareholders. As per media reports, promoters in parallel are negotiating a debt facility from top banks to finance this transaction.

Read, Also: What are the SEBI Regulations Relating to the Delisting of Securities.

Voluntary delisting of a large cap company generally carried out when prevailing listed stock price is below intrinsic/fundamental value or, a deal is being negotiated by the promoter with private investors (private equity or strategic) at a price higher than listed price or management wishes to avoid listing regulations. In these scenarios, management/promoter would benefit at the expense of minority shareholders and other stake-holders.  On the other hand, voluntary delisting, under bearish market, does provide an opportunity to promoters to un-lock company’s value by using its resources with minimum regulations.

The promoters’ claimed that the proposed delisting will provide public shareholders of the Vedanta an opportunity to realise immediate and certain value for their shares at a time of elevated market volatility. However, the proposed buy back price of INR 87.25 per shareis more than 50% discount to 52 week high listed price of c. INR 180 per share. Further, the proposed buy-back price is more than 40% lower than the listed price of INR 154 at the end of December 2019 (when China informed WHO about Carona virus). Further, Indian Rupee has depreciated more than 10% against US Dollars during last 12 months. As per opinion of several analysts, promoters of Vedanta are trying to take advantage of negative capital market sentiments and grim economic outlook by purchasing stock at deep discount to long term fundamental value.

The world is suffering from a highly contagious disease Covid-19 since beginning of this year. The disease has caused deaths and trauma and considered a worst human tragedy since World War II.

Indian Government has imposed a strict nation-wide lock-down during March 2020 (in the interest of general public) to avoid spread of Covid-19 triggering shutting down businesses and plants. The lock-down is still continuing (for a period of more than 2 months) until 31 May. Other countries (such as USA, UK, Japan etc) have also reduced economic activities significantly and imposed lock-downs at several point in time. These measures significantly impacted economy triggering collapse of stock markets in India and other countries.In this awful situation, voluntary delist of a large cap company Vedanta would further augment negative sentiments of local capital markets.

Indian Government has recently imposed restrictions on FDI/FPI inflows from certain countries to protect local companies from predatory take-overs by foreigners at low multiples owing to Covid-19 pandemic situation.  Similarly, Indian Government should step-in to minimise exploitation of minority shareholders and other stake-holders by local promoters/management. It can-not be denied that Government imposed lock-down triggered collapse of the stock market and economy.

Following footsteps of Vedanta, other listed companies may also take similar action. United Spirits and Adani Power are considering delist their shares to take undue advantage of the situation.  This will deteriorate local capital markets sentiments but also hampers our country’s image globally.

Exit price will be determined by an independent valuer. However, the valuation may work in favour of promoter owing to depressed multiples and grim economic outlook caused Covid 19 pandemic situation.

From promoter’s standpoint, the proposed delist of Vedanta and buy-back of shares may be a prudent financial decision to maximise their wealth. The regulator has provided protection to minority shareholders under normal circumstances. The move (if executed) at the proposed share buy-back price of INR 87.25 per piece should be considered as an opportunistic and exploitation of minority shareholders and other stake-holders. In my opinion, the regulator/Government should intervene to check on these predatory practices and diffuse undue advantage to promoters in this exceptional Covid-19 pandemic situation.

Also, Read: SEBI’s Relaxation to Listed Companies for filing Financials amid Covid-19 and other measures taken by Regulators.

The Securities and Exchange Board of India recently simplified the delisting norms, which is ex...

Dissecting the Powers of SEBI

Securities and Exchange Board of India came into existence as a statutory authority by virtue o...

Before issuing a research report, a Research Analyst should disclose certain mandatory disclosu...