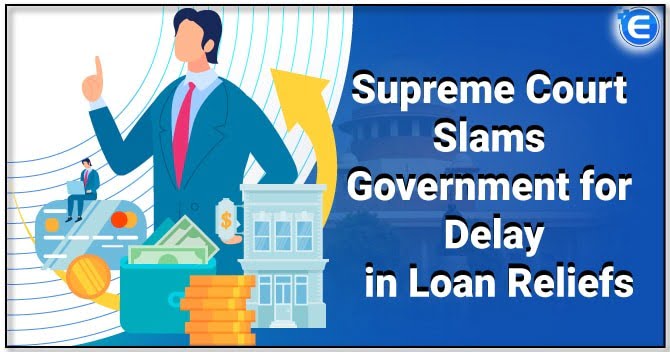 The Apex court of India on October 14th, 2020 rejected to permit the government one month to execute the waiver of interest on loans of up to Rs. 2 crores, asking a verdict has already been taken. Why should it consume so long to implement it? The Central government has also argued that it required the time for various formalities, but the court set a new deadline of 02 November 2020.

The Hon’ble Justice of Supreme Court MR Shah, who was also part of the three-judge bench, stated that “The Common Man’s Diwali is now in the hands of Government,”. The common people are now in trouble. We are worried about people with a loan up to 2 crores,” said the Supreme Court bench, which has been pressing the government to figure out a way to give assistance to the people who have been not capable to repay loans due to the Covid-19 induced lockdown.

The Supreme Court slammed the central government that one month is not required to implement the decision. This delay in the implementation of this is not in the wellbeing of the common man. It is a welcome pronouncement to give assistance to the small people. But some solid results are required,” said the bench comprising justices R Subhash Reddy, Ashok Bhushan, and MR Shah.

The Central government on delay in loan relief

The union government has already said that it would ignore the compound interest on the loans, which is probable to bring relief not only to single borrowers but also banks. The counsel of the central government said it was an “enormous burden” but added that they are not “declaring the figure”.

In the month of March, the Reserve Bank of India[1] had arranged three months moratorium on loans due to the coronavirus pandemic. It was later extended till 31st August 2020. In the month of September, the Apex court of India, in response to petitions, asked the government to chart out a route to help borrowers. An interest waiver for the period of six months moratorium period was also required by a bunch of petitions.

The union government was probable to tell the court a way ahead on an extension of the moratorium, sector-wise relief, waiving of interest, and its decision on the recommendations of the Mehrishi Committee, which was asked to estimate the impact of interest waiver during the coronavirus linked moratorium. However instead, the government sought more time, saying the outer limit for bringing assistance to borrowers is November 15.

Apex court of India on October 14th, 2020 rejected to permit the government a month’s time to execute the waiver of interest on loans of up to Rs. 2 crores, but unable to fulfill this promise, the Apex Court slammed the central government that one month is not required to implement the decision. This delay in the implementation of the relief is not in the well-being of the common man. The government should implement the benefitting decision to intend of making excuses for the well-being of society.

If any individual is thinking to start or run and establish an NGO (Non Governmental Organisati...

Offences And Punishments Under New...

Overview The Ministry of transport and highways recently notified about the changes in the exis...