Starting a Company in Indonesia: Challenges and Benefits 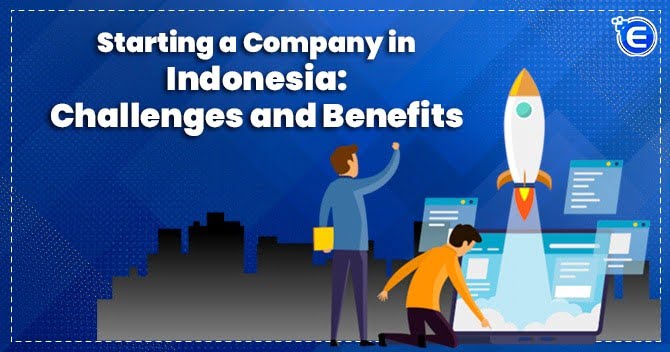 One of the Southeast Asia’s largest economic hub, Indonesia has eclipsed majority of Asian countries such as Singapore, Thailand, Malaysia etc., in terms of its entrepreneurial growth. Due to the wealth of natural resources and stable growth in Indonesia, foreign investors in big numbers have invested in the country. However, setting up a company anywhere in the world encompasses challenge. Knowing the challenges involved beforehand can go a long way in being prepared for the potential challenges. In this article, we provide you with a complete perspective including challenges and benefits of starting a Company in Indonesia.

Benefits of starting a Company in Indonesia

Apart from the wealth of natural resources available in Indonesia there are many other reasons why you should start a company there. Below we have explained few of the major benefits that business owners can exploit:

Challenges of starting a company in Indonesia

Some of the primary challenges of starting a company in Indonesia includes complex market, business culture, corruption, lack of transparency bureaucratic inefficiency, red tapism, elaborate tax system, among others.

Indonesia is an archipelago with over 17000 islands and 500 languages being spoken. It is a complex market to do business in. This means you need to conduct serious market research, validation and study about which customer segment you wish to target. Hence it is advisable to test the market first before starting a company there. Further, in order to do most forms of businesses you will require obtaining special licenses and permits from the regulatory authority. This can be a challenging tasks if you have to do it all yourself. It can be a time taking administrative hurdle. Investors will be required to interact with different organizations and ministries during the process of doing business in Indonesia.

Corruption has been the biggest obstacle which has reduced investment benefits. While there have been various steps taken to curb corruption in the country, the change has been gradual. However, by moving the process online, the Indonesian government has taken steps to reduce bribery and collusion.

Dealing with the challenges

Having discussed about the challenges, Indonesia still remains one of the hotspot locations to start a company and do business. The challenges mentioned above should not discourage any entrepreneur from exploring business opportunities in Indonesia but these have been mentioned in order to make you aware of the obstacles beforehand. The Indonesian government has promised certain structural reforms as priority. Hence going forward one can expect more relaxation in regulations which will reduce formality, ease barrier for investments and tighten norms to fight corruption.

Tips to consider before starting a company in Indonesia

Please note the following tips that can be handy for someone who is looking to expand business to Indonesia:

Read Our Article: How to Register Company in Indonesia?

LLC Registration in Singapore: Is i...

Singapore is one of the countries which come under the category for ease of doing business. Hen...

If you are on the verge of starting a business, then you must read this blog about the business...