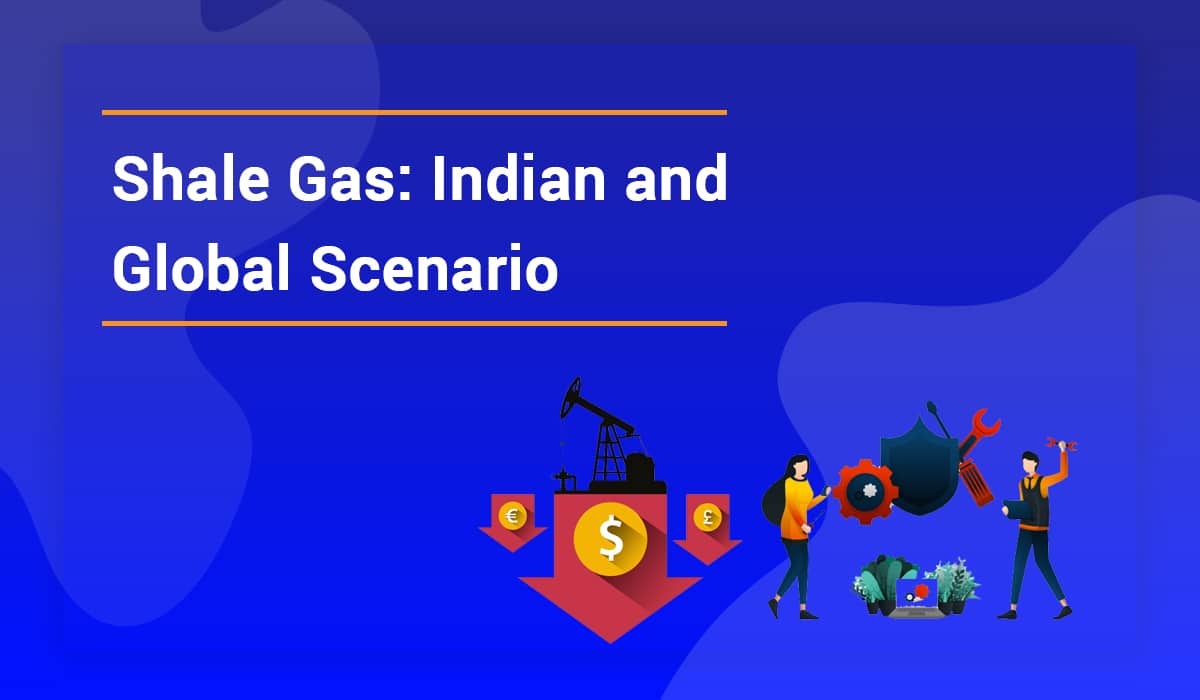 Shale Gas is one of the latest discoveries in the international energy sector. If we consider the present scenario, the worldwide demand for the unconventional sources of energy is hastily growing. But the study indicates that there’s a massive gap between the supply and demand of these energies.

Thus, through this blog, we aim at presenting the actual existence and various significances of Shale Gas in India as well as around the Globe.

Let us first discover the market size and understand this natural gas in brief.

As per the recent study, the Shale Gas Market could hit $184 billion by the year 2021. Furthermore, the projection of growth rate at a Compound Annual Growth Rate (CAGR) for 14.4% is expected between 2015 and 2022.

Moreover, the increasing demand for natural gas in India has touched the rate of 20% per year. In turn, this costs the economy of India with an import bill of approx. $ 120 billion annually.

We will discuss the segmentation of the world Shale Gases into two ways:

What is Shale Gas?

It is defined as the natural gas available on the organic matters in the absorbed form. It is present within fracture, cracks, and pores of the shale rock.

It is believed that Shale (fine-grained, clastic sedimentary rock) could be rich sources of natural gas and petroleum. Shale rock is composed of mud. This mud is a mixture of clay minerals’ flakes such as calcite and quartz.

In comparison to other rocks, Shale could accumulate an excess of organic materials. Besides, these are deposited under marine, fluvial, and lacustrine environments. Furthermore, if we talk about the origin of the shale gas, it is thermogenic.

Shale Gas is a promising unconventional resource of energy which ranges from organic-rich to fine-grained rocks. Apart from this, there are multiple features of this natural gas which has a whopping demand worldwide.

Characteristics of this gas are as follows:

Shale Gas Scenario around the Globe

According to the recent study by Energy Information Administration (EIA) presented that 41 countries in the world have a total of 95 shale gas basins.

Some of them include India, Australia, Mexico, Canada, China, etc.  But it’s the USA which has exploited and explored the gas effectively. Furthermore, it has started generating revenues at quite a large extent.

However, India has not exploited this unconventional energy resource. But the Government of India is looking into the matter of carrying out the detailed exploration of the gas.

India is a huge reservoir of shale gases and has shale rock deposits across the Gangetic plain, Rajasthan, Gujarat, Assam, and many coastal areas.

India has several basins with organic-rich shales, mainly the Krishna Godavari, Cauvery, Cambay, and Damodar Valley basins. There are few other potential reserves like the Upper Assam, Pranhita-Godavari, Vindhyan, and South Rewa.

Let’s discuss the basins which consist of shale gases. They are as follows:

Every block is classified by local lows among which a few have sufficient thermal maturity to be likely for shale gas.

Other Basins in India

Apart from the above-described sources, there are some other basins as well that contains shale rocks. They are as follows:

Challenges in the Production of Shale Gas

Considering the unexpected success of the USA and Canada, many companies in Asia and the Middle East who operate in the upstream gas industry are keen to work on the production of Shale Gas. Obtaining gas from rocks with permeability in nanodarcies seems quite miraculous.

Therefore, companies that are operating in the places of this gas reserves are ready to start the gas extraction process. However, there exist some non-technical challenges which restrict them to extract gas from these specific areas.

Some of the serious concern that companies follow are:

When compared to the USA and Canada, the cost of drilling and completing are 2.5 to 5 times higher in Asian countries. This problem could be due to lack of government support (as subsidies) and concerned infrastructure in the country.

Incompetence to experiment with wellbores

In western countries, reservoirs and wells are made with the need to analyse- using the process of trial and error. However, in Asian countries, companies find difficulty in grasping this concept. In such countries, companies apply much of the engineering perspective based on the actual performance of wellbore instead of upfront before drilling the well.

Lack of political will

The political condition of every country affects its development and has a direct impact on every activity going to be started. With considerable political differences amongst many countries in Asia and the Middle East, most of them have been found in war with each other.

Besides this, political instability, bureaucracy, corruption, and restrictive customs regulations all affect the operation of gas extraction.

Shortage of infrastructure and fiscal incentives

In countries like the USA and Canada, they offer budgetary incentives and have an excellent infrastructure available for the process. But other countries lack here and don’t provide any significant fiscal incentives.

Companies have to face huge competition with several existing products in the market and also because of the monopoly of gas-rich countries.

In the USA, it is mandatory to disclose the significant and substantial information for every drilled wellbore. Furthermore, this information is available for everybody on the public-access database. Therefore, operators can compare practices and completion methods for numerous wells in similar formations.

However, in Asian countries, there is a lack of shared information,which makes it daunting for operators to exploit energy resources.

It’s one of the biggest challenges faced by the countries. In the process of gas extraction, a tremendous amount of chemically-treated water is required to create fractures in the shale rocks. As a result, it creates water scarcity in the region. Hence, many countries are not allowing companies to start the extraction process.

Shale gas could be one of the biggest fulfilments of primary energy requirement in the world if exploited and explored adequately.

The country like India, which depends on expensive energy imports, can meet the increasing energy demand by unlocking the domestic shale gas. However, the USA already has exploited the use of gas in the country, and it had a significant impact on its economy.

Other countries too, can take a note from the USA and boost their economic condition with the correct usage of this gas. This, in turn, will help the government to generate more revenues and create more employment opportunities for unemployed.

When will Digital Days in India...

When an “acquirer” takes over the control of a “Target Company”, it is called Takeover....