All you need to know about Pre-Paid Instruments 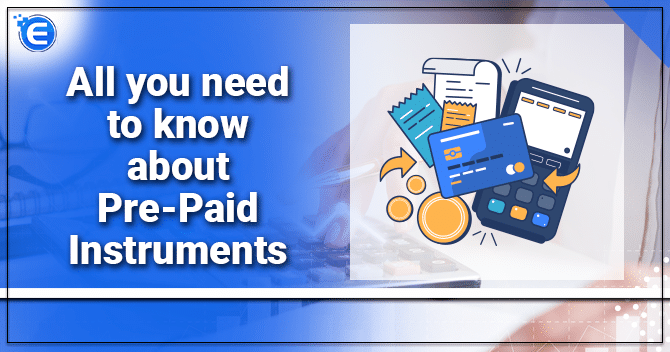 With the extensive use of technology and smartphones, it has begun to affect not only the way we use products or services but how we pay for them. One of our recent developments is Pre-paid wallet which is often mistaken for mobile banking.

Providing mobile merely as means to do the transaction through different modes of payments like net-banking and credit cards, mobile wallets use mobile phones as prepaid accounts where one can store money which can be used for transactions.

They are according to the common legal parlance, known as pre-paid instruments, where one can pre-pay the money and store it in the e-wallet/instrument which can be further used to make payments later.

These are those instruments which facilitate the purchase of goods and services against the value stored. The value stored represents the value paid by the holder by means of cash, by debit card, or by credit card.

Pre-paid instruments are mainly online wallets where one can store money and later on can pay money using the same wallet. In other words, it can also be called as electronic wallets.

Here are the types of pre-paid instruments:

These are issued by entity for facilitating the goods or services purchased from that entity only and don’t allow cash withdrawals. These instruments can’t be used for payments or settlement for third party services.

The third-party is involved here. It is issued by banks and non-banks for purchase of goods and services. Money can be paid through these instruments and it cannot be withdrawn.

According to the current legal framework, only banks are allowed to issue open instruments. It can also be used to withdraw money. Cash can be withdrawn at ATMs or PoS terminals. For example, Digital Credit Cards issued by Banks.

Earlier only Banks and NBFCs were allowed to use the prepaid instrument for online payment. Recently Reserve bank of India[1] has passed a master circular giving permission to 197 companies to operate online pre-paid instruments. With this now, we have e-wallets like PayTM Wallet, OLA money, Mobikwik etc.

In India, it is governed by the Payments and Settlements Act, 2007. According to Section 18 of this Act, it empowers the Reserve Bank of India to make required regulations time to time for the purpose of regulating payment system in India. Reserve Bank of India has already laid down guidelines for the purpose of issuance and operation of Pre-paid Payment Instruments.

RBI circular defines different kinds of payment instruments that can be created. Semi-Closed System Payment Instrumentis the common form of payment instrument as only banks are permitted to offer Open System Payment Instruments.  It can be used for the purchase of goods & services from the identified merchants and service providers, but it doesn’t allow withdrawal of the currency from the instrument. Non-Banking Finance Companies (NBFC) and companies incorporated in India are eligible to apply for a license.

RBI issues several guidelines from time to time. It is important to keep track of all the regulations as RBI keeps updating the set of guidelines under the Payments and Settlements Act, 2007 and rules made thereunder. Key legal compliance is enlisted below:

A framework is provided for working on pre-paid instruments and online payment systems under the Payments and Settlements Act, 2007. It also provides provisions for appropriate licenses, dispute settlement mechanism, as well as penalties in case of non-compliances.

However there are appropriate provisions, but there is no proactive implementation of the said provisions by the stakeholders. Various Companies such as PayTM, Olaare regularly flouting the mechanisms by not following the KYC Guidelines, Money Laundering Norms etc. In a recent case, Uber was trying to bypass a two-step authentication process which is required for issues of pre-paid instruments.

In this era of technology and e-payments, it is required to prepare solid online systems to make sure that any company or NBFC is not able to bypass the stringent norms stated under Payments and Settlements Act, 2007 and rules therein.

Read our article:Can a struck off company get restored?

Acquisition of Immovable Property in India as per FEMA guidelines[1] is related to individuals...

P2P lending and Crowd funding are terms that are slowly but steadily growing in India. It is ye...