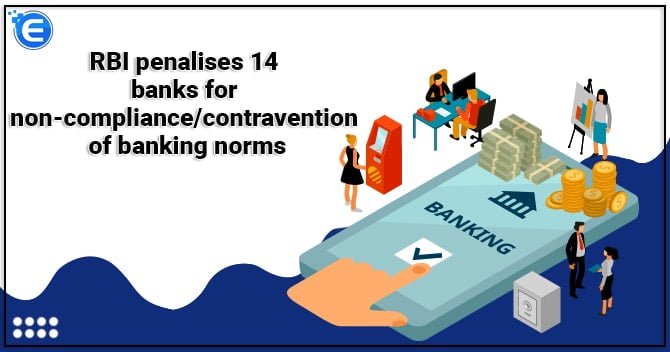 The Reserve Bank of India imposed monetary penalties on various banks such as SBI, Bandhan Bank, Bank of Baroda etc., for non-compliance/contravention of banking norms. These 14 banks include public sector banks, private sector banks, co-operative banks, foreign bank and also a small finance bank. In this article, we shall take a look at this development.

Which banks have been penalized by Reserve Bank for Non-Compliance or Contravention of Banking Norms?

In a press release released by the RBI, it stated that the penalty was imposed after a “scrutiny in the accounts of companies of a group” by the RBI. While the name of the group is not disclosed yet, however, RBI has named 14 banks on which the penalty has been imposed.

These banks include the following:

Non-compliance of lending norms and contravention of banking norms

The Reserve Bank imposed monetary penalty on the banks mentioned above for non-compliance with certain provisions of directions issued by the RBI. The directions include the following:

According to section 19(2) of Banking Regulation Act 1949, banks are barred from holding shares in any company, whether as pledge, mortgagee or absolute owner, which amount to more than 30% of the paid-up share capital of that company or 30 per cent of its own paid up share capital & reserves, whichever is less.

According to Section 20(1) of Banking Regulation Act 1949[1], banks are prohibited from granting loans/advances on security of its own shares or committing for grant of any such loans or advances to or on behalf of the following:

The Reserve Bank stated that a scrutiny in the accounts of companies of a group was carried out, and it was seen that the banks had failed to comply with the provisions of the directions mentioned above. Therefore notices were issued to these banks asking them to state the reasons as to why a penalty should not be imposed for non-compliance with the directions/provisions.

Amount of penalty imposed by the Central Bank

RBI has imposed penalty ranging from 50 lakh rupees to 2 crore rupees on the aforementioned banks for failing to comply with regulatory provisions and contravention of banking norms as provided above.

The central bank stated that the replies obtained from the banks, oral submissions made in the personal hearings, wherever sought by banks, and examination of the additional submissions, where made, were duly considered, and to an extent, the charges of non-compliance with the RBI directions/contravention of banking norms (Banking Regulation Act, 1949) were sustained. RBI concluded that it warranted the imposition of monetary penalty on the aforementioned banks.

Read our article:RBI issues Guidelines to manage Risk in Outsourcing of Financial Services by Co-operative Banks

Before Liberalised Remittance Scheme in India, permission had to be compulsorily taken from the...

RBI Initiates Video Based KYC as an...

RBI on Thursday issued news circular stating the introduction of Video based KYC which shall se...

RBI has permitted Banks to lend to InvITs , while keeping certain conditions in mind As per RBI...