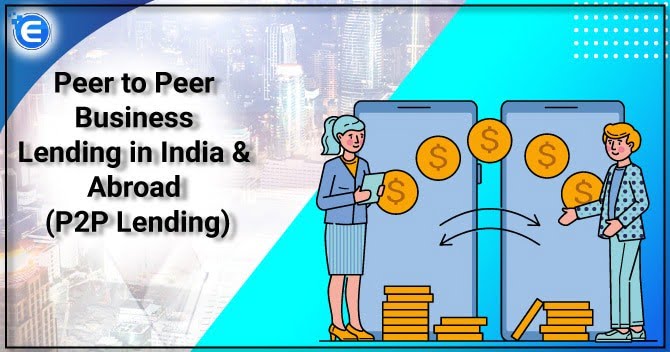 The need for personal and commercial finance is gradually increasing in the present financial scenario. The banks, financial institutions, as well as NBFCs are continually trying to bridge the gap between the demand for finance and the supply of finance. However, while applying for the funds on credit with the aforementioned entities, the individual has to go through a number of formalities and most of the times, he or she has to keep certain security to avail such loans. Now, times are changing. The development of the internet and technology has promoted the growth of opportunities for availing of finances. Here we will discuss Peer to Peer Lending Business model.

P2P is a crowd-based system to raise loans, and repayment is done with interest. It is an online system that brings the borrowers and lenders to one platform, thereby matching the demand and supply of the finance. The nature of the funds raised is unsecured. The interest to be paid is either fixed by the online platform or through the mutual agreement between the parties. The platforms earn by charging fees from both the lenders and the borrowers.

The fees paid by the borrowers are either fixed at a flat rate or as a percentage of the loan amount borrowed. The lenders pay an administration fee at a fixed rate or additional fees if they avail any of the additional facilities; such as legal advice, etc.

The platform acts as an intermediary involved in the service of the collection of the loan repayments and assessing the creditworthiness of the borrower. Unlike the normal financial intermediation, the platform does not earn from the spread between lending and deposit rates. RBI[1] regulates the P2P lending.

At the end of 2015, the global cumulative lending through the P2P platform was recorded at 4.4 billion GBP, which shows a significant increase from 2.2 million GBP in 2012.

In the global market P2P lending license is perceived differently by different countries:

Also, Read: How to Obtain NBFC License in India?.

The Peer to Peer business lending model is growing at a faster rate in India also. Many of the P2P lending platforms in India are concentrated on the micro-finance activities catering to the financial needs of the small entrepreneurs and unorganized sectors. The main advantage of this model of finance is that the borrowers get funds at comparatively lower rates, while the lenders get a better return on their investment as compared to other conventional lending methods.

Although there is no credible data available on the P2P Lending business in India, still, as per newspaper reports, there are around 30 new startup P2P lending companies in India.

Working on a P2P Model in India

In India, mostly the tech companies registered under the Companies Act, are involved in the activity of P2P lending. They act as an aggregator between lenders and borrowers. The borrower and lender register themselves with the platform, after which due diligence is carried out and those found suitable are allowed to participate in the activities of borrowing and lending.

Several other services such as credit assessment, advisory, recovery, etc. are also provided by these online platforms. Moreover, the documentation service is also managed by the platform. The amount of the loan is transferred from the lender’s bank account to the borrower’s bank account and the platform collects post-dated cheques from the borrower in the name of the lender, thereby helping the recovery process.

The P2P model is striving to make a significant place for itself in the financial market. Peer to peer business loans can be of great help for those businesses that cannot qualify for a traditional loan but can still get a competitive interest rate.

P2P lending refers to Peer-to-Peer lending or crowd-lending. It is a new form of lending money...

All You Need to Know about Peer-to-...

Traditionally, if you wanted to borrow money, you would go to the bank and ask for a loan. The...

Effect of Ban on Unregulated Deposi...

Recently, the Banning of Unregulated Deposit Schemes Ordinance, 2019, was put into effect by th...