MSME SAMADHAAN to Recover Pending Dues from Customers by MSMEs 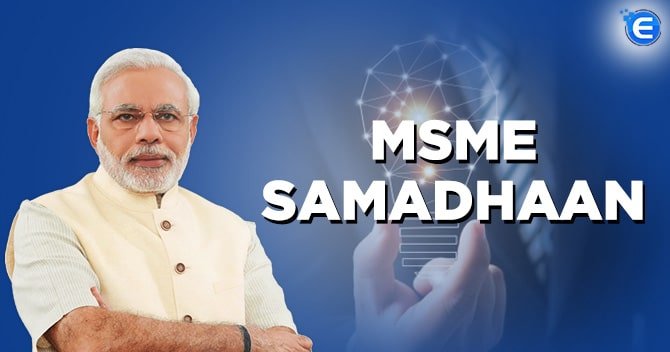 Being the backbone of India, MSMEs play a pivotal part in strengthening the economy. With over a spread of 63.4 million MSME units throughout the country, Micro, Small, and Medium Enterprises have attained a staunched position. MSME Sector contributes approx. 24.63% from service activities and 6.11% of the manufacturing GDP. Also, MSMEs generate employment opportunities to around 120 million people. However, MSMEs have been facing an issue of delayed payments of bills from the large scale companies. To facilitate the smooth functioning of MSME businesses, the Union Government launched the MSME Delayed Payment Portal called MSME Samadhaan. This blog will provide a complete guide of the MSME Delayed Payment Portal.

An Overview of MSME Samadhaan

MSME Delayed Payment Portal or MSME Samadhaan Portal was roll out to empower all the micro and small scale enterprises of India. It will enable micro and small entrepreneurs to directly register their cases related to delayed payments by Central Ministries/ State Governments/ Departments/CPSEs.

The portal streamlines the process for MSMEs to recover pending dues from customers and let them monitor the status of delayed payment in a more efficient manner. All the information on MSME Samadhaan Portal is accessible in the public domain to strive the moral pressure on the defaulters. Besides, micro and small enterprises can also avail the option to regulate their cases. It is an initiative to faster the disposal of MSME unpaid dues.

How does MSME Samadhaan Portal works?

Ministry of Micro, Small & Medium Enterprises, took the initiative for filing online applications of MSE supplier units against the defaulted buyer of goods or services before the concerned MSEFC of their State/UT. Thereby, the MSEFC Council verifies those applications and takes necessary actions to settle the disputes. The online applications are also available to the authorities of Central Ministries, CPSEs, Departments, State Government, for taking proactive measures. Let’s take a look at the fundamental aspects of the Samadhaan portal:

Micro, Small and Medium Enterprise Development Act abbreviated as MSMED Act, 2006 has laid down the provisions to deal with the cases of delayed payments to MSEs, which are as follows:

Documentation is an essential part of filing an application of delayed payment, so ensure to affix these documents:

Read, Also: Mandatory submission of details of the amount due to MSME Suppliers﻿ Online.

Any micro or small enterprise (MSE) with a valid Udyog Aadhar Number can file an online application against the purchaser/buyer of goods & services before the concerned MSEFC of his/her State/UT. The submitted applications are reviewed by the MSEFC Council. Moreover, Central Ministries, Departments, State Governments, CPSEs have access to those applications filed to take imperative actions.

MSME Samadhaan- a sigh of relief for SMEs

The central purpose of launching the delay payment portal was to reinforce micro and small enterprises. It has given an authority to SMEs to file a case relating to delayed payments against defaulted customers and claim their unpaid dues with the help of government bodies. The Ministry of MSME set up a delayed payment portal, MSME Samadhaan, on 30th October 2017. It acted as a boon for several MSEs who were not able to claim their payments.

Hitherto, over 27,693 applications in regards to unpaid dues worth INR 7,212.23 Crores have been filed by (MSEs) micro and small enterprises as per the statistical data of MSME Samadhaan Portal.  From which 1,532 applications have been disposed of by the MSEFC while 4,474 applications were rejected and around 2,241 due cases were mutually settled with the buyers. Hence, only 7,447 cases are presently under consideration by MSEFC.

As mentioned earlier, no medium-scale enterprise can submit an application at Samadhaan, and only micro & small enterprises with Udyog Aadhaar Number (UAN) are eligible. UAN refers to a unique identity number which is acquired post-registration for (UAM) Udyog Aadhaar Memorandum.

MSME registration for Udyog Aadhaar Memorandum was started back in September 2015. However, only 7.7 million micro and small enterprises have registered under it. Since there are around 63.3 million MSMEs in India, it indicates that around 12% of MSMEs are eligible to apply to Samadhaan Portal.

The Reserve Bank of India also established an online platform, TReDS, in March 2014 to ease the discounting of invoices and bills of MSME suppliers. It is a financial arrangement wherein an MSME seller recovers the amount of the sales bill from a financial intermediary, after paying a fee or discount before it is due.

Receivables Exchange of India Ltd is the first TReDS platform that was incorporated on 26th February 2016. The ‘Strategy for New India @75’, was prepared by NITI Aayog, which clearly states that the Department of Public Enterprises must ensure the registration of all the public sector units on the TReDS portal.

Further, the financing and discounting charges are bored by the MSME suppliers, reduces their earnings. It deters numerous MSMEs from using the TReDS portal and drives them to reach out to the informal financers for invoice discounting, which enables immediate payment.

As per a notification issued by the MSMEs ministry on the 2nd November 2018, only the registered companies under the Companies Act 2013 having a turnover of over INR 500 crore can board the TReDS platform, which ultimately excluded many MSMEs.

A peek into the future of MSMEs

Central and State Governments jointly work together for the welfare of MSMEs. They have developed well-publicised schemes to foster the growth of MSMEs. Some of the Government schemes that help to shape the future of MSMEs are:

All the above-mentioned schemes have overlapping purposes of addressing the financial problems of MSMEs. It can lead to confusion amongst the beneficiaries and implementing agencies. Moreover, it may increase the administrative costs since each scheme requires its own staff and seal the deal with beneficiaries. Henceforth, it is indispensable to simplify the MSMSE schemes and policies.

As per the research conducted at the Institute for Studies in Industrial Development, a single-window solution must address the issues of delayed payments from both market players and the Government by encompassing an online payment, delayed payment redressal and invoice discounting.

Under such an online payment portal, both buyers and sellers could be able to register. After the seller makes a business transaction and uploads invoices for the same, MSMEs must get an option for invoice discounting if the buyer does not release the payment immediately or within the agreed time frame.

According to the statutory guidelines, if there is any delay in payment, then the issue should automatically move to Samadhaan Portal for redressal with an alert to both the supplier and buyer.

There is a need to spread awareness of MSME online platforms through campaigns as many small and micro-entrepreneurs are not aware of them. The system of digitization will be a perfect fit for MSMEs that can ease their operation.

Gone are the days when the large entities could overpower MSMEs by delaying their payments. MSMED Act, 2006 has made some stringent provisions for timely payments and initiated measures like Samadhaan and NeSL IU. Thereby, MSMEs no longer have to meek for timely payments from their customers. It facilitate the development and promotion of MSMEs and provides them a competitive edge. You can also avail the benefits of Government Schemes by registering under the MSMED Act, 2006. For legal assistance in MSME Registration, consult Enterslice.

Also, Read: All you Need to Know About MSME Loan.

Dashmeet Kaur is an experienced content writer, having proficiency in writing Legitimate content with comprehensive research. She also has a keen eye to detail and incorporating accurate facts.

There are two ways of raising capital. Either borrowing from banks or funds from promoters. Ban...

How to Set up a Tracksuit Manufactu...

Tracksuit Manufacturing Unit Tracksuits are generally worn by sportsmen and sportswomen. It is...

To facilitate the procurement of goods and services online Government of India has started E-ma...