A Simple Procedure of Limited Company Formation in UK 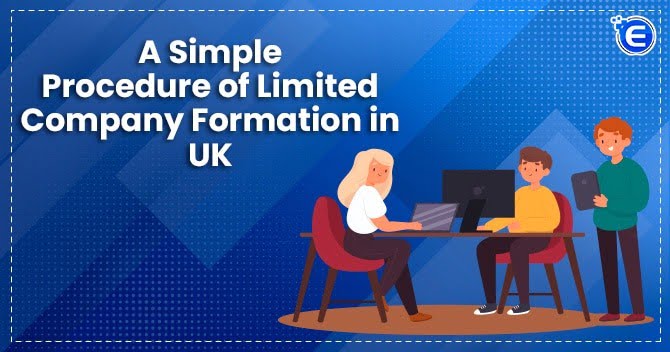 With the exit of the United Kingdom (UK) from the European Union, many companies want to realign their business arrangements with an independent UK. This calls for establishing business entities in the UK in order to continue tapping the UK market. For conducting business in UK, one of the legal entities employed by most of the companies is the vehicle of limited company. This article lays down the simple procedure of Limited Company Formation in UK.

What is Limited Company in United Kingdom?

The company limited by shares means they are owned by shareholders who have certain rights like voting and making changes in the company. Companies limited by guarantee have a ‘guaranteed amount’ instead.

What Is The Procedure Of Limited Company Formation In United Kingdom?

The procedure of Limited Company Formation in UK is quite simple and can be executed in the following steps. As a note of caution, before embarking on the journey of limited company formation in UK, it is advisable that one should check whether a limited company would be ideal legal entity according to the requirements of one’s business. There are other modes of carrying business such as self-employed, partnership, social enterprise, an overseas company, an unincorporated company etc.

A company need not attach ‘Ltd.’ after its name if the company is a registered charity or limited by guarantee as per the Articles of Association.

Another thing that needs to be kept in mind is that the name cannot be offensive or which suggests some connection with the government or local authorities, unless the permission has been obtained.

The company must have at least one Director who shall be responsible for running the company and maintaining the accounts and reports of the company. The director should be at least 16 years of age and disqualified from being a director. The Directors need not live in the UK but they can have a registered office in UK. Directors have to provide a ‘service address’ for correspondence purposes’ which will be publicly available.

If the steps discussed above are followed to the T by any person, then such person can successfully execute the task of limited company incorporation in UK.

Read Our Article: How to Incorporate Company in the United Kingdom?

How to proceed for Company Incorpor...

Malta is a member of the European Union and is considered as an attractive jurisdiction for com...

Provisions for Oppression and Misma...

The concept of Oppression and mismanagement helps corporate democracy find its roots. The term...

In Previous scenario, all the directors whether Indian or foreign national who already have the...