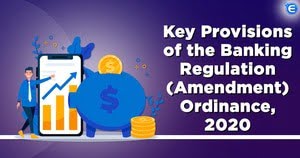 What is the main objective of the Banking Regulation (Amendment) Ordinance 2020?

What is excluded from the amendments?

This regulation does not apply to co-operative societies whose principal business is long term financing for agricultural development. Moreover, these societies should not use the term ‘bank,’ ‘banker’, or ‘banking’ in their name or connection with their business.  It also should not act as an entity that clears cheques.

From when does the ordinance take effect?

This ordinance allows the removal of exclusions for certain co-operative societies. It carries out activities such as reconstruction and amalgamation without moratorium shall take effect from the date of its issuance.

Scheme for reconstruction or amalgamation with the imposition of the moratorium: Banking Regulation (Amendment) Ordinance

The ordinance provides that the bank cannot grant loans or make investments in any credit instruments during the moratorium. Further, during the moratorium, the Reserve Bank of India can prepare a scheme for reconstruction or amalgamation of the bank if it thinks that such order is required to secure the bank’s proper management or in the interest of depositors, the general public or the banking system. The ordinance provides that the RBI can initiate such a scheme without imposing a moratorium.

With the prior approval of the RBI, the co-operative banks can issue securities such as equity and preference shares to its members or any person residing in its area.  These shares are issued at face value.subject to such conditions as may be specified by the RBI in this behalf.

Moreover, it can issue unsecured debentures, bonds, or similar securities with maturity of ten years or more to such a person. Further, the ordinance provides that no one would be entitled to demand payment towards the surrender of shares issued to him by the co-operative bank. Except as provided by RBI, a co-operative bank cannot withdraw or reduce its share capital.

Board of Directors to be superseded by RBI.

The ordinance provides that where a Co-operative bank is registered with the Registrar of Co-operative societies of a state, the RBI will supersede the Board of Directors after consulting with the relevant state government and in such a period as specified by it.

The ordinance provides that the RBI can, from time to time and on being satisfied that it is necessary to do, exempt a co-operative bank or a class of co-operative banks from certain provisions of the Act by notification in the official gazette.

The provisions mentioned above include restriction with respect to certain types of employment, qualifications of the Board directors, and appointment of a chairman. RBI shall specify the period and the conditions for such exemption

The ordinance omits several provisions from the Act (Banking Regulation Act, 1949). The details of which are specified below.

The Banking Regulation (Amendment) Ordinance 2020, has been seemingly made based on the character of PMC bank scam and crisis. The amendment has also brought in clarity concerning the exercise of power by the RBI and state. The RBI is set to regulate the functional side of the co-operative banks.

Understanding the Concept of Wholly...

Overseas investments in Joint ventures and Wholly Owned Subsidiaries have been recognized as an...

FFMC License is mandatory for all types of currency exchange business in India.This license is...

Artificial Intelligence (AI) has become an integral part of the finance industry. AI gives a co...