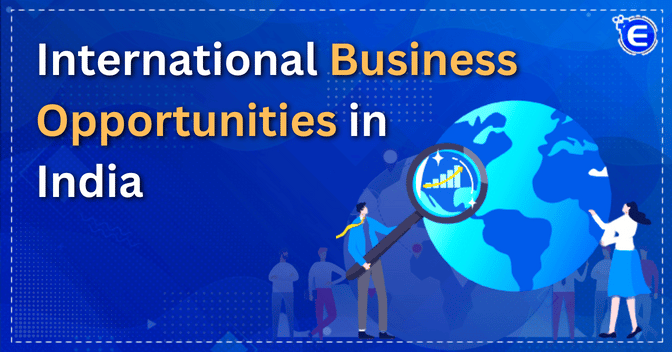 India, a land of immense opportunities, is becoming a preferred destination for global investors. India currently offers significant investment opportunities to any foreign business thanks to its expanding economy, enormous consumer market, and skilled labourers. The Indian government has also undertaken several initiatives to encourage accessible market entrance and foster international cooperation. But the possibility is far more intriguing. Based on the data released by the National Statistical Office (NSO) on 31 May 2022, India outshines the world’s major economies by becoming the world’s fastest-growing economy with a GDP growth rate of 8.7%! This article gives an overview of the international business opportunities in India.

Why is India perfect for international business opportunities?

1. Various initiatives and reforms such as Goods and Services Tax, Make in India, Digital India, Tech Parks, Land Acquisition etc., by the Government of India have led to positive infrastructural and economic growth in the nation. This step has facilitated the entry of more and more foreign entities into the Indian market. Following are some factors which have made India the perfect country for international business opportunities. Any international business looking to establish their mark in India must opt for Global Expansion Advisory from renowned consultants.

2. Growing Economic Influence: According to Lloyd’s Register Marine & University of Strathclyde, Glasgow, the centre of global maritime trade is expected to move from the Pacific to the Indian Ocean Region, thereby making India and China become the largest manufacturing hubs in the world by 2030! The Baker McKenzie and Mergermarket Group believe that in the next five years, India will have some tremendous economic influence across the Asia-Pacific Region, ultimately boosting the international business opportunities in India.

3. Flourishing economy: As per the latest statistics by NSO, India has become the fastest-growing economy. Also, according to The Department of Promotion of Industry and Internal Trade, the Government of India, India attracted the highest ever FDI inflow of $81.97 billion during the financial year 2020-21. Hon’ble Prime Minister of India, Shri Narendra Modi, has announced a special economic and comprehensive package of more than $270 billion, equivalent to 10% of India’s GDP, under the Atmanirbhar Bharat Abhiyaan (Self-reliant India).

4. Growing Global Competitiveness: India has jumped 79 positions from 142nd in 2014 to 63rd in 2019 in the World Bank’s ‘Ease of Doing Business Ranking 2020. India stands at 68th rank on the Global Competitiveness Index of 2018-19 by World Economic Forum. This indicates that India is rising to be the perfect country for international business opportunities. The Goods and Services Tax (GST), the ‘biggest tax reform’ in India since its independence, creates a common national market by integrating different indirect taxes.

7. Blooming Tech Sector: When it comes to technology, India is progressing by leaps and bounds. Some state-of-the-art technologies, such as Artificial Intelligence, have brought about some significant transformations in the industries in India. India is also seeing a substantial rise in the number of smartphone users, all because of these technological advances. In order to reach a more extensive customer base, many businesses are now switching to hybrid business strategies. Thus, the focus has shifted to improved customer services and better connectivity.

8. Empowered Group of Secretaries (EGoS) and Project Development Cells (PDCs): The Union Government of India has given the approval for the constitution of ‘Empowered Group of Secretaries and Project Development Cells’ in the Ministries to support, facilitate and provide a friendly environment to the investors. This will provide great help in developing international business opportunities in India.

9. Production Linked Incentive (PLI) Scheme: PLI is a scheme that aims at providing companies with incentives for incremental sales from the products that are manufactured in domestic units. This scheme invites foreign companies to set up their units in India. It encourages local domestic companies to set up / expand their branches in India, generate more employment, and help reduce India’s reliance on imports. An outlay of over $26 billion has been announced for PLI schemes in the Union Budges 2021-22 for these 13 sectors:

9. Investment Clearance Cell (ICC): The Hon’ble Finance Minister of India, while presenting the 2020-21 budget, announced the plans to establish an Investment Clearance Cell, to provide ‘end-to-end’ facilitation and support to all the investors, such as information regarding land banks, facilitating clearances at the Central and state level etc. This will prove beneficial in setting up international business opportunities in the country.

10. Largest youth population on the globe: As per the National Commission on Population, Ministry of Health and Family Welfare, Govt. of India, it is projected that the Indian population will rise from 121.1 crores (in 2011) to 152.2 crores (in 2036)! Even the United Nations Population Fund says that India has the largest adolescent and young population and will continue to have one of the youngest populations in the world up to 2030.

11. Affordable Human Resource: Another essential factor is India’s availability of cheap labour. It is home to many skilled and dedicated workers globally. Therefore, it significantly contributes to a rise in international business opportunities in India. Many companies, such as Amazon and Uber, have expanded their market base by acquiring this cheap human capital.

Thus, these mentioned pointers showcase great international business opportunities in India. There is immense scope for the development of businesses in India. Relaxation in FDI norms, increase in consumer demands and income, and increased governmental support towards industries in the form of numerous schemes such as Atmanirbhar Bharat Abhiyaan have improved the performance of the investment sector in India. To know more about the opportunities for setting up any international business in India and for Global Expansion Advisory, get the consultation offered by experts at Enterslice.

Anjul completed his B.A.LL.B (Hons.) from Barkatullah University. Additionally, he also holds a Master’s degree in law with a specialization in Cyberlaws and Cybersecurity from The Jagran Lakecity University. He chose to pursue a career in legal research owing to his interest in content writing.

Cyprus is a former British Colony, and the legal system of Cyprus is based on English Common La...

How to Obtain Certificate of Incorp...