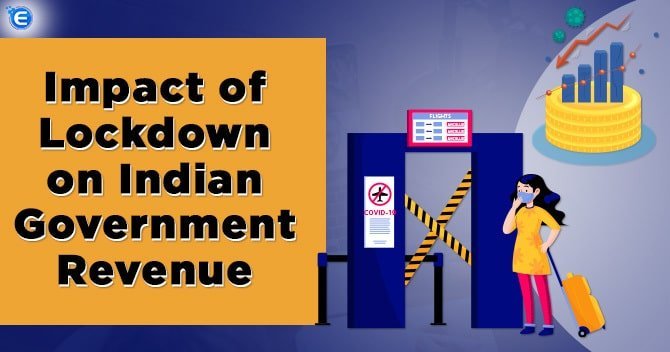 The Central government had expected a growth of 10% in the country’s nominal GDP (Gross Domestic Product) in the year 2020-21. Apart from it, many states had estimated their nominal GDP growth at about 8% to 13 %. However, all these estimates are going to take a massive blow due to the Covid-19 induced lockdown, which has already impacted Indian Government Revenue.

The central government had declared a nationwide lockdown in the month of March to thwart the spread of Covid-19 in India. The lockdown caused a halt of economic activities, and the movement of people for travel or work was stopped. Meanwhile, many people lost their jobs, and it is estimated that 140 million people have lost their jobs in India apart from many experiencing income deductions.

Having said that the Covid-19 and the subsequent lockdown is also expected to burn a hole in central and state governments pocket. This includes the tax revenue that they would have gained from the economic activities. Lower collections in taxes by the central government due to lockdown will also impact states’ share in them. It signifies how they can get affected by lower economic growth due to the lockdown.

Expectations on Indian Government Revenue before the lockdown

The central and state governments had passed their budget for the financial year 2020-21 before the lockdown this year.  As stated above, the central government expected 10%, and many states expected an 8% to 13% growth rate, respectively. However, due to the lockdown, the 2020-21 GDP growth rate is expected to be lower than these estimated figures. Resultantly the tax revenue generated by the Central and State governments will be much lower than the budget estimates.

As per data from union budget documents, 73% of revenue is expected to come through taxes for the central government. However, due to the lockdown, the actual tax revenue by the end of the year could be lower, depending upon how the nominal GDP growth in 2020-21 is affected.

While GST moves with the overall GDP, direct taxes will be dependent on the income growth of individuals and the profit of companies. In case of a lower GDP growth environment, the effect on these two may be more than the slowdown of the nominal GDP, thereby bringing down the tax GDP ratio.

Moreover, customer duties depend on the value of imports that may have lower growth. But it can be mitigated to some extent by the increase in the rate of excise duty on petroleum duty.

Apart from taxes, the center’s receipts comprise of non-tax revenue and capital receipts. A considerable amount of non-tax revenue is from dividends and profits from public sector enterprises and the RBI. In the case where the profitability is affected, then there can be an adverse impact on the revenue figures. The significant portion of capital receipts is budgeted from the disinvestment of public sector enterprises. Equity markets have fallen sharply during the last few months. In case equity markets remain volatile, the process of disinvestment and the disinvestment receipts could be affected.

Due to GST concerns, many states are looking to resume economic activities as per the permissions of the Home Ministry. Moreover, the opening of liquor shops, as well as increasing sales of petrol and diesel through transportation activities, is considered by states because taxes on fuel and liquor alone helps in generating about 40 to 50% state revenue.

Sales tax/VAT and State excise have been two major sources of revenue for states. With the implementation of GST, states can levy sales tax on petroleum products only and alcohol for human consumption. The lockdown has seriously impacted its consumption and also the sale of these goods as during lockdown, the transportation has been prohibited, and liquor businesses are also shut.

Due to the lockdown, the revenue generated from these taxes is likely to be affected seriously as compared to other taxes. Sales tax/VAT is generated from liquor sale and sale of petroleum products. Due to the reduced sale of these items, the collection of taxes has also fallen drastically.

The following measures can help the government to recover from the revenue loss:

The Indian Government Revenue has been affected by the lockdown. However, wise decision making can get them much needed relief and also help them achieve a long-lasting economic recovery.

RBI extends the Risk Based Internal...

The Reserve Bank of India released a notification regarding extension of Risk based Internal Au...

Buyers and sellers in international commerce are placed some distance away and are entirely uni...