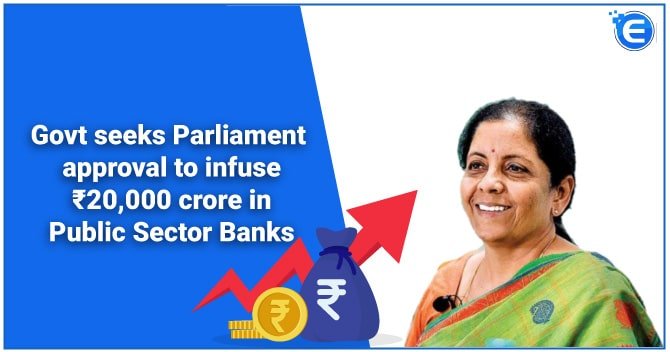 The Union Finance Ministry sought the approval of the Parliament to infuse 20000 crore into public sector banks in the current financial year to meet regulatory requirements. This is part of the first batch of supplementary demands for grants 2020-21 moved by the Finance Minister in the Lok Sabha.

What is the significance of this step?

This step assumes significance as capital infusion would provide support to state-owned lenders as the crisis due to the Covid -19 has put the borrowers under pressure. It has also increased the threat of higher non-performing assets.

The Finance minister tabled the first batch of supplementary demand for grants in the parliament, which reflect the additional expenses sought by various ministries over and above the amount allocated in the budget. Further, it also shows the spending appetite of the government.

According to the supplementary demand for grants document- for meeting the expenditure towards recapitalization of PSBs through the issue of government securities- 20000 crore. Capital infusion through Government Issue of bonds won’t impact fiscal deficit in the current financial year as there is no cash outgo.

As the budget for 2020-21 did not have any allocation for the recapitalization of PSBs, in the previous fiscal, the government had announced an infusion of 70000 crore into state-owned banks to drive credit for a strong impetus to the economy. During the year 2017-18 and 2018-19, the mobilization of Capital had taken place through budgetary provisions and recapitalization bonds.

Experts say that recapitalization of state-owned banks is a vital step towards propelling economic growth in the country. Kuntal Sur, partner at PwC, said that considering the impact of the pandemic on the economy, it is important for banks to provide credit support to get the economy back to the trajectory growth. He further said that if banks are burdened with non-performing assets, new credit inflows will be difficult. In order to make banks lend more, the government wants to infuse capital, which could have eroded due to higher pandemic provisions.

The stand of RBI

The Reserve Bank had also called for capital infusion into banks to help them deal with the issues of increasing bad loans and capital erosion of banks. The Governor of the Reserve Bank of India[1], Shaktikanta Das, had stated in the month of July that there are few stress points in the financial system going forward which may require constant regulatory and policy attention to mitigate the risks.

He further stated that the economic impact of the Covid-19 pandemic due to the lockdown and anticipated after lockdown compression in the economic growth might result in higher non-performing assets and capital erosion of banks. Therefore the plan of recapitalization for Public Sector Banks and private banks has become necessary.

The Reserve Bank had also said earlier that bad loans might rise to a 20 year high to 12.5% of total advances by the month of March 2021, and it had warned that if the economic conditions go further down, it may rise to 14.7% under the severely stressed scenario.

As stated earlier, the step to infuse 20000 crore into public sector banks may assist state-owned lenders as the country looks to deal with the repercussions caused by the Covid-19 pandemic.

The Government and Finance Ministry has introduced the LTC Cash Scheme and other festive scheme...