GAAR accounting and its Scope to combat tax evasion 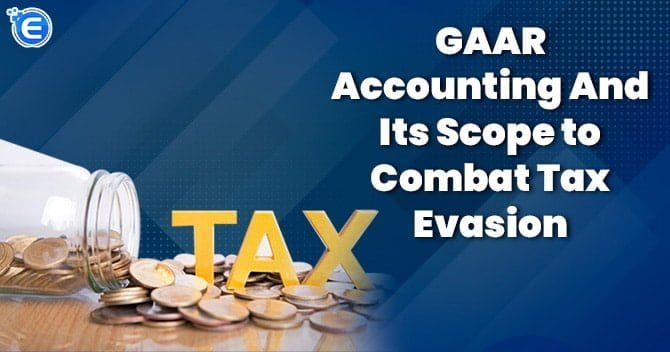 The provisions for General Anti-Avoidance Rules (‘GAAR’) were added to the Income Tax Act of 1961 (‘Act’) on April 1, 2017, by way of introduction of Chapter-XA. According to the General Anti-Avoidance Rule requirements, a taxpayer’s arrangement may be considered to be an Impermissible Avoidance Arrangement (or ‘IAA’) and the tax consequences in relation to it may be assessed in accordance with the regulations.

GAAR has been viewed as a strategy to combat tax evasion and aggressive tax planning, particularly transactions or business arrangements that are executed with the intent to avoid paying taxes. Because of the implementation of General Anti-Avoidance Rule in India, firms have had to examine and revalidate their transactions in this fast-changing environment.

The enabling provision is found in Section 95 of the Act. The chapter begins with a notwithstanding clause and thereby supersedes all other sections of the Act. According to the requirements of Section 95 of the Act, General Anti-Avoidance Rule shall be applied to the assessee who enters into an agreement or arrangement that is regarded as an Impermissible Avoidance Arrangement under Section 96 of the Act. Furthermore, the tax evaded by engaging in such a transaction may be evaluated in line with the provisions of Chapter X-A of the Act.

An Impermissible Avoidance Arrangement (or “IAA”), as defined in Section 96 of the Income Tax Act[1], is an arrangement whose primary objective is to secure a tax benefit. In addition, it does the following:

Section 97 of the Act addresses the following transactions that may be found to be lacking a commercial substance:

Round-trip financing refers to a kind of financing in which the money is transmitted among the parties to the agreement and the transfer of such money results in a tax benefit.

In this context, an Accommodating Party is a party to an arrangement whose primary reason for direct or indirect involvement in the arrangement, in whole or in part, is to get a tax advantage, directly or indirectly.

The GAAR clause does not apply in the following circumstances:

Regarding restriction, it is specified that, without prejudice to the above points, the General Anti-Avoidance Rule rules shall apply to any arrangement or agreement, regardless of the date on which it was entered into, in respect of the tax advantage gained from the arrangement on or after 1 April 2017.

When a portion of an arrangement or agreement is judged to be an unlawful avoidance arrangement under the Income Tax Act, the tax consequences are evaluated exclusively with reference to that portion. The following are the implications:

The detailed methodology for invoking GAAR is as follows:

It is anticipated that General Anti-Avoidance Rule would provide the tax administration with far too many discretionary powers in the name of combating tax evasion. Because it grants the tax authorities unrestricted authority to investigate any transactions or arrangements, it may lead to a rise in tax litigation. Because the relevant burden of proof is on the assessee to demonstrate that the purpose of engaging in a transaction or arrangement is not to achieve a tax benefit, the assessee must maintain adequate business reasoning and document the evidence to prevent such circumstances.

The General Anti-Avoidance Rule (i.e., GAAR) is a concept that typically authorizes a country’s Revenue Authority to reject tax benefits to transactions or arrangements that have no business substance and the only objective of such a transaction is to get the tax benefit. The necessity for the enactment of General Anti-Avoidance Rule is typically supported by a rising issue that the integrity & correctness of the tax regime has to be reinforced.

Understanding the Concept of Statem...

The Income-tax law has structured the concept of statement of financial transaction or reportab...

The Indian Accounting Standard has been prescribed by the Institute of Chartered Accountant of...

To phase out the flagship Merchandise Exports from India Scheme (MEIS). The commerce ministry h...