Guide on the Foreign Venture Capital Investment (FVCI) in India 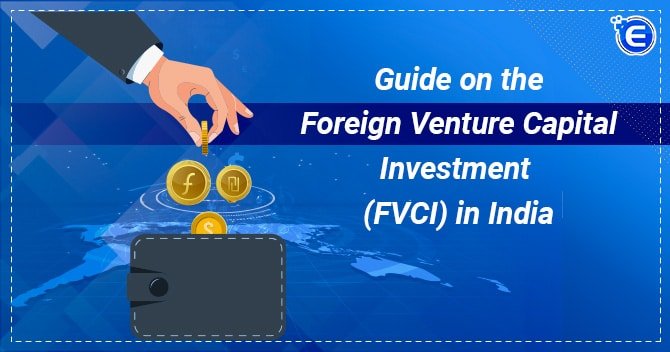 The investment made by FVCI is governed by the Regulations framed by Securities and Exchange Board of India (SEBI) and the Foreign Exchange Management Regulations.

The term “foreign venture capital investor” has been defined under Regulation 2(g) of the SEBI (Foreign Venture Capital Investors) Regulations, 2000 wherein FVCI is defined as an investor that has been incorporated and established outside India and also registered under these regulations and also proposed to make investments in India according to the necessities of these regulations.

From the above two definitions, it can be concluded that there are three essential criteria in order to qualify as a foreign venture capital investor in India. They are:

Regulation 4 of the SEBI (Foreign Venture Capital Investors) Regulations, 2000 lay down the Eligibility criteria for an entity to qualify as a foreign venture capital investor in India. The regulation states that before granting the certificate of a FVCI, SEBI will take into account the following conditions for eligibility:

Types of Investments made by FVCI in India

SEBI has laid down certain guidelines within which a VCFI is allowed to make investments and not beyond that. SEBI states that a VCFI can only invest from the “investible funds” which is the corpus of funds committed for making investments in India and includes the net expenditure for managing and administering of funds. The restrictions can be found in Regulation 11 of SEBI (Foreign Venture Capital Investors) Regulations, 2000. An FVCI can invest in the following manner only:

Minimum investment of 66.67% of the investible funds has to be invested in the equity-linked instruments or unlisted equity sharers of a VCU

Not more than 33.33% of the investible funds shall be invested in the following manner:

An FVCI is permitted to make 100% of its funds in a domestic VCF registered with SEBI. However, before making such investment, the FVCI needs to make the following disclosures to SEBI about the investment strategy chosen by itself and the life cycle of the funds. Apart from the above mentioned duties, an FVCI has much other compliance while making such investments.

Maintenance of Books and Records

Power to call for information

A combined reading of section 10(23FB) and 115(U) reveals that VCFs are exempt from taxation on any income earned from investment. However, when such is distributed to investors, it becomes taxable. Thus in practice the FVCU does not get any tax exemption. The only resort that a FVCI has is to reap the benefits offered by the DTAA. For example India and Mauritius have a DTAA between them and the capital gains earned by a resident in Mauritius shall be taxed in Mauritius only and not in India. The fact that Mauritius does not have any tax on capital gains makes it even better proposition for companies to open their businesses and maintain their residential status at Mauritius and not India.

Advantages for FVCIs in India

It is not that VCFIs do not get advantages in India. In order to attract investments in India, VCFIs have been given a number of relaxations such as:

What are the sectors where FVCI can make investments?

FVCIs in India have been allowed to invest in the following sectors:

Procedure for registration of FVCIs in India

For an entity to register itself as a FVCI, an application has to be made by an applicant in Form A of the FVCI Regulations asking about details and other supporting documents. Fee has to be submitted as has been prescribed in Part A of the Second Schedule and the same needs to be paid in the manner provided in Part B of the same schedule of FVCI Regulations. Once the application is received by SEBI, then SEBI analyses it and raises any objections or grants certification to the applicant.

Exit strategy for FVCIs in India

Exit strategy refers to the method adopted by the FVCI to make an exit with all the investments made in India in the past. An exemption has been given to FVCIs where they can all their securities at a rate that is mutually acceptable to both parties. Since, the government has not put any restrictions on the exit strategy, it gives a sense of security to the investors that their investments in India will not be jeopardised.

From the above discussion, it can be concluded that FVCI is an important tool of promotion of the Indian enterprise and innovation. They give fillip to raw knowledge based ideas and technology and transform them into a means of commercial production. The regulatory framework of India with respect is an attractive one with clearly laid down policies related to eligibility, registration, responsibilities and restrictions on investments for an FVCI.

Further, a number of factors make it favourable for FVCIs to turn to India to grow their investments such skilled and competent workforce, Research and Development, policy support etc. The initiative of Start-up India is another factor that has attracted investment. The government has been making efforts to make venture capital industry proper in India and fill the void between the finance from the banks and capital requirements of new start-ups in the country.

A detailed study on Foreign Venture...

Over the years, India has relaxed the norms related to Foreign Direct Investment (FDI). Foreign...