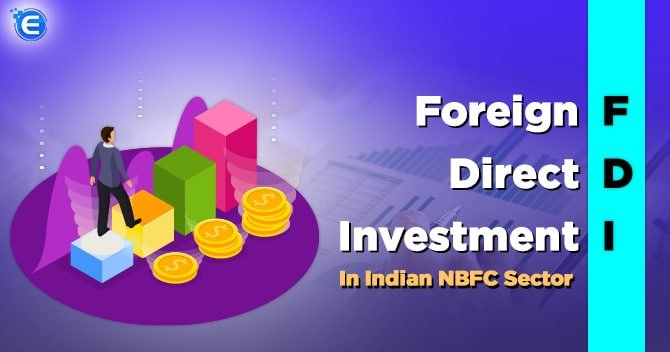 A Non-Banking Finance Company (NBFC) is the company which is incorporated under the Companies Act, 2013 to provide loans and advances to the individual and corporates similar to a bank but is not registered under the Banking Regulation Act. This article describes the FDI in NBFC Sector.

The main function of Non-Banking Finance Company and a bank is to provide finance to its customers and they are alike the same in many activities such as providing loans and advances, credit facility and such other schemes, i.e., Insurance.

But there are major three differences between Bank and NBFC:

A Non-banking finance company provides full support to the bank as it is able to provide services to those geographical areas where the bank is unable to reach and has limitations in providing the services to the marginalized section.

The non-banking finance company sector has been a boon to the Indian lending Industry as it has significantly contributed to the growth of the economy. It has contributed more than the banks due to the lower cost and less regulatory compliances involved in NBFCS than the banks.

Read our article:What are the Regulatory Requirements of Non-Banking Financial Company in India?

Is FDI Allowed In NBFC Sector?

Foreign Direct Investment, FDI in NBFC Sector is the investment made by a foreign entity into the business of India by having controlling ownership.

Foreign Direct Investment has been regulated by the Foreign Exchange Management Act, 2000 and has been governed by the Reserve Bank of India.

FDI in NBFC Sector is made through either the government route or FDI automatic route.

Foreign Direct Investments has always been treated as a complicated procedure as there has always been a regulatory discomfort in allowing the foreign direct investment above the minimum capitalization norms.

With time, the perspective of government has changed, and for ease of business, foreign direct investment has been allowed up to 100% in many sectors by the Government of India.

In the Non-Banking Finance Sector, it has been allowed to 100% under the automatic route vide Notification dated September 09, 2016.

According to the Reserve Bank of India Notification dated September 09, 2016, an amendment has been made into the Foreign Exchange Management (Transfer or Issue of Security by a Person Resident outside India) Regulations, 2000.

Before the said notification, 100% FDI was allowed under automatic route only when the NBFC was engaged in the 18 prescribed activities which were divided into fund-based and non-fund-based activities with the minimum capitalization norm.

Capitalization Norms for Fund Based Activities

Capitalization Norms for Non-Fund Based Activities

After the said notification, 100% FDI is allowed under the automatic route under the head ‘other financial services’ with no other restrictions.

Significant Changes under the notification:

Impact of RBI Notification on FDI in NBFC Sector

See Our Recommendation: How to Raise Fund in NBFC, Is FDI a Good Option?.

Entities which are allowed to raise Foreign Direct Investment are available to borrow External Commercial Borrowing, Entities such as:

Under the Automatic Route

The non-Banking Finance company can only take a loan for the following purpose:

Allowing 100% FDI in NBFC sector is a game-changer for the Indian economy as it helps the sector in growing at a larger scale and helps in making this sector a great contributor to economic growth. Non-Banking finance company contribution is higher than any other sector in the economy growth.

Foreign direct Investment has improved the capital inflow of the Non-Banking finance sector so that NBFCs can invest in large projects or meet the daily needs of the business. Foreign direct investment has also helped in removing the domestic monopolies which were held by the large investors, and it has given an advantage to the NBFCs in the competitive market.

It can be rightly said that FDI in NBFC Sector has become the backbone for the Non-Banking Finance companies and helped them in achieving their vision and objectives efficiently.

Bhawna Dang is a competent and skilled professional, holding an educational background in M. Com, Company secretaryship and LL. B. She holds ample experience of 4 years working as an Advisory Associate with a blend of corporate background. She has extensive knowledge in handling matters relating to Reserve Bank of India and has also worked on various secretarial and listing compliances of corporates.

Lending Rules for NBFCs Under Reser...

Reserve Bank of India is playing a regulatory role in the NBFC sector. NBFC can neither run the...

FERA stands for the Foreign Exchange Regulation Act, 1973, by the Indira Gandhi’s government;...