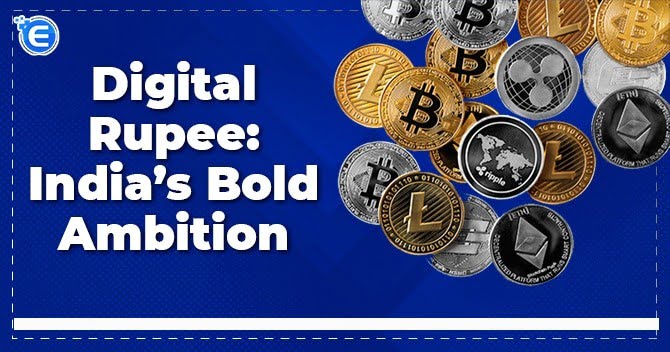 The Finance Minister announced the introduction of digital rupee- a central bank digital currency from 2022-23. This announcement was made in the Union Budget for 2022-23. The Finance Minister, in her address, remarked that the introduction of digital currency will boost the digital economy, and it would be based on the blockchain technology. This article seeks to apprise its readers about the Digital rupee and also explain how this currency will be different from wallet and UPI payment systems.

What is Digital Rupee?

Digital Rupee is the central bank digital currency which is a legal tender issued in a digital form. It is similar to a fiat currency, but its form is different, and it is exchangeable one-to-one with the government-issued money. In simple words, this currency is the same as the legal currency that we use today. The only difference being it’s in a digital form.

Digital form of currency also gains more significance because of the set of benefits it offers. For example- Government will be able to save on the cost of printing physical currencies. Moreover, transactions would be quicker and will be accessible in remote areas of India.

Another crucial benefit of digital currency is that it will be centrally regulated currency, unlike cryptocurrency. Due to this, the volatility risk will be mitigated as is seen in the case of bitcoins.

CBDC on a Global Level

Bahamas was the first country to introduce a nationwide central bank digital currency. Nigeria also issued one and countries like China, Sweden and Japan are also experimenting with retail CBDC. Global experiment with CBDC helps us to know some of the risks like threat to privacy and confidentiality. Hence global cases update us on how to ensure balance between benefits and risks.

As per a BIS survey in January 2021 it was found that close to 86% of the central banks were engaged actively in researching CBDC, whereas 60% were conducting test of the underlying technology, and 14% were already in the pilot-project phase.

One of the large economy where a central bank digital currency is being experimented on a national level is China. It had to go for a CBDC due to lack of competition to two large players in digital payments.

How will Digital Rupee work?

This decentralised nature is effective for only blockchain technology and its network of computers in case of digital rupee. RBI[1] needs to set up this network in the future however, blockchain network shall be limited for bank and related entities. Hence CBDC may require an underlying system for issuance and distribution to the public thus, RBI may need to include various other players in the network such as public and private banks, payment system providers etc.

Digital rupee in the midst of UPI

So the introduction of digital currency by the Central government has grabbed many eyeballs, but how will it fare with digital payments already in place. As per experts with the implementation of digital currency, the success rates of transactions will rise. It will have a lesser failure rate as opposed to UPI, which has a failure rate of 1.2-1.3%, which is substantial considering large transaction volume.

Vishnu Gupta who is the founder and director at Nonceblox blockchain studio said that digital rupee would increase the transaction success rate efficiently moreover, UPI has also witnessed reduction in transactions.

Another expert commented that the success rate of UPI payments is roughly 98.6%. On a scale of billion transactions in a month, there is a significant gap. Digital rupee transactions through UPI can improve efficiency by mitigating the settlement risks and the instances of transaction failures. So the, digital currency can complement the digital payment modes and make a great impact.

Anything that is in digital form possesses significant risks from cyber-attacks and threats. Hence this digital currency may also be subjected to cyber hacks and cyber threats that can disrupt services, result in attacks to user devices and payments applications. If the government is unable to safeguard from cyberattacks, then it can jeopardise the entire CBDC system and it may have further negative consequences where the public may lose confidence in the ecosystem.

Further, with the introduction of digital currency, the transactions will be validated for security purposes and transaction details will be stored in distributed ledger. This can invoke threat to privacy. Hence there is a need for having a proper co-ordination between the government agencies and regulatory bodies so that a good information collection framework is made.

Another risk in this system is that a sizeable amount of Indian population still don’t have a smartphone, and out of those who have a sizeable amount don’t use mobile payment banking or digital payments in their daily life. Hence this can have a drastic impact on financial inclusion. Hence government should consider these points earnestly.

Well, the digital rupee will be part of the currency in circulation, and it will not replace traditional currency. The government will not require printing the amount of physical notes that they are printing right now.

The Finance Minister had announced the launch of digital rupee in her budget speech. Once the cabinet approves it, the government will ask the central bank to focus on its launch. The ground work has been laid, so it seems that Digital Rupee will be introduced sometime this year. However well planned and properly evaluated implementation should be the primary objective. Rushing its implementation may invoke unnecessary risks.

Corporate restructuring through Compromises, arrangements and amalgamations is provided under t...

An overview of the 2022 Budget

As always, there have been mixed responses from the industry and people with respect to the cha...