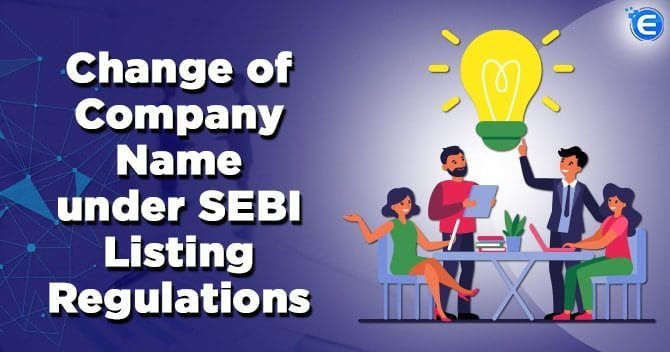 Procedure for Change of Company name

The following is the procedure for change of Company name under the Companies Act 2013:

Rectification of the name of the Company

The term rectification is different from changing. Rectify means to correct an error or mistake. A company would require rectifying its name, if there is some adverse response by a third party on the name of the company. Other situations would include where the company has used a similar name of another company.

When the change of company name takes place when the company alters its memorandum, then the notice of such change must be mentioned within 15 days to the registrar of companies along with an order to the central government. Necessary changes will be made in the certificate and the memorandum of the company.

What are the legal effects of change of company name?

If Change of Company Name under SEBI and has taken the necessary steps to inform the registrar of such change in name then legal proceedings against the new name will cease to exist. This was considered in the case law of Malhati Tea Syndicate.

Procedure for Change of Company Name

After the resolution has been passed the concerned individual would make an application regarding the same to the Ministry of Corporate Affairs (MCA). The procedure to be followed for change of company name would be the same as forming a new company under the company’s act 2013.

Once this resolution has been approved by the company the same must be filed with the registrar of companies.

The Government of India has brought out regulations related to managing of securities in a stock exchange. This regulation is known as the Securities and Exchange Board of India (Listing Obligations and Disclosure Requirements) Regulations, 2015 [SEBI (LODR) Regulations 2015].

According to section 45 of the SEBI LODR regulations, the company has to follow particular conditions:

Listed Entities under this regulation are allowed to change the name of the company. However, the following requirements have to be complied by the listed company:

Document required to be submitted

Documents submitted to the stock exchange for in- principal approval:

Documents submitted to the stock exchange for Final approval:

A company which is registered under the company’s act 2013 would require following the change in name procedure in accordance to the rules prescribed by the MCA and ROC.  A listed company would have several obligations in change of company name. A listed company would require fulfilling the obligations under the SEBI LODR regulations first, and then follow compliance for change of company name under the companies act.

The economic slowdown due to the Covid-19 pandemic has had a severe impact on a number of indus...

Given the magnitude and extent of its spread, the pandemic “Covid-19” is not only causing h...