All about Forensic Audit of a Company in India 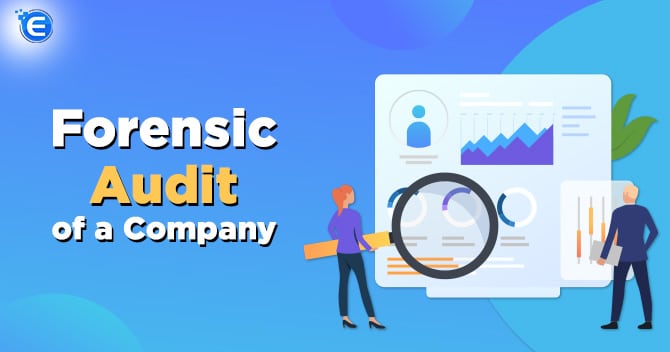 In today’s world, increasing white-collar crimes has led to the need for bringing in the forensics to save a business from any mishap. Crimes that are taking place using deceptive practices for financial gains are often tricky to prosecute, as the executioner takes sophisticated and calculated steps to ensure that their illegal activities are difficult to detect.

With the introduction of the definition of fraud in the Companies Act 2013, the concept of Forensic Audit in India as a practice and methodology has gained colossal importance and relevance in addition to the regular auditing techniques already in place.

What is a Forensic Audit in India?

A forensic audit is the inspection of a company’s financial records to gather evidence for use in legal proceedings regarding any accounting frauds. The corporate veil is lifted while identifying the fraud and the persons involved. Audit skills have to be applied to determine legally if fraud has taken place. The steps of an investigation process include planning, review, and a report. In the planning stage, objectives such as – identification of fraud committed, since when is the scam happening, who is involved, how much is the financial loss, fraud prevention measures, etc. are set.

Audit Engagement is one of the essential blueprints to be designed with the help of business owners and Audit Experts. It helps in finding the key areas which need to be focused and further work for excellent results. However, the forensic auditing is not the same as financial audit or secretarial audit; in aspects of objective and procedure as both differ long way. To support the success of the Indian economy on the global platform under the realm of good governance, transparency, accountability, and uprightness, the Forensic Audit has become the main indulgence in the corporate world.

Forensic audit in India extensively has a crucial role in supporting the business enterprise for concentrating on efficiency. On the larger parameters, Forensic audit as tool-mix of accounting and investigation is serving all the five E’s of good governance and make the corporates to grow and develop on the parameters of being Effective, Efficient, Easy, Empower, and Equity.

Who can conduct Forensic Audit?

Forensic auditors do not differ from other legal professionals; They investigate accounting and different reliable settings by combining their knowledge of accounts, law, finance, and investigating skills to find evidence of corruption or financial crimes. The professional goes beyond looking into the financial statements, which includes examination and investigation, bringing out evidence, writing reports, understanding the legal scope of the evidence, and ways to prove it in court. Starting from collecting evidence to examining the shreds of evidence, later zeroing the culprit behind the fraud to appearing in the court for submitted the testimony, a forensic auditor plays a vital role as a part of his responsibility.

The evidence gathered is in a manner that is usable in court. A report is then produced with the findings of the investigation. Such findings may also be presented in court. Process of conducting a forensic audit is outlined below:

Forensic reports deliver findings and recommendations of the forensic investigation conducted. Details regarding the causes, circumstances, illegal or potentially fraudulent activities. The Forensic audit was used wisely and significantly to reach the core of the fraudulent transaction. We will understand with the help of Nirav Modi and Punjab National Bank Scam. (A detailed analysis)

How did the scam begin?

What happened further after the Fraud was detected?

The present findings of the investigation are-

How the scam could have been avoided

The Reserve Bank of India has looked upon the deteriorating quality of assets and contrived forensic audit obligatory for large advances and re-structuring of accounts. The Enforcement Directorate (ED) and the Serious Fraud Investigation Office (SFIO) also stress upon the need for forensic audit pertaining to the rise in money laundering and willful default cases that is bothering the banking system.

Forensic Audit in India is still unaccustomed and yet to be experienced on a large scale. It provides a clear understanding of the financial position along with the connection of the communications related to that and discovering any serious frauds, which is unusual for the business culture. With the alarming situations of Money Laundering cases, the Forensic Audit is the need of the hour. It is to be said that, to find the main culprit, one should get to the basics of the investigations. We are not surprised by the given fact how the incidence of corporate fraud is on the rise. But other spaces too are exposed to fraud, which is why the scope and need of forensic auditing are getting wider.

Also, Read: USE of Artificial intelligence in Fraud, Misconduct Investigations.

Ramanan Murali is an innovative and industrious Legal professional, having a keen interest in the matters related to the Corporate Law. He is well-indulged in registration and compliance matters of NBFCs with the Reserve Bank of India. As a legal professional, he is zealous about analysing and understanding the actualities of White-Collar Crimes, Corporate Functioning and Indian financial sector.

What Are Some Tips to Improve Payro...

It is important to get the payroll right. Companies make mistakes everywhere, which can lead to...