A Complete Synopsis on Accounting for Film Production Cost 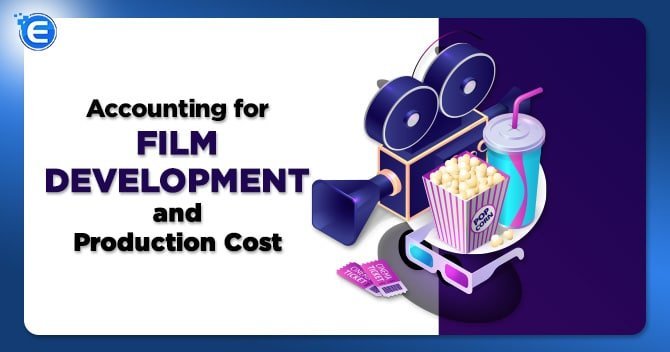 The basic need in the production of a film is providing good content for developing and producing it as a film. There are some other contents that attract the viewership, which can be monetized through theatrical release and also by licensing to the distribution channels such as some television or digital platforms. Accounting for film production costs may lead to some unpredictable outcomes. This industry has many significant issues, such as what are the costs to be capitalized and when should the accounting process starts and when to end. It is also very difficult to decide on the accounting classification. The monetisation of the resulting asset must also be checked here. In this blog, we will discuss the various accounting issues present in the media and entertainment industry.

How are Assets Classified in Accounting for Film Production Costs?

The Accounting standards used in accounting for film production costs are:

However, no specific guidance has been provided to the industry. In practice, applying the relevant standards requires careful consideration of the specific facts and circumstances.

How is AS 26 and Ind AS 38 used in Accounting for Film Production Costs?

The costs incurred in the ‘research phase’ are mentioned as expenses incurred, while the costs made in the ‘development phase’ are capitalised after recognizing all the criteria. ‘Development’ is the basic application of research to a plan or design in a production content before the start of commercial sale.

After the completion of the given criteria mentioned in AS 26 and Ind AS 38 requires capitalisation of development costs.

The capitalisation criteria provided under the intangible assets standard and the inventory standard are similar but not identical. The entities need to decide on which standard to apply in the accounting of film production costs.

The classification as intangible assets/inventory/ film development and production costs can also be covered under the scope of AS 7 Construction Contracts or Ind AS 115 Revenue from Contracts with Customers.

According to AS 7 and Ind AS 115– a film that is being made for a single customer under a single contract.

As per AS 7 or Ind AS 115, the costs and revenues made here are usually specified in the income statement based on the percentage of completion.

Which Accounting Standard must apply in Accounting for Film Production Costs?

The film development and production usually fall under the scope of intangible assets except when the film is producing content that could be sold to anyone and for which the producer retains no or little intellectual property rights (IPR).

The examples mentioned below will clear the concept of classification of assets:

Instance 1: Film production where Some rights are retained

Film producer AB Ltd., from Bhojpuri film industry, is creating and producing a niche film. The film will be distributed locally and in pan-India theatres and subsequently through digital platforms. AB Ltd. also wants to retain and license the post-release television broadcasting rights to a national broadcaster, but the international television rights will be sold off to another party.

How should the accounting of film production cost be classified?

The film costs will meet the definition of an asset (assuming that all the asset recognition criteria are fulfilled), whereas the revenues generated from the theatres or digital platforms and by retaining the license of national television broadcasting rights are likely to be much higher in this instance rather than the international broadcasting television rights. The most appropriate treatment is to recognise the intangible asset.

Instance 2: Film production for sale without Retaining Any Rights

Film producer BZ Ltd. produces documentary films for distributing to the geographic channels. At the time of production and development, there is no sales arrangement in place, but BZ Ltd. has a successful track record of producing and selling documentary films. BZ does not expect to retain any rights to the film documentaries following their sale.

How to classify the film development and production?

The documentary films are identifiable non-monetary assets without physical substance. It is produced for sale in the general business. Provided that there is no specific arrangement in place with a third party, B Ltd. will probably account for the production costs as inventory.

Producer CD Ltd. is hired by a film studio to develop and produce a film and in return earn a fixed fee for the service. CD Ltd. retains no rights in the film.

How to classify the film development and production costs here?

The rights in a finished film are identifiable non-monetary assets having no physical substance. In the normal course, it is produced for sale, but they are also concise to a single contract. Considering that the outcome can be estimated, costs are recognised as incurred, and revenues are recognised based on the percentage of completion under AS 7 or Ind AS 115.

After determining the appropriate standard to follow, at what point the film costs will be capitalised and which costs must be capitalised?

The basic premise under both inventory and intangible assets standards is that there must be some probability that the capitalised asset will bring economic benefits in the future. By assuming the point at which the asset recognition criteria are met will usually require clarity and will be dependent on previous experiences.

The selling/ promotion and related marketing costs are always calculated. Though it is expected that such expenditure will bring future benefits, yet these benefits cannot be separated from the overall business development, and it does not meet the definition of an asset mentioned in accounting standards.

A film producer produces a film that is intended to be distributed across India and retains the intellectual property rights, i.e., distribution and ancillary rights, etc. The starting point of capitalising the costs occurs when there is complete evidence that all the recognition criteria set have been met.

The initial pitching phase, the ‘research’ phase, which is undertaken with the idea of understanding the potential market regarding the film and the talent of the director and actors in it. As there will be no intangible asset in the research phase, any cost shall be expensed as incurred.

The capitalization of the calculated costs will cease when the asset operates in the manner as expected. In other words, this means that film cost capitalisation would usually cease once the film is ready for release.

Whether the film producers present their capitalised film costs as intangible assets or inventories, they generally select the amortization method that most appropriately reflects underlying economic reality subject to pragmatic constraints such as simplicity of application and the availability of reliable data. In that sense, the presentation as inventories or intangible assets may be considered as irrelevant.

Amortisation is the systematic allocation of the depreciable amount of an intangible asset over its useful economic life. The allocation method should reflect the pattern in which the asset’s future economic benefits are consumed by the company. If that pattern cannot be measured reliably, the straight-line method must be used. Under AS 2 or Ind AS 2, costs are recognised in the income statement as revenue is earned.

An impairment test is done when, due to an event or change in circumstances, the amount of unamortized film costs may exceed their recoverable amount. The recoverable amount is always higher than the estimated fair value, less costs to sell or value in use.

Any write-off done is calculated as the carrying amount by which unamortized capitalized film costs exceed the recoverable amount. The impairment indicators can be both internal and external. Few examples are explained below:

The Pre-release effects generally occur when there is any adverse change in the expected performance of a film prior to the release. Such adverse changes are associated with:

The costs incurred in developing and producing films, especially blockbuster movies, are significant. The outcome of the film is very unpredictable, and it can be a hit as well as a miss. There are some essential considerations regarding the classification, capital issues, payments to be made, impairment of film costs as inventories, or intangible assets. The points mentioned in this article are not exhaustive, but it provides a brief idea for media and entertainment companies about how to account their film development and production costs.

Payroll services refer to company’s list of employees. The term is mainly concerned with the...

Overview One of the main aims of the Insolvency and Bankruptcy Code, 2016 was resolution in a t...